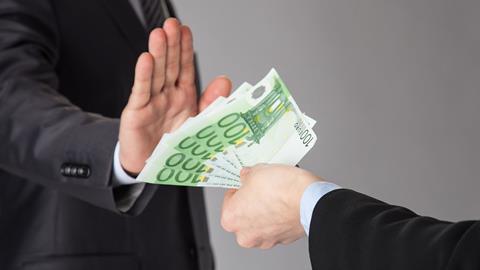 Global coatings manufacturer Hempel has reached a settlement with Danish and German authorities and agreed to a fine of 220 million Danish krone (U.S. $33.3 million) concerning bribery payments made to ship managers in Germany.

The fine will be paid to SØIK (the Danish State Prosecutor for Serious Economic and International Crime) and the prosecution authority in Kiel, Germany. “DKK 123 million was expensed in Hempel’s financial statements for 2016, with the remaining part in the financial year 2018,” Hempel said.

The fine is the result of numerous illegal sales practices that took place in Europe and Asia, which Hempel said it uncovered and self-reported to SØIK in April 2017. According to Hempel, its internal rules were deliberately circumvented. “The unlawful activities were a direct attack on the integrity of Hempel’s customers, culture, values, and all our colleagues,” Hempel Chief Executive Officer Henrik Andersen said in a statement announcing the settlement on 4 March.

Hempel said the unlawful practices were stopped immediately and, following an internal investigation by its board of directors and the executive management board, all involved were replaced. This included seven employees in Germany who were “dismissed for gross negligence in performing their duties,” the company announced in 2017.

Additionally, the board and executive management “proactively launched thorough compliance investigations in other relevant jurisdictions worldwide in the Hempel Group with the assistance of external global advisors from the audit and legal industry,” the company said. Consequently, “we have also had to reorganize in other jurisdictions, and three senior executives have left Hempel due to gross negligence,” Andersen said at the time.

“We have made substantial investments internally and externally to prevent compliance issues from happening in the future and to re-establish that trust,” Andersen said. “That is the price we have had to pay for being non-compliant. We have cleaned up and moved on.”

Among the compliance investments Hempel has made include strengthening and improving cooperation between the audit committee, executive management board, and Hempel’s compliance functions; appointing a group internal auditor and significantly upgrading the group’s internal audit resources; and upgrading Hempel’s whistleblower system to an externally operated system—known as the Hempel Ethics Hotline—that is open for reporting by employees, customers, suppliers, and other Hempel stakeholders.