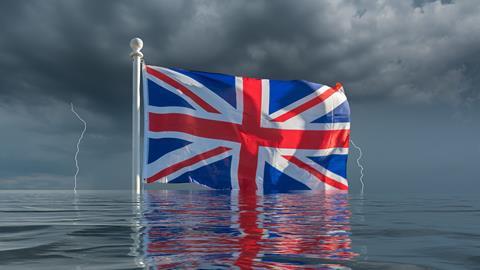 The third time was not a charm for British Prime Minister Theresa May. Her version of a Brexit deal, once again put before parliament, was rebuked by a 344-286 vote in the House of Commons on Friday.

The balloting, in large part, was needed to secure an extension of Article 50 to 22 May, rather than the United Kingdom having to exit the European Union on 12 April. The vote was called on the date Brexit was originally scheduled to take place. The U.K.’s Labour Party, critics of May throughout the contentious process of separating from the European Union, summed up the tally thusly: “A government in chaos; a country in crisis; another defeat for Theresa May.”

A government in chaos.
A country in crisis.
Another defeat for Theresa May.

Prior to the vote, May—who promised to resign if her plan was approved, letting her successor guide future implementation details—made one last pitch.

“Today should have been the day that the United Kingdom left the European Union,” she said. “That we are not leaving today is a matter of deep personal regret to me. I remain committed to the U.K. leaving the European Union and that is why I bought this motion to the House today. There are those who will say [they have] rejected every option so far, you’ll probably lose again, so why bother? I bother because this is the last opportunity to guarantee Brexit.”

“To secure this extension and give us a firm exit date, we do not need to agree the whole deal today—just the withdrawal agreement,” May continued, amid loud interruptions from disgruntled Members of Parliament. “What this motion today does is give us the time we need to pass the necessary legislation and complete the current debate which the House is considering about our future relationship.”

The rhetoric didn’t translate into needed votes, and the failure to do so is already triggering repercussions. Most alarming to many is that, in reaction, the European Council—for the first time—has publicly conceded that a “no-deal” split is a likely scenario.

EC President Donald Tusk called a summit for April 10. “The Commission regrets the negative vote in the House of Commons today. As per the European Council (Article 50) decision on 22 March, the period provided for in Article 50(3) is extended to 12 April,” the EC said in a statement. “It will be for the U.K. to indicate the way forward before that date, for consideration by the European Council. A ‘no-deal’ scenario on 12 April is now a likely scenario.”

“The EU has been preparing for this since December 2017 and is now fully prepared for a ‘no-deal’ scenario at midnight on 12 April,” it added. “The EU will remain united. The benefits of the Withdrawal Agreement, including a transition period, will in no circumstances be replicated in a ‘no-deal’ scenario. Sectoral mini-deals are not an option.”

What would happen if there is a “no-deal” Brexit? Prognostications range from confusion and aggravation, to a dystopian transition period. The British economy is likely, in the eyes of economists, to take a beating. Food and medicine shortages are also a likely side effect. U.K. airlines, chemical companies, pharmaceutical manufacturers, transport firms, and others have already been warned by the European Union that, in a “no-deal” scenario, they will need new EU licenses and approvals if they want to make or sell products cross-border. A “no-deal” split would also likely create a “hard border” between Northern Ireland, still part of the United Kingdom, and the Irish Republic, which will remain in the European Union post-Brexit.

There is also the unsettling, already-in-motion prospect of Operation Redfold. Under that strategic plan and worst-case scenario, the British Ministry of Defense has ordered 3,500 soldiers to be on standby. Operations would be centralized at a command center housed in an underground nuclear bunker.

Complicating an already over-complicated process is the failure of MPs to agree on an alternative to May’s plan. On Monday, they will try once again to build consensus from eight other plans for executing their European divorce.