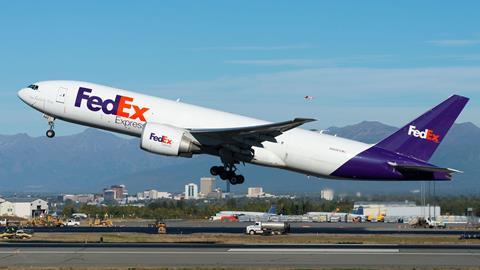 In 2008, when FedEx Corp. published its first Global Citizenship Report, its greenhouse gas (GHG) emissions were already top of mind.

“As a leader in the transportation industry and in the aviation sector, we realize that we must rethink our approach to fuel consumption and have been working in this regard for some years,” the report said. “Reducing our reliance on fossil fuels is not just a matter of environmental sustainability but of economic necessity.”

In that first report, FedEx set a goal of reducing its aircraft emissions intensity by 20 percent by 2020, based on an FY2005 baseline. The company implemented a strategy of upgrading its fleet with more efficient aircraft and, through its Fuel Sense program, sought to maximize fuel efficiency by less idling of airplanes on the ground, putting aircrafts on idle during portions of descent, and converting ground support equipment from gas-powered to electric.

FedEx didn’t want to “fall in the trap of simply reporting, without knowing why we were reporting and what we were trying to achieve.”

In 2009, FedEx reported its Scope 1, Scope 2 (indirect produced by purchased energy), and Scope 3 (supply chain/vendors) emissions for the first time in its Global Citizenship Report.

These are the same GHG emissions U.S. public companies would be mandated to report, starting in FY2023, if a rule proposed in March by the Securities and Exchange Commission (SEC) is approved.

Mitch Jackson, FedEx’s staff vice president, environmental affairs and chief sustainability officer, said the company’s strategy on environmental, social, and governance (ESG), specifically its desire to reduce GHG emissions, drove its decision to report its progress and track the goals it set for itself.

“From the start, what we were trying to do was articulate our strategy and our approach to sustainability,” he said.

Jackson said FedEx didn’t want to “fall in the trap of simply reporting, without knowing why we were reporting and what we were trying to achieve.”

Almost from the beginning of its GHG emission reduction efforts, FedEx has struggled to strike a balance between achieving year-over-year decreases in total emissions while the company kept growing.

After several years of a steady decline in GHG emissions from 2007-10, FedEx’s Scope 1 emissions increased slightly in FY2011 by just under 5 percent. Total emissions (Scopes 1, 2, and 3) were up 4 percent. In its 2011 Global Citizenship Report, the company attributed the spike to “increased shipping volumes, which came with improved global economic conditions and strong demand for our services.” Total daily package volumes went up 5 percent, freight truckloads up 4.5 percent, and revenue up 13 percent.

A 4 percent increase in GHG emissions was seen by the company as a vindication of sorts—that its reduction strategies were working despite its growth. So confident was FedEx in the implementation of its strategy that in 2012 it reset its 20 percent reduction in aircraft emissions intensity goal by 2020 to 30 percent. The company was at 18 percent at the time. It would eventually fall short of this enhanced goal, hitting only a 27 percent reduction by FY2020.

Other goals added or enhanced in 2012 included:

FedEx established sustainability impact teams that included each of its operating companies, in order to create a pathway for sustainability ideas to flow up to management.

In FY2012, GHG emissions jumped slightly, up 0.6 percent over FY2011. But revenues were up 9 percent, “continuing our trend of decoupling economic growth from our direct and indirect carbon emissions,” the 2012 report said.

GHG emissions in FY2013 were down slightly despite increased revenue, and the company moved closer to achieving its goals to reduce aircraft emissions intensity (down 22.3 percent since 2005) and increase fuel efficiency of FedEx Express vehicles (27 percent). It had not made any progress on obtaining alternative jet fuels and was transparent about it.

Revenue would go up, as would total GHG emissions. But the increase in emissions was not keeping pace with the revenue increases. More revenue meant more flights and more trips, but FedEx’s environmental initiatives were bearing fruit.

“Team members from FedEx are involved in international efforts to test, research, and advocate for sustainable alternative fuels, moving us closer to being able to use alternative fuels for aviation in the near future,” the 2013 report said.

A trend developed over the next several years. Revenue would go up, as would total GHG emissions. But the increase in emissions was not keeping pace with the revenue increases. More revenue meant more flights and more trips, but FedEx’s environmental initiatives were bearing fruit.

By 2017, FedEx had remained stuck at 22 percent on its goal of 30 percent reduction in aircraft emissions intensity and was no closer to finding alternative jet fuel.

“The first delivery of commercially viable and available alternative fuels is anticipated in 2019,” the company stated its 2017 report. Alternative fuel would not be delivered until 2021.

Instead of focusing on its bottom-line GHG emissions, as were always disclosed, FedEx began highlighting something called “total emissions intensity,” which was a calculation of total metric tons of GHG emissions divided by total revenue. By this metric, FedEx could show improvement in its GHG emissions strategy even as revenue continued to increase.

For example, in FY2018, GHG emissions rose 7 percent to more than 19 million metric tons, the most the company’s operations had ever produced up to that point. But FedEx would show on the next line its total emissions intensity was down, albeit slightly. It does logically make sense that if your company delivers more packages in one year than another, its GHG emissions would go up as well. FedEx was saying it had kept those emissions from rising at the same rate of its revenue.

But if investors, regulators, employees, and the public stayed focused on the company’s total GHG emissions, which were clearly rising, FedEx was falling short.

In FY2020, despite another year with increased revenue, FedEx’s total GHG emissions were down slightly compared to the year before. According to its 2021 ESG Report, the company used less diesel fuel, less gasoline, and less natural gas in its facilities, and more of the energy it purchased came from cleaner sources.

But FY2021 saw the company’s overall GHG emissions spike by more than 10 percent. FedEx has managed to prevent GHG emissions from increasing at the same pace as its revenue growth but has not managed to rein them in.

In March 2021, FedEx attempted to reverse this trend by setting a goal to achieve carbon-neutral operations by 2040. The company said it would reach the goal by investing in three areas: vehicle electrification, sustainable energy, and carbon sequestration.

In 2022, FedEx released an update on its progress toward this goal. In addition to adding a handful of electric delivery trucks, the company also issued a 600 million euro (U.S. $632 million) sustainability bond tranche in Europe, the first by a North American transportation and logistics company and “one of the ways we will fund our efforts toward our goal of carbon neutral operations,” the release said.

While FedEx, like all public companies, is still analyzing the SEC’s proposed climate-related disclosure rule, it has tracked and reported its GHG emissions for years.

“I think the reporting and the proactive approach we’ve taken have been in anticipation of that. We were there before it was being proposed by the federal government,” Jackson said.