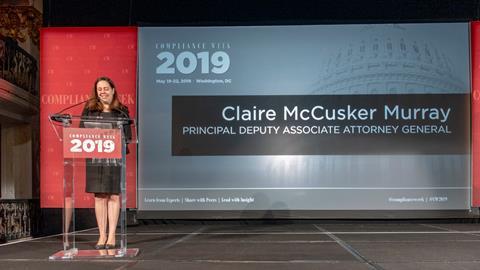 The change in policy that newly appointed Principal Deputy Associate Attorney General Claire McCusker Murray presaged in her keynote speech at Compliance Week’s annual conference acknowledges the importance of an effective compliance program, especially when it comes to antitrust investigations.

Murray said that under the current leniency program, only a “company that first reports its involvement in an illegal cartel can qualify for a complete pass from criminal prosecution in exchange for cooperation in the Antitrust Division’s investigation.” In other words, the only way to avoid criminal prosecution is to be the first co-conspirator to report your crimes to and then cooperate with the Antitrust Division. Currently, all other co-conspirators could be expected to be criminally charged and prosecuted to the full extent of the law.

Murray said the Antitrust Division is “looking to do more to reward and incentivize good corporate citizenship.” She acknowledged that even with the best compliance program, employees can engage in violations of law. The Justice Department wants to “credit robust compliance programs at the charging stage, even when efforts to deter and detect misconduct were not fully successful in this particular instance.”

This change in the leniency program could potentially open up a new and important avenue for companies to seek credit under the program.

“Companies that invest in the implementation of an effective ethics and compliance program will earn the assurance of significant credit under the leniency program,” explained Mike Volkov, founder and CEO at the Volkov Law Group, which specializes in corporate compliance and internal investigations. “Under the new regime, a second (or later) company with an effective compliance program may earn the same (or even better) benefits as a company that reports potential misconduct earlier in the race to the Justice Department.”

How would a company work toward, as Murray said, being a “good corporate citizen with a comprehensive compliance program”? Jesse Caplan, a former trial attorney in the Antitrust Division and now managing director at Affiliated Monitors Inc., said that a corporate compliance program should include an antitrust component to be deemed “comprehensive” for purposes of getting credit from the Antitrust Division.

He cautioned there are differences between anti-corruption compliance programs, AML compliance programs, and other types of compliance programs a corporate compliance practitioner may be familiar with. For example: “A company’s sales staff and management will often find themselves in situations where they are meeting with and talking to their competitors—like industry association meetings and conferences. The dos and don’ts of what can be discussed, and what to do when certain topics come up, have to be clearly articulated throughout the company, regularly repeated, and ideally audited. Individuals who interact with the company’s consumers or competitors have to understand and appreciate the significant implications of their conduct,” Caplan said.

“The objective is for the company to be able to credibly demonstrate that illegal conduct involved rogue actors, that it was not indicative of the culture of the organization, and may have occurred in spite of a comprehensive and effective compliance program, as opposed to the lack of such a program,” Caplan said.

This major change to the Corporate Leniency Policy is a clear recognition by the DOJ that more robust compliance programs are the best front-lines defenses to prevent, find, and fix illegal conduct, whether that be the payment of a bribe, engaging in price-fixing, or money laundering.

Tom FoxThomas Fox has practiced law in Houston for 30 years. He is now an independent consultant, assisting companies with FCPA and compliance issues.