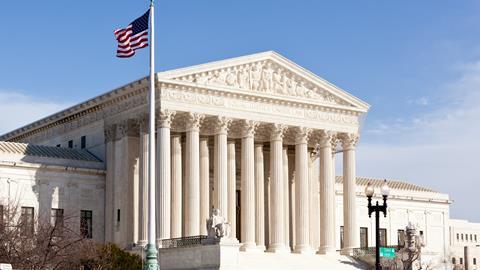 The U.S. Supreme Court will hear arguments this week in cases that question whether the current structure of the Consumer Financial Protection Bureau (CFPB) is constitutional, and whether to curb the Securities and Exchange Commission’s power to return funds to fleeced investors.

In Seila Law v. Consumer Financial Protection Bureau, Seila Law will argue before SCOTUS on Tuesday that the agency’s structure is unconstitutional. Seila argues that because the agency’s director cannot be fired by the president at will, it violates Article II of the Constitution, which deals with executive powers.

The Dodd-Frank Act, which established the CFPB in 2010, says the director, once confirmed, can only be fired due to “inefficiency, neglect of duty, or malfeasance in office.” Directors serve five-year terms. Seila Law, which is being investigated by the CFPB for violating telemarketing rules, argues that the court should nullify the agency’s demand for information in connection with the investigation.

The case took an interesting turn in September 2019 when the CFPB itself, in a brief filed with the court, agreed with Seila Law that the agency’s structure is unconstitutional. The U.S. Department of Justice had previously indicated the president should have the authority to fire the CFPB director for any reason. The CFPB is one of a number of federal agencies that have drawn the ire of President Donald Trump.

The Consumer Financial Protection Bureau, or CFPB, has been a total disaster as run by the previous Administrations pick. Financial Institutions have been devastated and unable to properly serve the public. We will bring it back to life!

Whatever SCOTUS decides on the constitutionality of its structure, the CFPB argues the agency itself should continue to exist. “It is the federal government’s only agency solely dedicated to consumer financial protection,” the CFPB argued in its brief. Striking down the entire statute creating the CFPB, rather than just the removal restriction, “would be severely disruptive,” the agency said. The agency also has taken no steps to close its investigation into Seila Law.

Paul Clement, a former U.S. solicitor general, has been assigned by SCOTUS to defend a lower court’s ruling and the CFPB’s structure. He says the lawsuit has “almost nothing to do with the actual dispute” between Seila Law and the CFPB, which arises simply from “an effort by the CFPB to enforce a garden-variety civil investigative demand.” He encourages SCOTUS to wait for a case in which the removal of the director is actually being challenged.

Others, like the Project on Government Oversight (POGO), say the court should uphold the limits on the president’s ability to fire the CFPB director at will.

“Even in its weakest interpretation, petitioner’s arguments would render unconstitutional critical elements of the federal government, including the Social Security Administration, the Office of Special Counsel and the Federal Housing Finance Agency,” POGO said in an amicus brief. It would also “fly against” the court’s own precedent and Congress’ historic power to determine how the President carries out its will.

And several Congressmen weighed in, arguing in a brief that the court should issue a narrow ruling that resolves the dispute between the two parties, while leaving the broader questions on the CFPB’s structure to be resolved by Congress.

A decision is expected in late June, according to Scotusblog.

In Liu v. Securities and Exchange Commission, SCOTUS will hear arguments Tuesday about whether the SEC can seek disgorgements—profits gained from an unlawful activity—as part of its enforcement actions.

The SEC fined Charles Liu and Xin Wang $8.2 million for a scheme that solicited funds from foreign nationals seeking to qualify for immigrant visas. The couple said it planned to invest the money in a California cancer treatment center—part of a government-backed plan that exchanged visas for wealthy foreigners in exchange for investment into U.S. businesses—but spent much of the money on other things. At issue is whether the SEC can force the couple to return $26 million—the disgorgement—back to defrauded investors.

The decision could considerably weaken the SEC’s enforcement powers, if SCOTUS decides that disgorgement is not an allowed legal remedy under the Securities Act of 1933 and the Securities Exchange Act of 1934.

Liu’s argument relies heavily on the Supreme Court’s 2017 decision in Kokesh v. SEC, which set a statute of limitations of five years for the SEC to recover money for investors. That decision was seen as a blow to the SEC’s enforcement power, because several of its largest enforcement actions reach back much farther in time.

The Kokesh case may indeed contain a glimpse into the court’s opinion on the matter.

In the unanimous Kokesh opinion, Justice Sonia Sotomayor wrote: “SEC disgorgement thus bears all the hallmarks of a penalty: It is imposed as a consequence of violating a public law and it is intended to deter, not to compensate.”