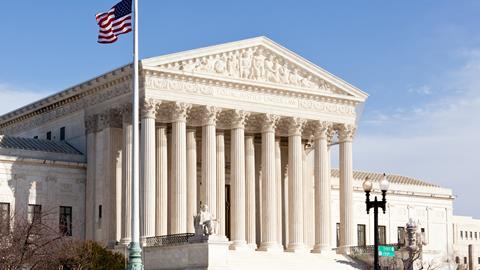 The U.S. Supreme Court on Monday in a long-awaited decision reaffirmed the Securities and Exchange Commission’s authority to recoup profits obtained from fraudulent schemes but limited the scope of what can be sought through disgorgement.

To punish securities fraud, the SEC is authorized to seek “equitable relief” in civil proceedings. The question posed to the Supreme Court in the case Liu v. SEC was whether disgorgement is considered equitable relief. In its decision, the majority held that a “disgorgement award that does not exceed a wrongdoer’s net profits, and is awarded for victims, is equitable relief.”

The Supreme Court noted in its 8-1 decision that any disgorgement order should be to return funds to harmed investors but allowed that in certain instances it may not be feasible to do so. “Section 78u(d)(5) provides limited guidance as to whether the practice of depositing a defendant’s gains with the Treasury satisfies its command that any remedy be ‘appropriate or necessary for the benefit of investors,’ and the equitable nature of the profits remedy generally requires the SEC to return a defendant’s gains to wronged investors,” Justice Sonia Sotomayor wrote in delivering the opinion of the Court.

“The parties, however, do not identify a specific order in this case directing any proceeds to the Treasury,” Sotomayor wrote. “If one is entered on remand, the lower courts may evaluate in the first instance whether that order would be for the benefit of investors and consistent with equitable principles.”

Second, the Supreme Court ruled that joint and several liability is generally not appropriate in disgorgement cases, unless the wrongdoers were partners. The Supreme Court also made clear that “courts must deduct legitimate expenses before awarding disgorgement under §78u(d)(5).”

In this case, the district court did not ascertain whether any of the expenses were legitimate, the Supreme Court noted. “On remand, the lower courts should examine whether including such expenses in a profits-based remedy is consistent with the equitable principles underlying §78u(d)(5),” Sotomayor wrote.

“The fact that this was an 8-1 opinion reaffirms the centrality of the disgorgement remedy to the SEC’s enforcement program,” says Howard Fischer, a partner with law firm Moses & Singer. “But in confirming that any disgorgement must allow a defendant to deduct expenses and only allow ‘net profits’ after deducting for ‘legitimate expenses’ will provide defendants strong ammunition for battling back against the SEC’s tendency to seek aggressive disgorgement remedies.”

“This decision preserves the SEC’s disgorgement power, while at the same time conferring on defendants a valuable tool for limiting it,” Fischer adds. “Moreover, the decision contains additional limits on joint liability where there are multiple defendants that may ultimately provide defendants yet another argument for lowering disgorgement amounts awarded by courts.”

Justice Clarence Thomas is the only one who dissented. “The Court correctly declines to affirm the Ninth Circuit’s decision upholding the District Court’s disgorgement order, but I disagree with the Court’s decision to vacate and remand for the lower courts to ‘limi[t]’ the disgorgement award,” Justice Thomas wrote in his dissent.

He added that disgorgement can “never” be awarded under 15 U. S. C. §78u(d)(5), because that statute authorizes the SEC to seek “only ‘equitable relief that may be appropriate or necessary for the benefit of investors,’ and disgorgement is not a traditional equitable remedy. Thus, I would reverse the judgment of the Court of Appeals.”

The case follows the Supreme Court’s unanimous June 2017 decision in Kokesh v. SEC, in which the Court held that disgorgement collected by the SEC is subject to the general five-year statute of limitations on monetary civil penalties. Trace Schmeltz, co-chair of Barnes & Thornburg’s Financial and Regulatory Litigation group, says the opinion in Liu “largely closes the can of worms” that was opened by a footnote included in Kokesh stating that the Supreme Court was not making a ruling in that decision as to whether disgorgement was an appropriate equitable remedy.

“The one potentially groundbreaking aspect of the case is that it opens the question of whether the SEC’s practice of depositing disgorged funds with the Treasury—rather than returning them to victims—is legitimate,” Schmeltz says. “We will have to wait for the lower court, on remand, to opine on that issue.”

Nancy Hendrickson, co-chair of financial services practice group at Kaufman Dolowich & Voluck, says she believes the decision “will significantly change the way courts calculate disgorgement” and that “from now on, the SEC will have to make some kind of showing as to the feasibility of returning funds to victims.”

“The SEC will also be limited in its ability to obtain relief from co-defendants who are not partners,” Hendrickson adds. “Hence, expect more defendants to adopt an ‘every man for himself’ defense strategy, claiming that they were merely passive recipients of the profits. This may curtail the SEC’s ability to obtain relief from so-called relief defendants.”

Expect more litigation, as well, over what constitutes legitimate business expenses that must be deducted from any order of disgorgement. “This is perhaps the most significant impact of this decision, because most courts do not currently base disgorgement orders on net profits,” Hendrickson says.

Jeffrey Boujoukos, a partner at law firm Morgan Lewis and leader of the firm’s securities enforcement practice, says “this decision is by no means a complete victory for the Commission. Many of the restrictions on disgorgement set forth in this decision will have a narrowing effect on the scope of this remedy and, because much of the execution is left to the lower courts, the SEC will be litigating these issues for years to come. The consequences for the Commission’s insider-trading prosecutions, which often seek disgorgement from tippers for the profits of downstream tippees and deposit disgorgement into the Treasury, may be particularly acute.”

The decision stems from an SEC lawsuit filed against Charles Liu and Xin Wang for soliciting foreign nationals to invest in the construction of a cancer-treatment center. It was revealed in an SEC investigation, however, that Liu and Wang misappropriated much of the funds for their personal use.

This discovery prompted the SEC to file a civil action in the U.S. District Court for the Central District of California against Liu and Wang in which the agency sought disgorgement equal to the full amount Liu and Wang had raised from investors—the sticking point of the U.S. Supreme Court case. Liu and Wang argued that the disgorgement remedy failed to account for their “legitimate” business expenses.

The district court disagreed, however, and ordered Liu and Wang to jointly and severally liable for the full amount. The 9th Circuit Court of Appeals affirmed, ruling that it would be unfair to allow defendants to offset business expenses where the business was created to defraud investors in the first place.