In delivering a keynote address at an industry event Monday, Elizabeth Rosenberg posed the question: “What must a culture of compliance look like in a world where autocracy is on the rise?” 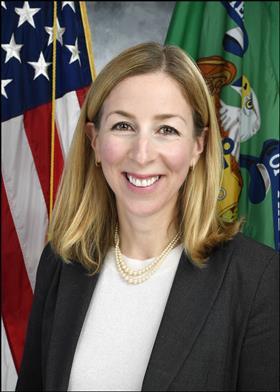 The assistant secretary for terrorist financing and financial crimes at the Department of the Treasury made the remark during her speech at the Association of Certified Anti-Money Laundering Specialists’ (ACAMS) Hollywood Conference. The address was delivered as the United States and the rest of the world grapples with Russia’s invasion of Ukraine, which has prompted significant reaction from the West in the form of crippling sanctions and restrictions on Russian imports and exports.

With these actions have come increased responsibilities for compliance officers, particularly those working at financial institutions.

“History has thrust the compliance sector into the center of events. Things are changing quickly, and they’ve never been more important at any point since 9/11,” Rosenberg said. “The question I want to address today is: How must you adapt your work to meet the moment?”

To this point, Rosenberg offered three key areas of focus for compliance officers, the first being risk management and related considerations. She noted Bank Secrecy Act and anti-money laundering (BSA/AML) compliance programs cannot be managed passively, with the moment instead calling for enhanced due diligence and swift reactions to changes on a near-daily basis.

“Things used to happen more linearly: Treasury would release sanctions, you’d take time to review and understand them, and then adjust your compliance efforts accordingly,” Rosenberg remarked. “We don’t have the luxury of that leisure anymore. Everything is happening in real-time, simultaneously, and we must move quickly in order to block those that fund and support Russia’s war against Ukraine.”

Second, Rosenberg called for public and private entities to equally embrace information sharing—across borders, between financial institutions, and with the government—as part of a united effort to ensure restrictions against Russia are being enforced. She lauded the recent launch of the Russian Elites, Proxies, and Oligarchs (REPO) task force as an example of how multiple countries are working together to “put the full picture together.”

“The Russian elite are extremely adept at hiding their wealth,” she said. “Our compliance efforts couldn’t be up against a tougher adversary, and we will not find their assets if the financial intelligence remains fractured—with some data at Treasury, other data in your compliance offices. We need all the puzzle pieces.”

“Things used to happen more linearly: Treasury would release sanctions, you’d take time to review and understand them, and then adjust your compliance efforts accordingly. We don’t have the luxury of that leisure anymore. Everything is happening in real-time, simultaneously, and we must move quickly in order to block those that fund and support Russia’s war against Ukraine.”

Third, Rosenberg acknowledged the importance of ongoing efforts to close loopholes in the U.S. financial system. The Financial Crimes Enforcement Network’s beneficial ownership registry is one piece, she said, along with potential new rules for real estate disclosures. And she further mentioned her concerns regarding abuse of citizenship-by-investment programs, citing the actions of alleged 1MDB fraudster Jho Low as an example of how the current process can be gamed.

Rosenberg concluded her speech with a call to action, noting “not everyone works a job that gives them the chance to effect the course of history.” Compliance is currently in that position, she said.

“The fate of Ukrainian democracy and the strength of democracies to push back against autocracy writ large depends on whether we do our jobs—and whether you do AML and Russian sanctions compliance work well,” Rosenberg said.