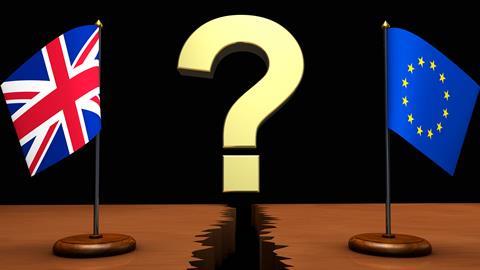 Preparers are facing some brutal accounting judgments as they approach the end of a reporting period straddling key dates in a chaotic exit by the United Kingdom from the European Union.

For calendar-year companies, the March 31 close of the first quarter is only days away, falling just a few days ahead of Parliament’s April 12 extended deadline for Brexit. For the sake of numerous financial statement assertions, preparers are required to exercise judgments about their business and economic conditions as of their period close dates, or March 31.

“I don’t envy CFOs and chief accounting officers who are sitting there saying, ‘What do I think is going to play out with a particular part of the business?’ ” says Todd Rahn, senior managing director at FTI Consulting. “This is such an important underlying issue, and with such a rapid change of events. It does make it difficult.”

A recent PwC podcast called out what it considered to be the five most critical accounting areas affected by Brexit. They include, for example, analyses for impairment of assets, including financial assets, intangible assets, goodwill, and business segments.

Brexit would certainly qualify as a triggering event under accounting rules, compelling a company to reconsider the potential for goodwill impairments separate from routine annual testing. To the extent companies have operations or supply chains that fall within U.K. borders, the implications of Brexit can be substantial and highly uncertain based on the current state of affairs.

Potential impacts to financial assets, like valuations and hedging strategies, also must be considered, PwC points out. Many financial assets are measured at fair value, which is generally defined as the price a buyer would pay in an orderly, arm’s length transaction. Fair-value measurements take in plenty of market information, which would be heavily affected by whatever Brexit scenario ultimately plays out.

On the asset side of the balance sheet, companies with any ties to the United Kingdom, even if only through investment holdings, need to give consideration to Brexit as they discern the judgments necessary to arrive at accounting conclusions. “Frankly, you’re looking at valuations of any investments the company holds,” says Rahn.

To the extent companies might be making or considering changes to how their business is organized or where their assets are located, restructuring activity also must be considered in accounting, PwC says. Such accounting occurs only when changes are made, not under consideration, so companies that are awaiting a more certain path forward may not face those accounting issues on March 31. Disclosure might be an issue, however, if they’re planning or considering changes.

Accounting for taxes is another issue companies face with respect to Brexit. Should authorities miraculously arrive at a withdrawal agreement or establish any new trade agreements, that can result in changes in tax law that must be reflected in financial statements. U.S. GAAP requires companies to reflect changes in tax law in the period they are enacted, so a deal by the end of the quarter would produce considerable scrambling in tax accounting departments.

Disclosure is also a key area, in PwC’s view. Jay Clayton, chairman of the Securities and Exchange Commission, as well as SEC staff, said in late 2018 they believed companies were generally underestimating the potential effects of Brexit. They called on companies to give Brexit more careful consideration and disclose with greater specificity how Brexit might affect their operations and their financial positions.

Rahn points out companies have much to consider as well with respect to liabilities. Working capital, debt covenants, and long-term asset positions could all be affected by Brexit, and all need to be considered in arriving at financial statement assertions each reporting period.

“I don’t envy CFOs and chief accounting officers who are sitting there saying, ‘What do I think is going to play out with a particular part of the business?’ This is such an important underlying issue, and with such a rapid change of events. It does make it difficult.”

Companies could find themselves layering on even more judgments if a significant path forward for Brexit is determined after their financial statement periods close on March 31, but before they are required to file their financial statements. In accounting parlance, an event occurring between those two dates that has a significant effect on a company is called a “subsequent event.”

GAAP requires companies to consider subsequent events as they determine what to report in financial statements. Some events are expected to be recognized even after the reporting date; some are not recognized but must be disclosed.

The analysis is not new to preparers, as the scenario can arise when litigation is resolved or a business acquisition is completed shortly after a reporting date, says Rahn. “There are decisions and judgments you have to make,” he says. “You may see differences in approaches and opinions, depending on each company’s fact pattern.”

The goodwill impairment analysis also offers another wrinkle with a new testing method coming online this year and next year. Companies are required to adopt a simpler method for testing goodwill for impairment beginning in 2010, but they are allowed to adopt the standard sooner.

Brexit is definitely an uncertainty that makes the goodwill impairment analysis tricky, says Carla Nunes, managing director at advisory firm Duff & Phelps, but most companies have any exposure in the United Kingdom mingled into broader business units or product categories. “So the result there is a little bit of cushioning,” she says.

Perhaps more important to the goodwill impairment analysis, Nunes says, is the state of the European economy. “Europe is suffering more from an economic slowdown in general,” she says. “China is importing fewer luxury cars from Germany. That may have a bigger impact.”

Duff & Phelps closely tracks goodwill reporting, and its U.K. results suggest impairments have see-sawed the past few years, says Mike Weaver, managing director at Duff & Phelps in the United Kingdom. Impairments jumped in 2016 in response to the public vote on Brexit, then leveled off in 2017.

Analysis of the earliest filings of 2018 results suggests goodwill impairments will rise again, says Weaver. “It is up significantly,” he said. He acknowledges, however, companies are struggling with the accounting judgments in the current uncertainty surrounding Brexit. “The way to test this is to look at what acquired businesses are likely to do going forward in terms of their results,” he says. “That is very tricky when you have effectively all deals on the table.”

Whatever the results: “Be very open about what’s happening in the company,” he says.