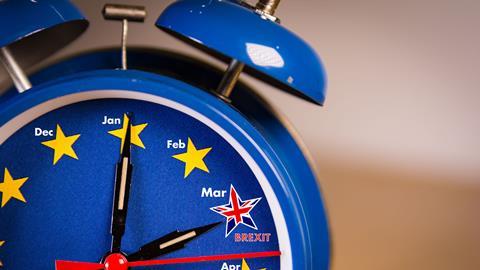 The United Kingdom’s Parliament has voted overwhelmingly to delay the country’s exit from the European Union in another defeat for beleaguered Prime Minister Theresa May.

Following consecutive votes over the two previous days to dump May’s Brexit deal agreed with the European Union and to take “no deal” off the table at all costs, Members of Parliament voted 412-202 Thursday to ask the European Union for a delay.

The United Kingdom is still officially due—and legally bound—to leave the European Union in 15 days on 29 March, unless all 27 EU member states and the European Commission agree to an extension.

Indications are that Brussels will agree to change the deadline, but the key questions are for how long, and under what circumstances?

President of the European Commission Jean-Claude Juncker has always said the negotiations should be concluded so they do not interfere with European Parliamentary elections that take place at the end of May. British MPs have said Brexit can be delayed until 30 June, which may lead to the awkward—and bizarre—circumstance of the United Kingdom taking part in European elections despite knowing that it is leaving the European Union.

EU leaders are quite circumspect about offering a time extension, saying the deadline should only be moved back if MPs agree to form cross-party consensus and agree to the deal that is currently on offer—and which so far the House of Commons has rejected twice. A third “meaningful vote” on the same deal (albeit with potential clarifications) is set for next week. That could also be set for defeat, which fuels EU fears that an extension is pointless.

It is not difficult to understand the EU’s reluctance to extend negotiations or to offer a different deal. As part of Thursday’s Parliamentary proceedings, MPs also rejected an attempt to secure another Brexit referendum by 334 votes to 85, and they also rejected a cross-party plan to allow MPs to take control of the Brexit process to hold a series of votes on the next steps—by the narrow margin of just two votes.

Michel Barnier, the EU’s chief Brexit negotiator, has said that “this [withdrawal] treaty that we negotiated with Theresa May’s government over the past year and a half remains the only treaty available.”

French President Emmanuel Macron has said Britain would need to come up with a clear reason for requesting an extension to the 29 March Brexit deadline, adding extra time could not be used to renegotiate the withdrawal. “The withdrawal agreement is not negotiable,” he said.

Germany’s Angela Merkel is also not keen to let the process dwindle on much further, especially if MPs cannot reach agreement, with the main point of contention being the Northern Ireland “backstop” proposal which would keep that part of the United Kingdom in the customs union in exchange for no hard border between it and the Republic of Ireland.

However, the President of the European Council, Donald Tusk, tweeted Thursday morning ahead of the vote that he would appeal to the rest of the 27 EU member states “to be open to a long extension if the United Kingdom finds it necessary to rethink its Brexit strategy and build consensus around it.”