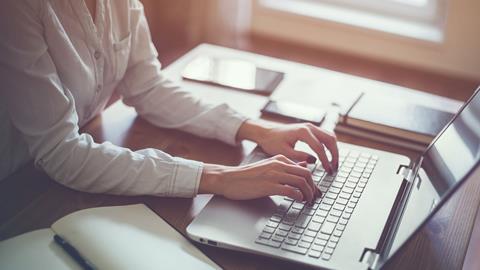 NAVEX Global’s 2019 Ethics & Compliance Hotline Benchmark Report is out, providing ethics and compliance officers a comprehensive look at how the performance of their hotline and incident management systems stack up against their peers.

This year’s benchmark report took from 2,738 companies who received 10 or more reports during 2018 and was based on an overall analysis that, for the first time, exceeded over one million individual reports in a single year.

To get a complete picture of your risks, it’s important to track all reports in a centralized incident-management system, said Scott Nelson, a partner at Seyfarth Shaw. Doing so will better help uncover weak points—problem regions, problem spots, problem managers, and what additional training is needed—Nelson said in a Webinar discussing the report’s findings.

“I can’t tell you how many companies I’ve represented where they’ve had a complaint but it’s incomplete, and they need to follow up, but they can’t get any more information to do a proper investigation because they have no way of getting in touch with the person.”

Even as tech-savvy generations enter the workforce, they are still opting for human interaction when it comes to reporting concerns, said Carrie Penman, chief compliance officer of advisory services for NAVEX Global. “It’s an important indication that there should be multiple ways for employees to report so that they can do it in a way they’re most comfortable,” she said.

On a related note, Penman and Nelson cautioned against giving employees the ability to bypass management and have a direct line of reporting to the board to report concerns. “First and foremost, it’s much better to have a strong and formal escalation policy in place,” Penman said. From there you can decide, as part of that escalation policy, what issues should be reported to the board.

To give employees a line of reporting directly to the board indicates “a lack of trust” in the management team or compliance officer, Penman added. If that’s the case, they should look at the team they have in place, rather than put in systems that bypass management, she said.

Another notable finding to come from the report: Inquiries dropped to an all-time low, making up 15 percent of all reports. Inquiries differ from allegations in that allegations are claims or concerns that may require further investigation, whereas employees may make an inquiry if they simply need advice or assistance, not just to report an issue.

“Both types of reports provide insight into your program,” NAVEX Global noted in the report. “Tracking these questions closely, regardless of intake channel, can provide valuable insight into areas where more training may be needed, policies should be updated, or procedures could be reviewed.”

Ethics and compliance officers should encourage employees to see the hotline as more than just a channel for reporting allegations. That, however, requires designating and training someone to understand the difference between inquiries and allegations, “so that complaints versus questions can be identified and things can be addressed in the proper way,” Nelson said.

During NAVEX Global’s Webinar, Penman and Nelson cited a recent study by George Washington University, “Evidence on the Use and Efficacy of Internal Whistleblowing Systems,” which uncovered a strong correlation between increased reporting volumes and returns on investment, including an increased return on assets and fewer instances of litigation. “That’s been a missing link for companies,” Nelson said.

By viewing internal reporting systems as a strategic advantage rather than a requirement, ethics and compliance departments “will have more opportunity to address issues quickly and before they are reported externally,” NAVEX Global said. Compliance officers need ammunition to take to senior management to get the necessary budgets. “That study certainly will be helpful in that regard,” Nelson said.

Just as important as it is for employees to come forward with questions or concerns, it’s equally important that they follow up on anonymous reports, which is when the reporter returns to a submitted case for follow-up or to provide additional information, for example. The median level of reports for which this occurred fell from 32 percent in 2017 to 20 percent in 2018, according to NAVEX Global.

“I can’t tell you how many companies I’ve represented where they’ve had a complaint but it’s incomplete, and they need to follow up, but they can’t get any more information to do a proper investigation because they have no way of getting in touch with the person,” Nelson said. “So, having the ability to follow up is really important.”

On a practical level, this finding highlights a key opportunity for ethics and compliance officers “to assess their processes for educating employees on the capabilities of their reporting programs, especially follow-up options for reporters that don’t compromise their anonymity,” NAVEX Global said in the report.

The categories of reports remain consistent with previous years’ findings, with the highest numbers concerning matters of “HR, diversity, and workplace respect,” making up 70 percent of all reports. This category entails employee relations or misconduct, including discrimination, harassment, and retaliation. “That means we need to continue, if we are in compliance, to have a really strong partnership with our HR teams to best manage these reports,” Penman said.

How does your report volume compare to others?

Utilizing the “Report Volume per 100 Employees” benchmark enables organizations of all sizes to compare their total number of unique contacts from all reporting channels—including Web forms, hotline, open door, mobile, e-mail, mail, and more. To calculate, take the total number of unique contacts (incident reports, allegations, and inquiries) from all reporting channels received during the period, divide that number by the number of employees in your organization, and multiply it by 100. 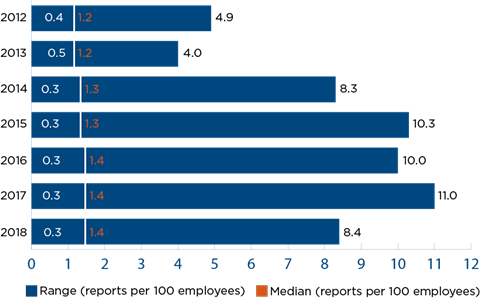 In the wake of the #MeToo Movement, which started in late 2017, NAVEX Global this year separately analyzed the median volume of harassment and discrimination reports for 2016, 2017, and 2018. What it found was that between 2016 and 2018, reports of harassment increased by a substantial 18 percent, with 41 percent of these reports substantiated. From 2017 and 2018 alone, there was an 8.5 percent increase in these reports.

These numbers are consistent with data published in October 2018 by the Equal Employment Opportunity Commission, showing that charges filed with the EEOC alleging sexual harassment in fiscal year 2018 increased more than 12 percent from the previous year. “These findings reflect strong growth in the number of employees willing to speak out against harassment,” Penman said. “And they should serve as notice to employers that #MeToo is a fundamental shift in employees’ willingness to tolerate harassment.”

“I don’t think people fully understand or appreciate what a big deal it is from an employment law standpoint,” Nelson said. “I think this movement is here to stay.”

Following HR, diversity, and workplace respect matters, the category with the second highest number of reports concerned “business integrity” issues, making up a median of 16 percent of reports. Other reports made, though to a much lesser extent, were environmental, health, and safety (6 percent); misuse/misappropriation of corporate assets (5 percent); and accounting/auditing/financial reporting (2 percent).

“Especially in a #MeToo era, this is way too long for complaints,” Nelson said. HR, diversity, and workplace respect matters need to be addressed and remedied quickly, and thus companies should strive to close those generally within two weeks, he said. “You don’t want sit on this information and wait 40 days.”

Some companies are even hiring dedicated investigators, serving either under the compliance function or HR. “I think that’s a great idea where you have people trained in investigations to help out with this,” Nelson said.

The broader message here for the ethics and compliance profession is that employee reports and inquiries that are tracked, documented, and followed up on help companies to better prevent, or more quickly detect and resolve, employee matters before they tarnish the company’s reputation and become a costly liability.