Elizabeth “Betsy” Duke and James Quigley remained unwavering about accepting any sort of accountability in their oversight roles as former board members of Wells Fargo and, instead, blamed the former management of the scandal-plagued megabank for a host of compliance and risk management failures during their testimony at a tense Congressional hearing Wednesday.

Both Duke and Quigley resigned this week after being cited by name in a scathing report published by the House Financial Services Committee majority staff that, in part, took shots at Wells Fargo’s board of directors for “appear[ing] reluctant” to engage in oversight of the bank’s efforts to comply with its 2016 sales practices consent orders. Duke and Quigley, specifically, were criticized in the report for their failed oversight of Wells Fargo’s compliance with five regulatory orders issued in response to the company’s widespread consumer abuses in the aftermath of the financial institution’s fake account scandal. 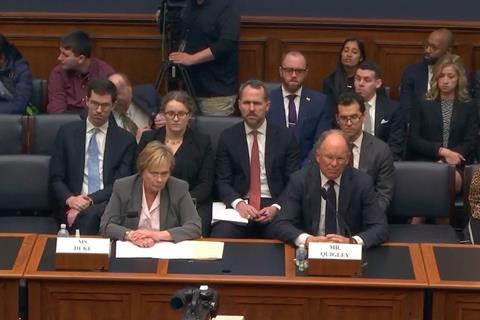 Elizabeth Duke and James Quigley were pummeled by questions during Wednesday’s hearing.

“Resignations do not absolve them of their failures,” Congresswoman Maxine Waters (D-Calif.), chairwoman of the committee, said in kicking off Wednesday’s hearing. “Directors of Wells Fargo and institutions across this country must understand that they are the last line of defense when it comes to protecting their company’s shareholders, employees, and customers.”

Rep. Patrick McHenry (R-N.C.), ranking member of the House Financial Services Committee, expressed similar sentiment: “I have deep concern about just the responsiveness of the board. It’s clear from the documents the majority and minority have that we have the same facts: There are severe deficiencies in management’s practices that were unique to Wells Fargo and unique failures of this board of directors.”

Waters further scolded Duke and Quigley for saying their decision to resign was to avoid “distraction” that could impede the bank’s future progress: “Let me be clear: This is not a distraction. We are examining misconduct and dereliction of duty.”

“I believe wholeheartedly that we both spent the time, used our judgement, did the inquiries, and did our job as thoroughly and as completely as we possibly could and made decisions in accordance with our best judgement about what was the best course of action for the company.”

Waters also stressed how the majority staff’s report “revealed attitudes and failures on the part of Duke and Quigley that are dismaying.” For example, Duke “gave the appearance of a see-no-evil mentality,” while Quigley “also didn’t appear to understand the gravity of his board responsibilities.”

A key point of contention throughout the congressional hearing focused on Duke and Quigley’s failure to acknowledge responsibility for the multitude of board failures cited in the majority staff’s report. “I believe wholeheartedly that we both spent the time, used our judgement, did the inquiries, and did our job as thoroughly and as completely as we possibly could and made decisions in accordance with our best judgement about what was the best course of action for the company,” Duke said.

In direct response to a question about whether they demonstrated a “dereliction of duty” as board chairs in dealing with the consent orders, Quigley laid blame on the clear lack of separation between management and the board. “At any time that those lines get blurred, I believe the enterprise becomes less safe and less sound and there’s less accountability,” he said. “I know what I’ve done as a board member of Wells Fargo, and I’m comfortable with that work and the way that I performed my role. I did my very best.”

When asked what structural changes the board has made to ensure it will receive complete and accurate information moving forward, Quigley responded that elimination of the federated model and strengthening the independent risk management group will create “higher quality information to the board to enable stronger and more effective oversight.”

Duke and Quigley also were challenged throughout the hearing as to why the board kept former CEO Tim Sloan as long as they did, even in the face of continued compliance failures. Neither gave a direct answer to this question and, in fact, avoided answering it every time.

Perhaps the harshest criticism came from Congressman David Scott (D-Ga.). “Something is rotten in the company,” he said. “You two have been on this board throughout the entire germination of this shameful attack on the trust and confidence of the American people in your bank. You allowed the bank’s management to repeatedly submit material that was deficient in response to the consent orders from our regulators.”

When Scott asked them why they didn’t hold management responsible and why they allowed Wells Fargo to give banking regulators “unacceptable reports,” the silence was deafening. “I hope and I pray that the people of this country see your stone silence when you won’t even answer this question,” Scott said.

The question also came about on numerous occasions whether Wells Fargo is too big to manage, to which Duke answered: “I don’t think it’s a function of size. I think it’s the way the company is organized and the way it has been reorganized historically.”

Quigley agreed. “I don’t think Wells Fargo is too large,” he said. “Wells Fargo needs to change its culture and that is underway under the new CEO that we have recruited.”

Beyond the hearing are broader lessons and warnings for all companies as it applies to corporate governance. In speaking about the standards to which board members must be held, McHenry commented, “Under the law, members of a corporate board of directors owe three fiduciary duties: the duty of care, the duty of loyalty, and the duty of good faith. Those concepts are not very complicated. Directors must be diligent; they must subordinate their personal interest beneath the interest of the company, and they have to act in the best interest of shareholders.”

Congresswoman Rashida Tlaib (D-Mich.) talked about “corporate greed” being a “disease” in our country. “I don’t like it when corporate America calls it a cultural issue. It’s a crime,” she said. “This [report] needs to be read by every single board of directors.” It’s not just about numbers, she said, it’s about every single human being that was impacted by these criminal schemes.