‘Crisis of Conscience’ explores culture crises, whistleblowers that uncovered them

When we think of whistleblowing in the context of our current newsfeed, it’s a term that has certainly impacted our political and social world, not just our compliance one. Thus, in sharing my review of “Crisis of Conscience: Whistleblowing in an Age of Fraud,” by Tom Mueller, I want to be mindful to keep my perspective to that which can bring value to our compliance programs and initiatives.

However, for those who are interested in the social, economic, political, and psychological implications of whistleblowing and speaking up, this work is a tour de force, and certainly the most comprehensive treatment of whistleblowing and whistleblowers to date. I’d like to thank the publisher and author for bringing this book to my attention and for the opportunity to review it for My Compliance Library.

“‘Crisis of Conscience’ describes several nuclear meltdowns of compliance: major organizations committing massive fraud, crime and human harm with malice aforethought. In each case, I identified specific practices that these firms used to blind countless perfectly good employees to the bad things they were doing—practices that only a handful of whistleblowers seemed able to see through,” Mueller said when asked to describe how the book can help compliance leaders and their programs. “Knowing and shunning these fraud-facilitation techniques and mindsets is vital to keeping a firm on a path of ethical, compliant, and sustainable business practices.” 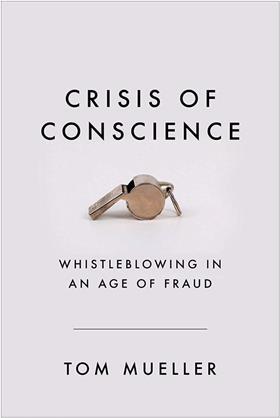 Mueller starts off his book by sharing the history of whistleblowing in the first chapter, “Becoming a Whistleblower,” bringing us back to the Civil War and qui tam mechanisms that “allowed common citizens to become private prosecutors” by initiating claims of financial abuse on behalf of the government. And it was post-Civil War, in response to government contracting fraud, when the False Claims Act was passed, penalizing contractors “for each misrepresentation or ‘false claim’ that they made in their request for payment of the government.” Combined with existing qui tam provisions, individuals could “prosecute fraud with or without the government’s participation.”

Fast forward to the 1980s, when some of us might remember the Department of Defense “being ridiculed for paying $640 for toilet seats on military planes.” The False Claims Act was amended, and “the revitalized law guaranteed whistleblowers between 15 and 30 percent of funds recovered in successful cases; wrongdoers in these cases were also required to pay the whistleblowers’ legal bills.” The amended law also increased the multiple the offender had to repay in terms of each false claim.

Mueller then takes us to the rise of whistleblowing, as well as to the character and role of the whistleblower. Viewed from a compliance perspective, this book provides great support in helping to examine the root causes of what motivates someone to speak up and turn to regulators when all else has failed, “which often arises from malevolent authority in organizational cultures tuned toxic.”

Mueller continues the whistleblowing chronology, post-Watergate, with the introduction of the Ethics in Government Act and the Inspector General Act, which “created a new, nominally independent office within 12 government agencies (since expanded to 73 government bodies) to investigate fraud, waste and abuse within their parent organization, and to shield whistleblowers who further these aims.” For those following current political events, including the cascade of Inspector General (IG) reports, and who might have wondered about the origins and remit of the IGs—mystery solved.

Chapter by chapter, the book brings us through a multitude of whistleblowing crucibles, from malfeasance in nuclear waste disposal to financial fraud. These chapters are deep with commentary on the nature and broader significance of whistleblowing, the whistleblower, and fraud epicenters. Reading them will certainly inspire deep thinking about social injustice, whistleblower retaliation, and the political will to fight financial fraud. Mueller coherently argues to truly address many of these challenges we need to rethink some of our political, legal, and economic ecosystems, specifically where conflicts of interest, and the frauds that are often their offspring, are built into those networks.

“In structural terms, avoid ‘compliance capture’ by ensuring the structural independence of your department. Avoid moral numbing by framing important choices as ethical decisions—opportunities to do the right thing—and not as simple business or legal decisions, which tend to degenerate into box-ticking exercises. And take a ‘broken windows’ approach to obeying policies, ethical guidelines, and laws: Every small infraction can begin a slippery slope descent into more serious wrongdoing.”

Those wider issues I will leave to the reader, but what I did appreciate was the use of behavioral research in the book. In the chapter “Blood Ivory Towers,” Mueller quotes some behavioral all-stars, including Jonathan Haidt and Daniel Kahneman, to help us understand why organizations, and their leaders, create a culture of willful blindness and other biases that “take place well below the waterline of the conscious.” One of my favorites is Mueller’s description of confirmation bias, where he quotes Kahneman to share how we can “remember and favor data that confirm our preexisting beliefs, while irrationally discounting alternative hypotheses that may be more valid.” Another one is “in-group favoritism,” which he describes as leading us “to prefer the members, beliefs and behaviors of our own group over those people we perceive to be outsiders.”

When I queried Mueller as to what behavioral science (besides being a fascinating field) has to do with whistleblowing and whistleblowers, he responded, “In part, it’s about sharing what decades of social and cognitive scientists have taught us about money, obedience, and loyalty. Namely, that money is a psychoactive substance, and financial incentives often turn perverse. That obedience to authority and loyalty to the team have facilitated some of history’s, and corporate America’s, worst crimes. And perhaps most vitally, that almost all humans have a strong aversion to causing harm to fellow humans—a taboo that can be overridden by euphemisms and abstractions (‘meeting sales targets’ instead of pushing opioids; ‘externalities’ instead of dumping arsenic in a river). When we understand these forces and biases by empowering employees to see past their daily work routines and the wider picture of their jobs, to question and be sensitive to where they may be causing (or witnessing) real harm, financial or physical, to people in the real world, we can hopefully avoid so many of the crucibles which have caused such harm.”

As such, “Crisis of Conscience” is a treatise on the “familiar collision of personal ethics and group loyalty.” One chapter, closer to our compliance field, is “The Money Dance,” which involved a whistleblower who worked in the compliance organization of a hospital, specifically involving Stark Law violations. It’s a chapter that not only addresses the specifics of the case, but also deals with the greater issue of medical care and how our healthcare system can impact patient care, services, and outcomes. Mueller does another great service of once again leaning on the work of behavioral science, sharing the work of Max Bazerman, who described how an organization “has an informal, hidden culture whose norms, signals, and pressures often influence employee behavior far more than its formal compliance and ethics program ever will.” Bazerman adds, “This hidden culture isn’t announced in official declarations, but is passed along informally among employees, teaching what the company really expects of them.” As Mueller well reminds us, “Bad behavior is caused less by bad morals than by the presence of authority, group conformity, and self-interest.” These forces come to life in “The Money Dance,” among the other chapters, and I think would make for great compliance workshops in terms of how to address and mitigate such forces.

But as I shared at the start, “Crisis of Conscience” is 500-plus pages of incredibly well-researched cases of whistleblowers, whistleblowing, and fraud, with a wide range of lessons and conclusions. Integrating them into our compliance world is a challenge, so I asked Mueller what he would counsel a compliance leader to do in order to spark a speak-up culture, as to avoid so many of the crucibles that I am sure were painful to write and sometimes painfully emotional to read:

“In structural terms, avoid ‘compliance capture’ by ensuring the structural independence of your department,” he answered. “Avoid moral numbing by framing important choices as ethical decisions—opportunities to do the right thing—and not as simple business or legal decisions, which tend to degenerate into box-ticking exercises. And take a ‘broken windows’ approach to obeying policies, ethical guidelines, and laws: Every small infraction can begin a slippery slope descent into more serious wrongdoing. Praise skeptics and individualists in your organization, by celebrating the courageous act of speaking up as serving the firm’s best interests and encouraging every employee to think like they alone are responsible for doing what’s right, no matter who might else might witness wrongdoing or be a part of it, as not to be a prisoner of groupthink.”

Richard BistrongRichard Bistrong is the CEO of Front-Line Anti-Bribery and a contributing editor of the FCPA Blog. He was a former International Sales VP, FCPA violater, and FBI/U.K. cooperator, having served 14 months in federal prison for violating the FCPA.