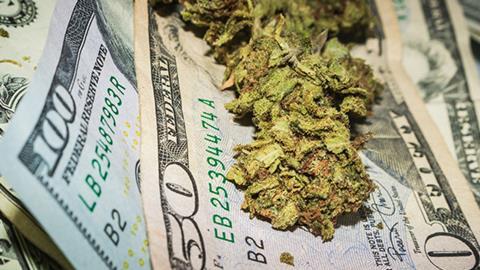 Momentum has been on the side of marijuana legalization for some time now, with 33 states and the District of Columbia having legalized cannabis in some form. Now, there may be progress in allowing banks to legally take part in that ever-expanding retail revolution.

A recent hearing convened by the House Financial Services Committee, tied to newly proposed legislation, “The Secure And Fair Enforcement Banking Act of 2019,” tackled the disconnect between state and federal laws and regulations. The dilemma: Even as states legalize pot sales, marijuana remains illegal under federal law and, as such, financial institutions are refraining from offering banking services to businesses in the space based on legal and compliance risks.

According to a recent American Bankers Association survey, “an overwhelming number of banks (99 percent) want Congress to take action to address the gap between state and federal law that prevents banks from serving marijuana-related businesses in states that have legalized the drug,” says Rob Nichols, president of the ABA. Three in four ABA member banks reported having had to close an existing account, terminate a banking relationship, or turn away a potential customer because of a connection to cannabis.

“As a result, many marijuana-related businesses have resorted to dealing entirely in cash, which can make them lucrative targets for criminals and create potential public safety risks for local communities,” he added.

“Washington had a turning point in the national debate over banking and cannabis this month,” Nichols wrote in a Feb. 18 opinion piece for The Hill. “For the first time, Congress held a hearing on the issue, with lawmakers and witnesses outlining the harm resulting from the growing gap between state and federal laws.” While the ABA is not taking a position on the legalization of marijuana, “reconciling the cannabis conundrum would allow the profits from cannabis sales—which are estimated at $24 billion by 2025—to be safely deposited within regulated financial institutions.”

A first step to that goal could be the SAFE Banking Act. Reps. Ed Perlmutter (D-Colo.), Denny Heck (D-Wash.), Steve Stivers (R-Ohio), and Warren Davidson (R-Ohio) presented a draft of that bill for discussion at last week’s Financial Services Committee hearing. It would harmonize federal and state law concerning cannabis-related businesses and allow these businesses access to banking services. Also, depository institutions and their employees would be exempt from federal prosecution or investigation solely for providing banking services to a state-authorized cannabis-related business.

Among those testifying at the hearing was Fiona Ma, California’s recently elected state treasurer. She joined the State Board of Equalization in 2014, one of the two principal tax collection agencies in California where cannabis dispensaries are supposed to collect and remit sales taxes.

“Duffel bags and sometimes suitcases of cash would arrive quarterly at some of our designated offices, and some business owners had to drive 350 miles to pay their taxes,” Ma said. “I asked how much we collected from the cannabis industry, and my agency really didn’t know since tax revenues are ‘commingled’ and deposited with other cash tax payments.”

The cannabis market in California alone is expected to exceed $5.1 billion in overall revenue in 2020, according to researchers. The legal cannabis market could triple over the next four years to as much as $32 billion globally.

“The U.S. will fuel a majority of this revenue, and it’s critical we accommodate the magnitude of this economic uptick with access to banking for this new state-regulated industry,” Ma said.

“The goal was, and is, to help set a standard nationwide, enabling other credit unions to eventually serve the industry with tried-and-true best practices.”

Ma addressed “additional problems we don’t commonly think about related to the unbanked cannabis industry” and “the negative impact on families when employees are paid in cash because their cannabis employer can’t secure a payroll system as an unbanked business.”

“How is someone supposed to build credit by operating primarily in cash? If they can’t build credit, how can they buy a car, buy a home to support their family, or even qualify to rent a home or an apartment? Social Security, state, and federal income taxes can’t be accurately collected on cash payments wage statements done manually to employees. This doesn’t allow employees to pay into, or receive, Social Security benefits,” she said.

One of the “surest ways of bringing a business out of the shadows” and collecting lawfully imposed taxes is to promote access to the economy’s banking and payments systems, Ma told the committee. “Yet, federally regulated banks and financial institutions risk severe penalties if they inadvertently aid and abet—no matter how remotely—activities that the federal government deems illegal. It is for this reason that I believe that the risk management of these financial service firms has been transformed into outright risk avoidance by too many institutions and why we need your help.”

“In terms of safety, businesses are often forced to operate as ‘cash-only,’ making the businesses and their customers incredibly vulnerable to robberies and other threats,” testified Corey Barnette, owner of the District Growers cultivation center and Metropolitan Wellness Center dispensary, both licensed in Washington D.C. “Many dispensaries have hired onsite armed security guards, maintain excessive onsite security infrastructure, and utilize armored trucks to transport cash. The problem of large cash reserves on site creates an enormous headache and significant public safety threat.”

Regardless of the risks, not all banks are walking away from the cannabis world.

Rachel Pross is chief risk officer for Maps Credit Union, a midsized financial cooperative in Salem, Ore. It is the only financial institution in the state of Oregon that has continuously served the cannabis industry since 2014.

“When Maps’ board of directors voted to serve cannabis businesses, they knew it would be one of the first programs of its kind in the country, and they committed to fostering the diligent culture of risk management and compliance necessary to do it properly,” Pross explained. “The goal was, and is, to help set a standard nationwide, enabling other credit unions to eventually serve the industry with tried-and-true best practices.”

To comply with the FinCEN guidance, the credit union has established “a rigorous screening and compliance protocol and has invested considerably in the robust infrastructure required to appropriately monitor and maintain these high-risk accounts,” Pross said. “We have a centralized team of dedicated professionals in our cannabis banking program, and the staffing averages one full-time employee for every 40 cannabis business accounts.” The BSA and AML program has been reviewed by both state and federal financial regulators on multiple occasions, and the bank also obtains an independent, external compliance audit of the program annually.

In accordance with the FinCEN guidance, the credit union files quarterly Suspicious Activity Reports on every cannabis-related business account in the organization. These SARs are prioritized with regard to accounts suspected of possibly engaging in illegal activities, such as diversion into other states, money laundering, or black-market sales. Currency transaction reports are filed on every cash transaction or group of cash transactions aggregating to over $10,000 in one business day.

Maps filed more than 13,500 individual reports related to cannabis business accounts in 2017 and 2018 alone. When filing SARs, it provides the names of all individuals who are involved with the accounts, all account activities broken down by individual transactions, and a description of that activity.

“We educate each and every one of our cannabis-related accountholders about the FinCEN Guidance and the criticality of compliance and transparency,” Pross added. “This ultimately reduces the likelihood of financial crime on their parts. They want to keep their accounts with us, so they carefully adhere to the requirements given to them.”

Know your customer… and their electrician, housekeeper, and utility companies

Indirect connections to marijuana revenues are “hard, if not impossible, for financial institutions to both identify and avoid,” Pross stressed. “Growers and retailers in the cannabis industry do not operate in a vacuum. Like almost every other business, the industry is dependent upon any number of vendors and suppliers to function. These are everyday businesses like the printing company that makes a business card, the office supply company that fulfills order for pens and copy paper, the housekeeping crew or landlord that cleans or rents office or retail space, and even the utility company that provides that office/retail space or growing location with water or electricity.”

Under the existing status quo, she explained, a credit union that does business with any one of these indirectly affiliated entities could unknowingly risk violating the federal Controlled Substance Act, USA Patriot Act, Bank Secrecy Act, or the Racketeer Influenced and Corrupt Organizations Act, among other federal statutes.

“The cannabis industry is complex and goes well beyond compliance associated with any other type of banking relationships,” says Gregory Deckard, president, CEO, and chairman of State Bank Northwest. He testified on behalf of Independent Community Bankers of America.

“The risk extends beyond direct cannabis businesses, the license growers, processors, and retailers,” he explained. “Consider the plumbers, electricians, internet service providers, and accountants, all of which offer their services to the broader public, whose customer base includes cannabis-related businesses. These businesses are also drawn into the net, as is any business that, knowingly or unknowingly, derives any revenues from a cannabis business.”

“It raises the question,” Deckard said, “of how many degrees of separation from cannabis do I, as a banker, have to investigate and monitor to ensure compliance with federal law.”

Problems also extend to consumer lending. “Employees of cannabis-related businesses are paid from the sale of cannabis, which are Illegal proceeds under federal law and technically subject to a superior federal lien,” he said. “This means that, as a banker, I cannot rely on the employee’s salary to underwrite consumer debt. If I want to make a car loan, for example, I would have to consider outside collateral, such as home equity.”

“This may sound like an overabundance of caution and extreme risk aversion, but I can assure you the risks are very real and carry potentially catastrophic consequences for community banks, including asset forfeiture of tainted deposits which could put a bank out of business overnight,” Decker said.

There is also the risk that an institution, after facing federal troubles, will become “toxic to other banks it relies upon for day-to-day services,” he explained. These include credit card processors, check clearing providers, wire transfer services, correspondent banks, and bankers’ banks. Even the largest armored car services provider in his area has cancelled contracts with banks that serve the cannabis industry.

“An effective statutory safe harbor for banks that offer services to CRBs that comply with state law would offer the needed clarity for those banks that choose to bank those businesses,” Deckard said, adding that the SAFE Banking Act would do so.

Although the SAFE Banking Act has garnered bipartisan support, there remains pushback from some Republicans on the Financial Services Committee.

He chided Democrats on the Committee “who are morally opposed to a legal service such as small-dollar loans and will fight tooth and nail to ensure the states have no leeway to make their own decision, yet here we are acquiescing to the decision of some states fighting to provide banking services to a federally illegal industry.”