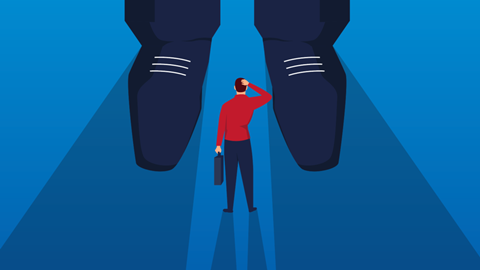 Did Goliath steal David’s money in first round of business rescue funds?

Even as Congress works to refill a federal loan fund meant to help small businesses survive coronavirus shutdowns, some large, publicly traded companies are taking heat for receiving the loans.

Publicly traded companies have accepted between $243 million and $365 million in low-interest loans from the federal Paycheck Protection Program (PPP), according to CNBC and the Associated Press.

Among the publicly traded companies receiving loans are DMC Global, Wave Life Sciences, and Fiesta Restaurant Group, according to public records viewed by the two media groups. The loan pool totaled $349 billion, and the U.S. Small Business Association says 4,400 of the approved loans exceeded $5 million. The size of the typical loan nationally was $206,000, according to an SBA report released April 16.

“We see that a ton of public companies got funded that have access to capital markets and should really be disqualified from the PPP program and send their checks back,” said Julio Gonzalez, CEO of Engineered Tax Services, a Florida-based firm that serves certified public accountants and their clients nationally. “The true small business has zero access to capital markets, and they need this next round of funding.”

“These are the businesses with the least ability to cope with four weeks, six weeks, eight weeks of being effectively stopped in their tracks,” Ruddock said. “If we don’t solve this problem now, we will affect the economic recovery. A lot of these small businesses won’t come back otherwise, and that will leave a hole in the economy.”

“While many small businesses received money from the PPP in the first round, a majority of small businesses were left without even a seat at the table because their banks told them they would not be processing their requests or their local bank was not participating in the program,” said Alex Cohen, CEO of Liberty Small Business Funding (SBF), a finance company that serves small businesses seeking to purchase their own commercial property.

Liberty SBF is a non-bank lender (NBL) that acts as a lending partner to community banks, credit unions, accountants, and brokers, Cohen said. Although NBLs have the capacity to process thousands of loans, they struggled to serve them because many small businesses were left without a seat at the table in the first round, he said.

NBLs “have been poised to process thousands of these loans for small business owners across the country,” Cohen said.

The next round of federal funding for small businesses—$310 billion in forgivable loans, set to be approved by Congress this week—will replenish the $349 billion that was emptied by coronavirus-struck companies in less than two weeks.

“Demand for this is going to be infinite,” predicted Pete Isberg, vice president of government affairs at Automatic Data Processing, commonly known as ADP, a provider of human resources management software and services.

Will the next round help the little guy?

Congress has inserted language into the second round of funding that is meant to facilitate loans to smaller businesses. About $30 billion of the $310 billion has been earmarked to banks and credit unions with between $10 billion and $50 billion in assets, while another $30 billion is set aside for banks and credit unions with assets less than $10 billion. Many small businesses, especially those located in small cities and rural areas, conduct business with their local banks.

Ruddock said the SBA has also clarified many aspects of the PPP since it was unveiled.

“In the first wave, we couldn’t figure out how to effectively participate,” he said. “It has become clearer what role we can play in transferring this money to our customers.”

If businesses receive loans, the next step is producing paperwork, said Isberg. ADP produced 250,000 payroll cost reports for their customers, a key piece of paperwork required by lenders to qualify for the loans.

The federal loans will be forgiven if companies can prove they used the money to keep employees on the payroll and did not slash salaries by more than 25 percent, among other provisions.

In eight weeks, companies will have to provide paperwork proving they met those terms if they want to avoid paying back the loan. Isberg says one key issue is that neither the U.S. Treasury nor the U.S. Small Business Administration, which are administering the loans, have clearly defined what a full-time employee (FTE) is. That will be problematic when it comes to providing that paperwork unless the definition is clarified, he said. One federal definition of an FTE, found in the Affordable Care Act, would not apply to companies with less than 50 employees, he said.

“The language in these bills (regarding FTEs) wasn’t terrifically clear,” he said.