What factors are driving change in your corporate investigations process?

Numerous companies still rely on inefficient, manual processes when conducting investigations, resulting in wasted time and resources. And yet, many compliance officers and in-house lawyers would tell you the challenges that come with the rise in the number and types of investigations.

That’s the finding of a recent cross-industry poll from Compliance Week and information management software provider OpenText, the “Investigations Benchmarking Survey,” that polled 200 compliance, audit, legal, and risk practitioners on how they view the investigative process within their companies, what has changed in the process during the last few years, what to expect in the future, and much more. Respondents represented the following functions: compliance (42 percent); internal audit (18 percent); legal (14 percent); risk management (10 percent); security (4 percent); HR (3 percent); and IT (1 percent), with 8 percent choosing “other.”

Most respondents (65 percent) selected the compliance function within their organization as having primary responsibility for overseeing investigations, closely followed by legal (54 percent).

Breaking it down further, the survey revealed which investigation categories are top of mind for those polled. Data privacy, cyber-security, third-party C-suite vetting, and regulatory investigations ranked high on the list.

“Incident response in particular is a growing source of both forensic and ESI (electronically stored information) investigations as more and more organizations experience security breach and cyber-security threats,” says Tom Gricks, lead strategy consultant for OpenText. “Organizations must be prepared to expedite the isolation, itemization, and analysis of all manner of data, including both personal data such as personally identifiable information (PII) and protected health information (PHI), as well as commercially sensitive documents.”

The plurality (42 percent) of those polled said their biggest pain point in managing and conducting investigations is “not enough time to complete work with available resources,” and yet 46 percent responded they expect their budget for investigations to remain the same. Another 12 percent said they expect it to decrease. In response to another question, 76 percent of respondents said they are still employing manual review.

Other common pain points cited by respondents included “collecting data from remote and/or off-network locations” and “difficulty collecting data from new sources of electronically stored information” at 39 and 38 percent, respectively. Following those were “lack of a skilled team” (32 percent) and “volume and complexity of data”(30 percent).

Compounding these problem areas is the archaic way many companies are still conducting investigations. Specifically, 76 percent of respondents said their investigation teams still perform a manual review to identify key documents in an investigation. Just 30 and 31 percent, respectively, said they use advanced analytics machine learning, such as technology-assisted review, and only 7 percent reported using artificial intelligence (AI) capabilities.

The survey also queried respondents on who was responsible for purchasing decisions in terms of investigations technology, with 30 percent noting that duty belonged to legal, followed by compliance at 22 percent and IT at 17 percent. When asked whether the same person was responsible for hiring third-party providers for investigations support, a significant 83 percent said yes.

In answering where the biggest chunk of their investigation spend is allocated, 62 percent of respondents said toward “consulting services” and/or “legal service providers,” while 40 percent said law firms. Among the reasons respondents gave for hiring third-party service providers included for forensic purposes; to do electronic discovery (e-discovery); to help evaluate PII; and to provide expertise the company does not have.

How is technology being utilized?

Most investigations today involve massive amounts of ESI, including the need to engage in data analysis and review associated with regulatory investigations, cyber-security/data privacy compliance, financial reporting, and employee misconduct, Teichholz notes. These issues have only been heightened by the pandemic and remote work realities. According to the survey findings, two of the top issues most likely to lead to an investigation were cyber-security and data privacy.

Additionally, survey respondents indicated the top three types of investigations that generate the most amount of ESI for collection and review were employee conduct (37 percent), cyber-security and data breaches (35 percent), and regulatory investigations (34 percent).

The survey breaks down technology’s role in supporting various investigatory functions, including data collection, which 74 percent of respondents deemed very important. Following was e-discovery (60 percent), legal hold (58 percent), forensic analysis (57 percent), and a tie between analytics and early data assessment (50 percent). (See below for a full breakdown of respondents’ answers).

Other areas of focus

Investigations related to “C-suite vetting” were cited by respondents as another key area of focus. Many modern companies recognize hiring senior executives demands a more vigorous vetting of candidates, “because there is so much scrutiny today on everything that the C-suite does,” says Gricks.

Especially for large, well-known companies, a senior executive’s words or actions don’t even have to be criminal or fraudulent in nature to come under scrutiny. “It may simply be a proclivity that leads someone looking from the outside in to be critical of that individual’s background,” Gricks says.

The survey findings also reveal that in addition to private complaints and proactive compliance monitoring, whistleblowers are still an important trigger of an investigation (53 percent). Teichholz expects this number should significantly increase as well.

“Whistleblowers are being encouraged, protected, and incentivized with financial awards more than ever before,” he says. “Expect to see even more investigations in the future triggered by whistleblowers as a speak-up culture is being embraced around the world.”

According to the findings, the top three issues that “almost always” result in litigation are those that stem from regulatory investigations or enforcement, trade secrets, and financial reporting. Following closely behind were issues having to do with data privacy compliance, employee conduct/workplace issues, and cyber-security/data breach matters.

“The conclusion of an investigation is increasingly unlikely to mark the end of the matter,” says Tracy Drynan, a senior consultant at OpenText. Especially if the matter becomes public, the company can face follow-on actions brought by customers, third-party suppliers, or former employees, she says.

Reducing litigation risk—or better managing it—begins with conducting a thorough investigation from the get-go, Gricks says. Yet, as the findings revealed, many companies still rely on dated processes that are holding them back from conducting truly thorough and robust investigations.

“Companies really haven’t made the transition to a true investigative approach,” he says.

For legal and compliance teams, what that means in practice is recognizing data analytics and technology alone do not make for an effective investigation. “You need experienced individuals who can drive the analytics,” Drynan says.

Prudent companies today leverage what Drynan refers to as an investigatory “strike team,” which she describes as a small, elite group of three or four people “fluent in technology and analytics” who know how to hunt for answers in the data in an intentional way.

Of course, a true investigation differs from a document review—the kind legal teams employ for e-discovery, for example—which doesn’t necessarily piece together all facts and evidence in a way that tells a complete story, Drynan says. A strike team, by comparison, essentially lives and breathes the data day in and day out, connecting the dots between all evidence and documents, even those that initially seem unrelated or irrelevant, she explains.

In essence, a strike team complements in-house counsel, compliance, and audit because, by surfacing the key facts, it enables the company to better inform what direction an investigation should take; what witnesses to interview; whether to self-report a matter; or where remediation efforts may be needed, for example. 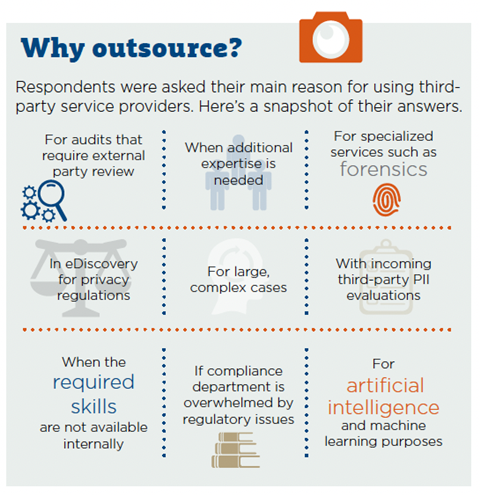 The survey findings also pointed to the multidisciplinary aspect of investigations today, which is “consistent with some of the trends we have been seeing over the past few years,” Teichholz says.

Between the proliferation in global data privacy regulations, rising cyber-threats, and more companies going digital, all these factors combined have resulted in companies taking “a more cross-departmental approach to investigation management and execution,” he says.

What we’re seeing now is a convergence in the collaboration between risk functions—including compliance, risk, legal, audit, HR, security, and IT. Each role brings to the table expertise that informs or touches upon the objectives and priorities of other departments, “including findings that indirectly help identify other vulnerabilities to address broader policy, process, or system problems,” Teichholz says.

The more interconnected all these various departments are and the more they provide value to each other, the more effective investigations and risk mitigation will be.