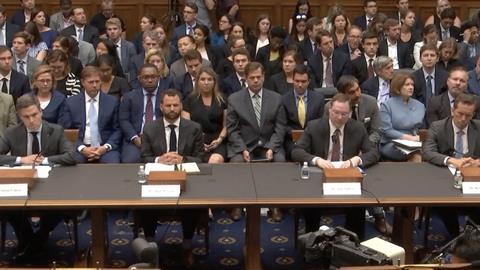 “Just because a business is big doesn’t mean it’s bad.”

That assessment of tech sector titans by Rep. James Sensenbrenner (R-Wis.) cut to the chase during a hearing convened by a House Judiciary subcommittee Tuesday. The session—the second in an ongoing series on potential antitrust trespasses at Amazon, Google, Facebook, Apple, and others—addressed, in large part, whether government action was needed to address what critics perceive as the anti-competitive, entrepreneur-chilling effects these companies trigger with their size and scope.

Kyle Andeer, Apple’s chief compliance officer—a position he said focuses his efforts on business ethics and competition concerns—similarly dismissed the claim that the bigger they are, the more likely it is tech firms will push down and bury smaller, upstart competitors.

“For Apple, the competition is fierce,” Andeer testified, adding that the benefits of his company’s well-refined ecosystem are “clear to customers” because they enable “world class security, unparalleled ease of use, and seamless integration across devices.”

“Since its launch in 2008, the App Store has been vibrant, competitive, and ever-growing,” he added. “Only a very small number of the nearly 2 million apps in the App Store are made by Apple, and in every category where our software competes, we face strong competition. Our nation’s entrepreneurial spirit and competitive environment have led to innovations during each generation—and that must continue.”

A gang of four?

He cited the Department of Justice’s Antitrust Division as recently noting, in a legal brief, that Google controls almost all the search market in the United States, and over 90 percent of all Internet searches are conducted via its platforms. Amazon controls nearly half of all online commerce in the U.S., and half of all American families have an Amazon Prime account, up from 35 percent just three years ago.

The following is an audio recap of testimony presented by Carl Szabo, vice president and general counsel at NetChoice, a trade association of leading e-commerce and online companies. He is also an adjunct professor of privacy law at the Antonin Scalia Law School at George Mason University

Facebook controls more than 58 percent of the U.S. social media market, and it has approximately 2.7 billion monthly active users across its platforms. And Apple, the DOJ noted, “is under increasing scrutiny for abusing its role as both a player and a referee” in the App Store.

“Several reports by leading economists and competition experts also suggest that the dominance of these firms is unlikely to be challenged by new rivals due to certain features that characterize digital markets,” Cicilline added. “The combination of high switching costs and the self-reinforcing advantages of data can result in a winner-take-all market that shields dominant firms from competitive threats. This is a kill zone around Google, Amazon, Facebook, and Apple that prevents new startups from entering the market with innovative products and services to challenge these incumbents.”

Further squashing competition and deterring the efforts of venture capitalists is that Big Tech can just buy difficult competitors off the playing field. “Over the past decade, the largest technology firms have acquired over 436 companies, many of which were actual or potential competitors,” Cicilline said. The dearth of governmental challenges to potential anti-competitive behavior in the two decades since the Justice Department filed a landmark monopolization case against Microsoft has “created a de facto immunity for online platforms.”

House Judiciary Chairman Jerrold Nadler (D-N.Y.) echoed the sentiment. “It is effectively impossible to use the Internet without using, in one way or another, the services of the four providers appearing before us here today,” he said.

Among the questions Nadler posed: How can, and do, these platforms use their market power? What are the effects of this conduct? How should policymakers respond?”

Sensenbrenner, however, questioned preconceived opinions heading into the hearing.

“Breaking up big platforms won’t necessarily solve a problem associated with those platforms,” he said. “Breaking up the big platforms into smaller ones might actually compound the problems of protecting privacy. We should not rush to amend the antitrust laws or break up companies by Congressional fear based upon false notions that being big is inherently bad, or that everything a big company does should be presumed to be anti-competitive.”

“There is a direct correlation between the growth of small entrepreneurs and online platforms like eBay, Facebook, and Google,” said Carl Szabo, vice president and general counsel at NetChoice, a trade association of leading e-commerce and online companies. “These platforms are helping small businesses the same way a large retailer operates as an anchor for a shopping center or mall.”

Tim Wu, a professor at Columbia University School of Law and author of “The Curse of Bigness: Antitrust in the New Gilded Age” failed to see the wisdom of that comparison.

“I don’t think ‘rely on the giants’ is a good innovation policy for this country,” he said. “We’ve tried it before: in telecommunications for almost 70 years, in the car industry for many decades, and in many other industries as well. Over the last century, competitive, open sectors have proved themselves superior to those monopolized or dominated by a ‘Big Three’ or ‘Big Four.’

“It is effectively impossible to use the Internet without using, in one way or another, the services of the four providers appearing before us here today.”

“Fortunately, it is not too late to act. The United States has faced excessive consolidation before and found ways to encourage innovation and entrepreneurship in cycles where dominance is the pattern. What makes the United States so distinctive is that, just about every decade, it produces new winners. We aren’t waiting around seeing what IBM and Hewlett-Packard, the powers of the 1970s, will do next, and we should not have an innovation policy that consists of depending on what Google, Facebook, and Amazon will do or who they will buy.”

Maureen Ohlhausen, a partner at law firm Baker Botts and formerly of the Federal Trade Commission, suggested a focus be placed on vertical mergers, deals in which the parties do not directly compete but operate on different levels of the supply chain. Apple’s purchase of music-recognition app Shazam and Google’s acquisition of ITA Software and its flight search engine would fit within this distinction, she said.

“The vast majority of vertical arrangements are pro-competitive. Vertical deals eliminate no head-to-head competition in any market, create cost-saving benefits such as the elimination of double-marginalization, and incentivize investment by aligning upstream and downstream incentives,” Ohlhausen said. “Vertical mergers can, however, raise antitrust concerns when the parties gain an ability and incentive to foreclose their rivals from a significant portion of the market.”

As with horizontal mergers, vertical deals should be evaluated case-by-case based on all the available evidence and not pre-judged based on the size of the parties or concerns outside of preserving market competition, she said.

“Trying to ‘unscramble the eggs,’ through a divestiture remedy long after a merger has been consummated or using a breakup as a remedy in a conduct matter, is a drastic step that carries serious risk of doing more harm than good for competition and consumers,” Ohlhausen said. “I agree with my former FTC colleague, Commissioner Noah Phillips, that breaking up established companies, even those credibly accused of monopolistic conduct, is a ‘treatment [that] may be worse than the disease’ and should be a last resort for the most inveterate antitrust offenders.”