1
We can all learn from this dedicated dozen 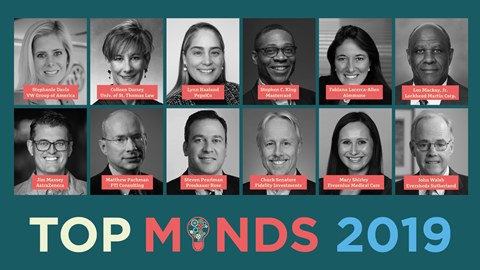 We can all learn from this dedicated dozen

Benchmarking is big in compliance, with companies regularly comparing their programs to those of their peers. We’d suggest, however, that perhaps they’d be better off looking at the people behind the programs instead of the policies and procedures.

All Compliance Week subscribers and previous registrants are required to reset their passwords before logging in to the new site for the first time. For help, email us or call customer service at 888-519-9200.

We present that theory as a means of introducing our Top Minds Class of 2019, the stars of the compliance community (chosen from nearly 200 nominees) whose achievements are dwarfed only by their personal integrity and dedication to ethics. This year’s 12 standouts, whose in-depth profiles follow in this special edition, include the following:

The class also includes our inaugural Top Mind of Tomorrow, Hannah Levine, who is studying compliance at the Seton Hall School of Law and is in the top 3 percent of her class. After graduating next May, she plans on practicing at the “intersection of health law and compliance,” according to one of her professors.

Sounds like a Top Mind in the making to us.