For every person brave enough to point out bias in the workplace, there is someone standing by to push back on the claim. The backlash might manifest as skepticism, cynicism, agitation, or vitriol. The common denominator is denial. But why? 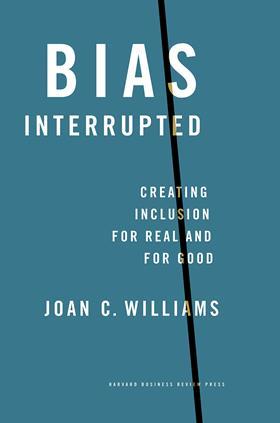 Joan Williams, author of “Bias Interrupted: Creating Inclusion for Real and for Good,” has put her finger on a prime culprit: identity threat.

“People are highly motivated to defend themselves against threats that diminish their sense of competence, dignity, or self-worth,” she writes in her new book. An allegation of bias can challenge a deep-seated belief in the indissolubility of meritocracy. It can trigger feelings of guilt, shame, and indignance. Entrenched in these complex feelings, denial becomes the coping mechanism.

“That doesn’t happen at our company” is a common refrain Williams hears from organizations that enlist her help. Williams leads a program called “Bias Interrupters” through the Center for WorkLife Law (WLL) at the University of California Hastings College of the Law. Through this program, Williams helps companies identify structural biases and address them on a systemic level. Her toolkit offers practical tweaks to basic business processes that help companies put desired principles of diversity, equity, and inclusion (DEI) into practice.

“Bias Interrupted” expounds on the work of this program.

“You can’t change what you can’t see,” Williams writes. Bias must be made visible before it can be checked. If you haven’t lived it, you might genuinely not see it. Another problem is the human tendency toward willful blindness—a reluctance to see. Companies can offer employees sensitivity-based training and educate on implicit biases, but corporate diversity programs will fail if people feel subconsciously threatened and become defensive, rigid, or checked out.

Williams’s workshop model, described in the book, circumvents this outcome.

“Our training is not scoldy. It’s very evidence-based. It presents the problem and says, ‘I bet you can figure out how to solve this.’ That’s a frame that most people feel very comfortable with,” Williams told Compliance Week in a phone interview.

Williams’s book takes the same blunt approach: Here is the mountain of evidence showing how biases play out in everyday workplace interactions; here is how bias mutates by age, race, gender, social class, and maternity/paternity status. The goal is not to convince readers they are guilty of bias—that is beside the point—but they are part of a system that is. Then it empowers them to play a role in interrupting it.

The book brims with compelling, fascinating research. Williams has been studying bias for decades and peppers her work with incredible findings.

She cites a number of matched résumé studies. One sent 1,276 job applications using the identical résumés of two women, except one listed her membership in the parent-teacher association. The mother candidate was half as likely to receive a callback for an interview (Correll, Benard, and Paik, 2007).

Another experiment sent résumés with identical qualifications but different hobbies to elite law firms. A candidate with elite hobbies like polo or sailing was 12 times more likely to get a callback than a candidate who listed mentoring or pickup soccer (Rivera and Tilcsik, 2016).

The subtlety of bias is astounding.

Williams’s own research on workplace bias is the centerpiece of the book. For a decade, Williams’s team at the WLL conducted 14 different studies of nearly 18,000 people across different industries and organizations using the Workplace Experiences Survey (WES). The culmination of that research led to the identification of five patterns of bias Williams discusses in detail: prove-it-again bias, tightrope bias, tug-of-war bias, racial stereotypes, and maternal wall bias.

“The WES survey shows it isn’t just that Janey left because she had children or that Jamal had a ‘personality problem.’ These are deep patterns within the organization. That’s what evidence can do,” Williams told CW.

Williams’s studies show privileged white men have clear advantages in the workplace due to structural biases, and this is both validating and disturbing. Observing it anecdotally is one thing, but the statistics speak for themselves.

Fortunately, Williams doesn’t leave you hanging in despair. Once she has rested her case, she counterbalances the book with solutions that are universally applicable, practical, and—perhaps best of all—immediate.

“The bottom line is structure and discipline. Doing things on the fly, without evidence and without standards, is rocket fuel for bias,” Williams writes.

With both hiring and performance evaluations, identify the criteria in the selection or evaluation process, respectively. Keep track of when requirements are waived—and for whom.

“I can’t tell you the number of times—I’ve been in academia for almost 40 years—that I’ve seen the parameters for a search for a new professor get negotiated over and decided that all the women and people of color be eliminated because they didn’t fit that criterion. Then, some white guy candidate waltzes in and, all of a sudden, the criterion disappears,” Williams said. “Don’t just say, ‘Don’t hold people to different standards.’ Keep track of when you waive requirements. That will often tell a tale.”

Williams also instructs on how companies can preserve culture without sacrificing DEI. Closely examine one’s definition of “cultural fit” and eliminate exclusionary attributes. Hire someone for their competencies, their work habits, their workplace disposition—not for their leisure activities or whether you’d enjoy lunch with them.

“… If you’re hiring only ‘mini-mes,’ you are by definition not hiring for diversity,” Williams writes.

To make the book customizable, she also includes replicable survey items for readers to evaluate if their company has a backlash against diversity, prove-it-again bias, or a masculinity contest culture.

There are also chapters devoted to the linchpins of any DEI initiative: the chief executive, primarily; the chief diversity officer (CDO); human resources leaders; and managers.

“There are a lot of things an individual manager can do on their own. You can run inclusive meetings. You can require open access worksheets that have been shown to bring out bias in performance evaluations. You can make sure men/women who have had children don’t lose access to career-enhancing assignments, or they don’t have to work harder than ever to prove they still have fire in their belly,” Williams said.

It is heartening to know managers possess a certain leverage and locus of control at interrupting biases and championing the long-term goals and mission of a DEI initiative. That said, “You need that pivotal buy-in,” Williams cautioned. “You need resources and credit from the top. If you ain’t got it, you ain’t got it.”

CEOs, CDOs, HR leaders: These are the people who need this book in their hands most urgently.