Compliance Week is proud to announce Carrie Penman as the winner of its inaugural Lifetime Achievement in Compliance award, the top honor in the first annual Excellence in Compliance Awards program. 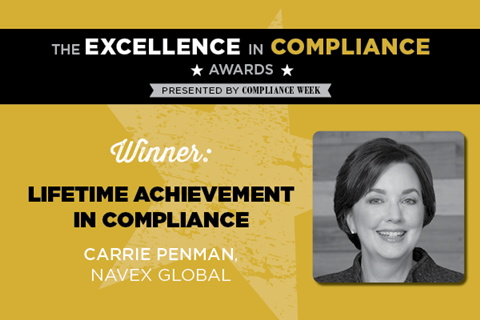 One of the pioneers in the field and an invaluable resource and trusted mentor to many, Penman—currently chief risk and compliance officer at software solutions provider NAVEX Global—has exuded excellence throughout her 25 years of experience. In fact, she was in ethics and compliance back in the 1990s, years before it became mandated for all public companies.

At NAVEX, where she has worked in various ethics-related roles since 2003, she is not only responsible for the company’s risk and compliance, she also serves as a thought leader and advisor to many of the world’s largest organizations, championing better ways of operating and doing business.

“With unparalleled experience, an impressive devotion to the industry and exceptional dedication to NAVEX, Carrie has truly earned this distinction,” said Bob Conlin, NAVEX Global President and CEO. “She has been a trailblazer in the industry, helping compliance move from checked boxes to fundamentally changing how businesses operate. At NAVEX, we’re proud to have her expertise and leadership setting such a high standard for the industry.”

Compliance Week’s Lifetime Achievement Award is designed to spotlight a longtime compliance practitioner that has upheld the core principles of ethics and leadership throughout his or her career, and we couldn’t think of a more fitting first-ever winner than Penman.

The winners of the Excellence in Compliance Awards will be announced live over the course of Compliance Week’s Virtual Conference, held May 18-19. Click below to find out more.

She will be further honored during Compliance Week’s upcoming Virtual Conference (May 18-19) and will receive her award at CW’s upcoming live event in Washington, D.C., currently scheduled for late October.

The inaugural Excellence in Compliance Awards will feature winners in 15 categories designed to call attention to standouts in every area of ethics and compliance. Winners in every category will be unveiled at CW’s Virtual Conference.

The following was the letter of nomination submitted for Penman:

Carrie Penman was a young manager at Westinghouse when her phone rang. The executive on the other end had one question: Did she want to be the company’s first ethics officer?

It wasn’t a common role in 1994 – and where it existed, it was typically held by senior-level executives taking jobs before retirement. But Penman said yes and began reporting directly to Westinghouse’s CEO and building a new program that included many elements that are still recognized as best practice today.

Penman didn’t know it then, but that phone call set in motion a series of events that changed her life – and helped shape an industry. More than a quarter-century later, Penman is recognized as a pioneer, leader, mentor and role model to hundreds of her peers. She’s a giant in ethics and compliance circles and a key contributor to some of the industry’s best practices and thought leadership.

At Westinghouse, Penman broke new ground by using helpline data to better understand the company’s sub-cultures and identify trouble spots. She has continued this passion for data analytics through her annual published analysis of NAVEX Global’s hotline data. Her benchmarks and analysis are discussed in tens of thousands of corporate board rooms every year.

After Westinghouse, Penman joined the Ethics Officer Association (now ECI) as deputy director and ethics officer, where she became a resource and sounding board for members in the emerging field. She still fields calls from professionals from all corners of the world seeking business and career advice. And she is a recognized resource for media outlets who regularly consult with her on the latest issues.

In 2003, Penman joined what is now NAVEX Global. As chief compliance officer and SVP of advisory services, she advanced the ethics and compliance programs of organizations around the world. Knowing that every organization and its risk profile are different, Penman embraced the challenge of going into an organization, quickly assessing its program maturity, organizational culture and leadership style, and helping take their program to the next level.

On one occasion, Penman was engaged by the board of a large global company that was in the line of fire from the government and the media. She and her team interviewed senior executives and met with many employees in focus groups confidentially. The organization took Penman’s resulting findings to heart and made major structural and operational changes that went beyond the ethics program and into operational strategy and risk management. The chairman told her that she had “materially and fundamentally changed the way they operated the company.”

In 2019, NAVEX Global named Penman chief risk and compliance officer recognizing the importance of integrated risk management with compliance. More than 25 years after her phone rang at Westinghouse, Penman has fundamentally changed the way many companies operate – for the better. Her leadership has been influential in an era in which compliance and risk management have grown in importance for organizations. She exemplifies the core principles of ethics and leadership in all she does.