The Financial Accounting Standards Board is formally proposing major changes to effective dates for several significant accounting standards, including a CECL delay for smaller reporting companies.

FASB has issued a proposal for public comment that would set back effective dates for the new rules on credit losses as well as leases and hedging for certain types of entities that have not yet adopted the standards. The board is asking for feedback by Sept. 16, so it can expedite new effective dates as soon as possible.

Banks of all sizes are calling for a delay in CECL’s Jan. 1, 2020, effective date so its effects on the economy can be further studied, but FASB’s proposed CECL delay would affect only smaller reporting companies as defined by the Securities and Exchange Commission. FASB proposes to extend their effective date for CECL to 2023, along with other public business entities that are not SEC filers and all private entities. 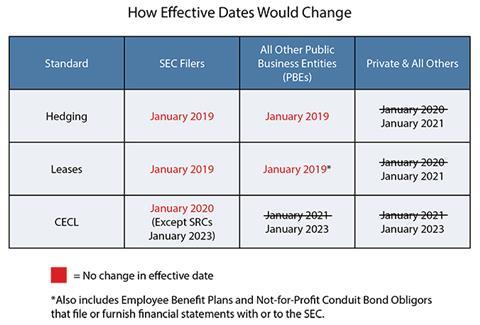 FASB has learned from stakeholders, particularly its Private Company Council and Small Business Advisory Committee, that private companies, not-for-profit organizations, and even some smaller public companies would benefit from having more time to implement major changes in accounting, said FASB Chairman Russ Golden. “This represents an important shift in the FASB’s philosophy around effective dates, one we believe will support better overall implementation of these standards,” he said in a statement.

FASB says it has been monitoring implementation, particularly of major accounting standards that have gone into effect the past few years—most notably new rules on revenue recognition in 2018 and the new standard on leasing in 2019. It has learned implementation issues are magnified for private and smaller entities based on a number of factors, including the availability of resources, the timing and sources of education in new standards, and the development or acquisition of technology.

Under the traditional model, FASB typically has required public companies to adopt standards first, followed by private and other entities a year later to give them time to learn from the public company implementation effort. The one-year difference with the recent major standards, however, has not provided enough time for companies to digest as even public companies are still working in implementation into their first year of reporting under new standards, especially with revenue recognition and leasing.