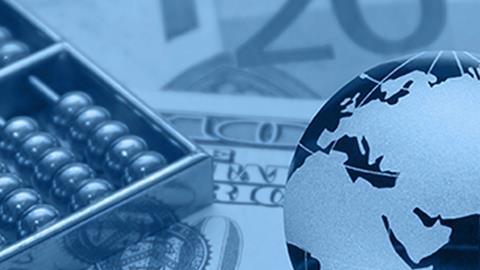 A new report published by the International Federation of Accountants shows “strong and sustained support” for both the adoption and implementation of international standards.

The International Standards: 2019 Global Status Report covers 173 IFAC-member organizations and the 130 jurisdictions in which they operate, making it the first-ever baseline for global adoption status. “Since there are no international laws requiring nations to adopt and implement international standards, support from IFAC’s member organizations for these dual objectives is critically important to progress,” said IFAC CEO Kevin Dancey. “This new report reinforces the impact of standards in driving transparency and creating a common language for high-quality financial information.” 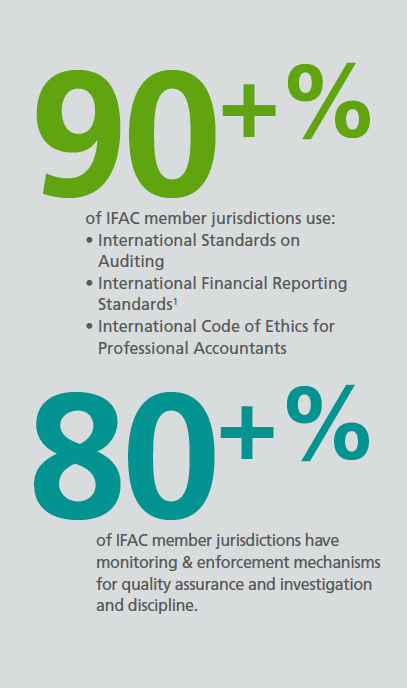 “Worldwide, developing quality assurance systems has been an important element of the global regulatory agenda and restoring public confidence in audited financial information,” the report noted. Jurisdictions show a higher tendency to establish and operationalize a quality assurance review system that completely meets international best practices than an investigation and discipline that does the same (50 percent vs. 22 percent), even though more jurisdictions have an investigation and discipline mechanism in place than a quality assurance system (99 percent vs. 86 percent).

ISA and IFRS (80 percent and 79 percent, respectively) have the highest degrees of adoption by direct reference. In these cases, the standards are mentioned directly in legislation or the national standard setter adopts the standards as issued by the IAASB and IASB with no modifications.

The report further shows a positive trend in international standards’ usage where IFAC member organizations have at least some role in the standard-setting and regulatory environment. Member organizations usually share adoption responsibility with multiple stakeholders, including government, audit oversight authorities, financial-sector regulators, and other PAOs.

The report also noted a “positive trend” between involvement of IFAC members in the adoption of standards and the usage of those standards. Member organizations are a “driving force behind adoption and implementation of both international standards and best practices,” even where they don’t have any direct responsibility for adoption, IFAC said.

According to the report, the IES have the highest rate of partial adoption. “In these cases, partnerships and development assistance are essential in strengthening accountancy education,” IFAC said. 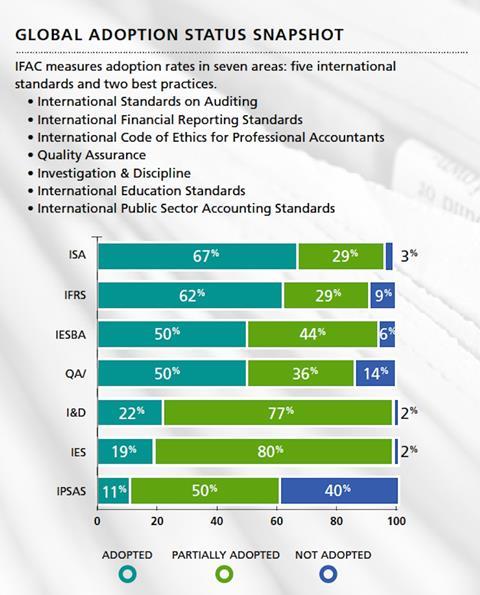 The report also discusses organizations’ pace of progress in adopting and implementing international standards and best practices. According to the report, 61 percent (105) of IFAC member organizations substantially carry out or have formed strong processes for adoption and implementation support in all areas. “These include a range of actions, from recently aligning national standards and/or procedures (quality assurance and investigation and discipline) with international ones to having well-known and established, successful processes with robust implementation support available for their members,” IFAC said.

“International standards have come a long way since 2000 when there was little to no global adoption,” Dancey said. “While there is always more to be done, IFAC member organizations play a vital role in ensuring the successful implementation of international accountancy standards, which ultimately help drive sustainable economic growth and financial market stability in their respective jurisdictions.”