Modest improvements in the audits of broker-dealers do little to absolve the need for firms to evaluate how they can enhance their systems of quality control, according to the latest figures from the Public Company Accounting Oversight Board.

Of the 66 firms inspected, only seven had no deficiencies in their broker-dealer audits—an improvement over the ratio of three out of 67 from 2018. Overall, the PCAOB reviewed 106 audit engagements from 2019, with 31 returning no deficiencies. 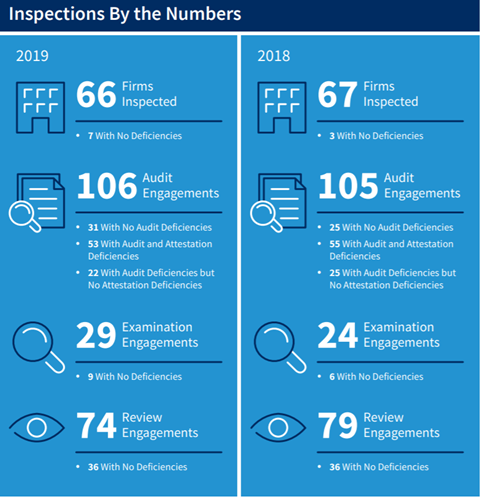 Among the areas where frequent deficiencies were noted include examination engagements (69 percent deficient), review engagements (51 percent), and financial statement audits (71 percent). These numbers are each down from 2018—75 percent; 54 percent; and 76 percent, respectively—but still show a need for firms to evaluate how they can improve their system of quality control, the PCAOB said.

“A strong system of quality control can serve to prevent engagement deficiencies from occurring,” the PCAOB stated. “Firms should take what was learned from these 66 firm inspections, including the examples of effective procedures, and consider how to proactively implement improvements, rather than reacting as a result of a PCAOB inspection.”

With regard to examination engagements, the PCAOB highlighted insufficient testing of the design and operating effectiveness of internal controls over compliance as a frequent problem area. These include testing of management review controls, verifying controls related to FINRA’s Account Statement Rule, and performing compliance tests related to net capital and reserve requirement rules. The PCAOB noted “focusing on the risks associated with a control will help firms develop appropriate testing procedures and lead to further improvement in this area.”

For review engagements, the PCAOB broadly said firms “did not sufficiently evaluate results of review procedures, because they did not evaluate information that should have caused them to believe that one or more of the broker-dealer’s assertions regarding the claimed exemption provision were not fairly stated.” The problem areas point to cut corners: Firms often did not obtain sufficient understanding of exemption provisions and did not make related inquiries.

“Firms should also take into account evidence from financial statement audits, including evidence that appears to contradict assertions made in exemption reports, when planning, performing, and evaluating the results of review engagements,” the PCAOB advised.

Finally, the PCAOB reviewed financial statement audits, which were broken down into a list of nine key audit areas. Among those with the highest rates of deficiency in 2019 were consideration of an entity’s ability to continue as a going concern (67 percent), revenue (53 percent), and post-audit matters (43 percent).

“We believe that obtaining a sufficient understanding of internal control over financial reporting, and other risk assessment procedures, will help firms clearly identify and assess the risks of material misstatement in these areas, and prevent deficiencies from occurring in these areas of the audit,” said the PCAOB. 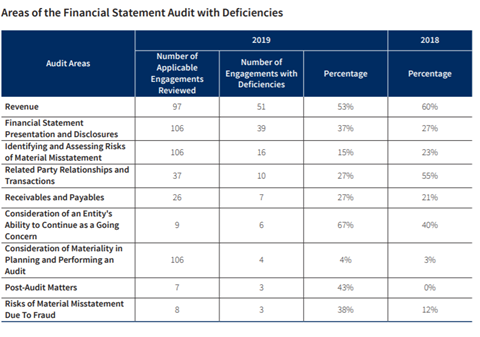 Other areas covered in the report include deficiencies in auditor communication, documentation, and independence. The PCAOB suggests the information might be considered helpful to share when firms engage with management and audit committees at the broker-dealers they inspect.