Implementation and testing of risk-based processes and the data analysis that sits behind them are among the biggest weaknesses laid out in a review of anti-money laundering (AML) efforts in the accounting and legal sectors conducted by a division of the U.K.’s financial watchdog.

The Office for Professional Body Anti-Money Laundering Supervision (OPBAS) was established as part of the Financial Conduct Authority in 2018. The new regulator oversees the AML efforts of the 22 Professional Body Supervisors (PBSs) responsible for AML supervision for the accounting and legal sectors in the United Kingdom.

OPBAS released its 2020 report this month, which covers progress and themes from 2019. The report highlights how AML supervision evolved in 2019 relative to 2018.

“PBSs have responded differently to the challenges they face,” the report states. “Some have responded positively and implemented changes quickly. Others have been less proactive in their approach. We have delivered tough messages and used our regulatory powers where necessary.”

In the report covering 2018, 91 percent of the relevant PBSs were not fully applying the risk-based approach. That number is now down to 14 percent as of the end of 2019, though OPBAS intends to have the stragglers in line early this year.

“Of this 14%, all have plans to implement risk-based supervision in early 2020, although in some cases this has required us to issue directions under the OPBAS regulations to achieve this,” the report states. 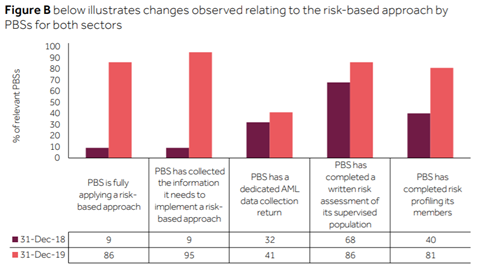 OPBAS notes testing the effectiveness of PBSs’ risk-based approaches will be its focus this year.

Further, OPBAS found only 41 percent of relevant PBSs had a dedicated AML data collection return in order to glean quality data to inform their risk-based approaches. The number is an improvement on the 32 percent noted at the end of 2018, though OPBAS has held workshops in an effort to preach the benefits of greater attention to this practice.

Further, all accountancy PBSs had adequate conflict of interest policies in place by the end of 2019, compared to only 23 percent meeting the criteria the year prior. 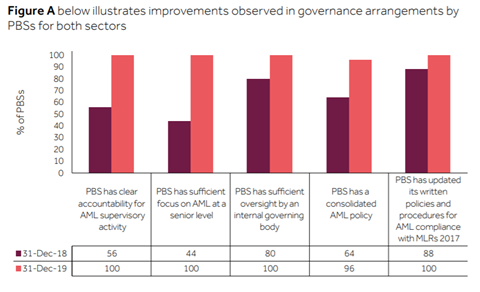 Other areas covered in the report include the following: