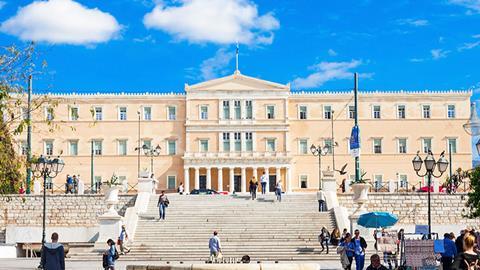 Angelos Binis has served as a policy analyst for the Organization for Economic Cooperation and Development (OECD) since September 2015. According to his LinkedIn profile, Binis describes his job function at the OECD as “working for the Public Sector Integrity Division focusing on internal control, integrity, and anti-corruption.”

Prior to the OECD, Binis served six years with Greece’s Inspectors-Controllers Body for Public Administration (ICBPA), where he last served as head inspector. According to the authority’s Website, the ICBPA is not an independent authority. “However, it is endowed with administrative and operational independence,” the Website states.

Since December 2002, the ICBPA has been operating under the provisions of Law 3074/02 that expanded its powers and the scope of its intervention. Law 3074/02 provides that the agency shall exercise its powers to contribute to “the efficient and effective operation of public administration and, especially, to step up the fight against corruption, maladministration, ineffectiveness, low productivity, and low quality of the services rendered by the public organizations.”

An article authored by Binis last year provides some of his thoughts on addressing anti-corruption matters. In that article, Binis makes the case that “technical assistance projects need to carefully consider the needs and the characteristics of national public governance, control, and oversight arrangements to avoid the implementation gap.” Binis describes the “implementation gap” as “the risk of confining ourselves to a mere reproduction of theoretical frameworks that have little chance of being integrated into the systems of decision making, administration, and operation of public bodies.”

Binis also noted few public companies in Greece currently have a “substantial risk management function” that follows the three lines of defense model. “Also, although most services have physical security features, few services have advanced network, computer and data security features,” Binis wrote, which is a “very topical issue” due to the entry into force of the EU General Data Protection Regulation, he noted.

Binis also said internal audit activity in public administration, similarly, is “not in line with good international practice and needs to be revised.” The coordinated efforts of multiple bodies—including the Institute of Internal Auditors and the OECD—are looking to “develop and implement these policies. functions and processes in the systems of governance and operation of the Greek public administration,” he wrote.

He pointed to the need for greater collaboration between and among other state administrations, as well as the private sector: “The technical challenges of these projects and the inherent difficulties of the implementation and management phase of change require … synergies and exploitation of all available, capable, and willing forces.”

Binis’ appointment was first reported by the Greek City Times.