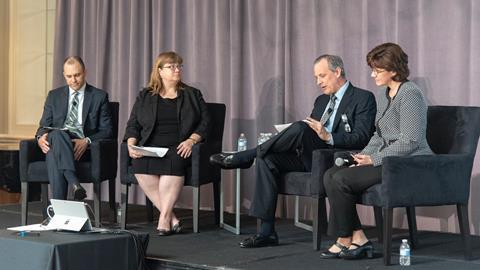 The Securities and Exchange Commission has stuck to its promise to focus on initiatives that improve capital formation and lighten the regulatory burden, but that doesn’t mean the regulator is letting up on its mission to protect investors.

Since his first appearance as part of the nominating process to become chairman at the SEC, Jay Clayton has focused on capital formation, said Mark Miskinis, a partner at Deloitte, during a panel discussion at Compliance Week’s recent annual conference. “The goal is to make it easier to be a public company,” he said. “They are trying to find ways to do that without negatively impacting investor protection.”

The SEC has been “incredibly active” in making new rules, said Miskinis, and many but not all of the new rules have been driven by the capital formation objective. “They are trying to make it easier to do business with the SEC, although not everything has gone in that direction,” he said.

“From our perspective, investors certainly aren’t going to want less information or less frequent information. I have a full-on expectation that we’ll continue to report on a quarterly basis. None of that is going to change.”

Changes in interim reporting, for example, are under consideration at the SEC after President Trump famously tweeted a call for reduced frequency in regulatory filings. Even before Trump chirped about the idea as a way of reducing excessive focus on short-term objectives, the SEC was already exploring it, said Miskinis.

The SEC issued a request for public comment in late 2018 on how reporting can be improved or at least maintained for the benefit of investors while reducing the burden on companies. The SEC asks for input on the nature and timing of disclosures that companies provide in quarterly Form 10-Q filings and how that interacts with earnings releases that companies issue.

The SEC is exploring “why the market moves so much on the press release but doesn’t move much at all on the Q,” said Miskinis. So far, roughly 70 individuals or entities have weighed in on the request, he said.

“Investor groups are saying we absolutely need quarterly reporting,” said Miskinis. “On the company side, there’s a little more diversity, especially among smaller companies that are looking for relief.”

Greg Wright, vice president and technical controller at Comcast Corp., said he respects the SEC’s consideration of the issues, but he doesn’t expect his reporting structure to change. Comcast is a large accelerated filer, and the reporting process is a significant undertaking, he said.

“From our perspective, investors certainly aren’t going to want less information or less frequent information,” Wright said. “I have a full-on expectation that we’ll continue to report on a quarterly basis. None of that is going to change.”

If relief is in the offing for larger companies, it’s more likely to come through a separate SEC initiative around disclosure simplification, said Wright. Especially where disclosure requirements compel companies to provide information that’s not as important to investors. “That’s a great dialogue that should be had,” he said.

Comcast has applied a concept of materiality to its disclosure determinations, said Wright, even ahead of any SEC rulemaking to definitively alter requirements. After Comcast’s recent acquisition of British broadcaster Sky, it created a consolidated “quarter trillion dollar balance sheet,” he said. “From a materiality standpoint, there aren’t many things that get material to us.”

That makes it feasible to reconsider, for example, pension disclosures. The company has “a handful” of pensions, and most of them are frozen, said Wright. As such, when viewing disclosures through a lens of materiality, the company felt it appropriate to scale back some of the actuarial details, he said.

To the extent the SEC can support such determinations, and give auditors comfort in supporting them as well, that will reduce the load of disclosure requirements, said Wright. “It’s a big balancing act to make sure the disclosures and documents are concise and pointed to the things that matter,” he said.

More recently, the SEC also proposed revising the tests for determining the significance of a business acquisition, which affects the scope of information and depth of detail that must be disclosed to investors. The SEC’s proposed changes will have the effect of reducing the frequency of “anomalous answers” that emerge with current significance testing, said Miskinis. Those are instances where test results would suggest an acquisition was significant when common sense would suggest otherwise, he said.

While the rulemaking process on significance testing continues, companies in the meantime have been encouraged to ask the SEC for waivers of the reporting requirements under Rule 3-13 of Regulation S-X, said Miskinis. The SEC “has been very receptive” to such requests, he said, being open to a dialogue on how to assure reporting is not overly burdensome. It usually involves a fair amount of back-and-forth written correspondence “to get to the answer that makes sense,” Miskinis said, but the SEC has provided a number of waivers under the process.

In the proxy area, the SEC has been active primarily in three sectors—proxy solicitation and voting, the shareholder proposal process, and the role of proxy advisory firms, said Consuelo Hitchcock, principal at Deloitte in audit regulatory affairs.

With respect to solicitation and voting, “there’s a fairly broad consensus there’s a better way to make this process easier,” said Hitchcock. The use of blockchain, or distributed ledger technology, has been raised as a possible solution, but that’s a longer-term possibility, she said. The SEC has said it is especially concerned about the lower rate of retail investor participation in proxy voting and whether that skews outcomes.

The SEC is also concerned about whether proxy advisory firms have too much influence over the proxy process, and perhaps whether there’s even a conflict of interest that needs to be explored and addressed, said Hitchcock.