3
‘You have to say the corny stuff’: A compliance conversation with Preet Bharara 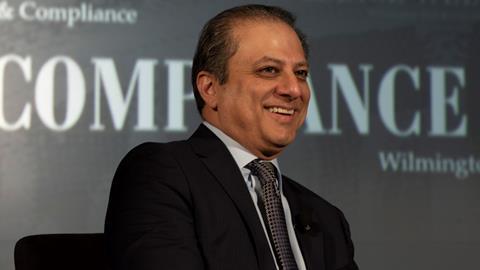 ‘You have to say the corny stuff’: A compliance conversation with Preet Bharara

During his keynote Q&A at Compliance Week 2019, Preet Bharara spoke with wit and wisdom about his time with the Department of Justice and what principles he learned along the way that all general counsel and chief compliance officers can apply in their own day-to-day jobs.

Bharara served as U.S. attorney for the Southern District of New York from 2009-2017, when he was fired by President Donald Trump. Now a law professor, published author, and host of the popular podcast, “Stay Tuned with Preet,” Bharara quipped, “I don’t have to wear a tie quite so often.”

“People don’t mention it in the introduction because they think they’re being polite. But I was fired—and I’m not unproud of that, by the way,” he said, prompting laughter from the audience.

On a more serious note, among the many topics Bharara discussed included the importance of building rapport during investigations; how to foster ethical values; and how to be both a great listener and a great communicator when building a culture of compliance—all lessons that directly apply to general counsel and compliance officers.

Scare tactics don’t always work. Whether you are a prosecutor, a general counsel, a chief compliance officer, or a senior manager of a company, “people will talk to you if they feel comfortable with you, not necessarily because they’re afraid of you,” Bharara said.

It’s more important to build rapport on a personal level. “Sometimes even from bad people, you can get good information if you do it in a way that is gentle,” Bharara said.

It’s more about leadership and less about the law. Principles of leadership are the same no matter the industry or the company. Two of the most important principles, Bharara said, are continuity and change, with continuity meaning “continuity of values; continuity of principles; continuity of excellence—making sure integrity is at the top of things you care about, but then also change,” he said. And that means, for example, “maybe you place less emphasis on organized crime, because that threat has subsided a little bit, and more emphasis on cyber threats, which has increased a lot.”

Continually reinforce the principles of the company. Bharara used the analogy of a relationship. “If the first time is the last time you say, ‘I love you’ to your partner, that’s not going to be a successful relationship,” he said. “In the same way, at organizations, you have to say the corny stuff: ‘We don’t lie. We don’t cheat. We don’t steal.’ Whatever those principles are, you have to say them all the time. That’s important.”

You have to listen. One of the ways to do your job effectively is to rely on other people, particularly those who are smarter than you. Also, you have to be comfortable with constructive criticism and receptive to change, Bharara said.

It boils down to culture. “You have to have a culture, in whatever institution you’re at, where people feel comfortable coming forward, where people feel comfortable reexamining things,” Bharara said. “What I liked to do was, when other people make bad decisions in other offices, I would say, ‘How do we make sure that this terrible thing doesn’t happen to us?’ It’s a lot more fun to learn from other people’s mistakes than from your own.”

Don’t be afraid to ask the “dumb” questions. “The only way you can understand something deeply … you need to be able to ask questions, to have people be patient with you at the elemental level,” Bharara said. On the flip side, sometimes you have to explain things to people like they are children. “That’s how you’re supposed to talk to people who are not experts in your field,” he said. “Even to very smart people, you have to break it down.”

Don’t walk the line. Some companies have a “culture of minimalism,” Bharara said, “where people want to do only the bare minimum to be compliant with the law, right up to the line, without going over.” The danger of that mindset is that you run the risk of getting into trouble.

“Different companies have a different level of sensitivity to investigations and prosecutions. Some companies can withstand an investigation, a charge, or even a conviction and still do fine because of the nature of the business,” he said. But for other companies—such as pharmaceutical companies or government contractors—the business risk can be far worse. “The fundamental point is, if you happen to be in a business where your business model is especially sensitive to a criminal investigation, then it is on you to be especially careful and especially good not to throw up smoke.”