The date was Feb. 20, 2020. The novel coronavirus had its tentacles burrowed deep in China. It was now extending its reach in dribs and drabs to Southeast Asia, Europe, Australia, Canada, and the United States. The World Health Organization (WHO)’s Situation Report recorded 75,748 total cases globally on this day, 98 percent of which were in China. WHO called it an epidemic: the outbreak of a rapidly spreading disease. Global surveillance was underway, but the virus did not yet rise to the level of pandemic: a disease all over the world.

While the western world monitored the virus’s spread with detached concern, unaware of how profoundly their lives would change in a few short weeks, global cruise line operator Carnival Corporation was already knee-deep in the virus’s warpath, a swelling cluster of COVID-19 cases having manifested aboard one of its vessels. More surges of cases aboard ships on other cruise lines would soon follow, as well as some of Carnival’s other floating cities. 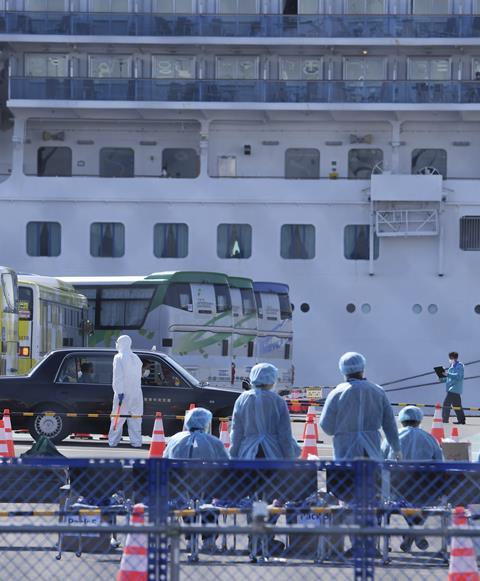 Passengers who tested negative for COVID-19 disembark from the Diamond Princess in Yokohama, Japan, on Feb. 21.

In late January, Carnival’s Diamond Princess set sail on a two-week, round-trip itinerary on the South Pacific. Five days into the voyage, a guest disembarked in Hong Kong and tested positive for the virus. Soon, 10 passengers aboard the vessel were diagnosed with COVID-19. By Feb. 4, the ship began quarantine in Japanese waters off the port of Yokohama (Tokyo) with 3,711 people on board. By Feb. 19, four or five people were being infected by the hour.

There were 542 cases of the virus identified on the ship that week, making it the site of the most infections outside of China at that time. Feb. 20 also happened to be the day the Japanese Ministry of Health cleared the first 600 healthy guests for disembarkation. Jan Swartz, Carnival’s president of Princess Cruises, traveled across the globe to be present to greet the passengers in the Yokohama cruise terminal personally.

All this was happening 7,467 miles away from Carnival’s headquarters in Miami, where Compliance Week was touring the company’s new Ethics and Compliance (E&C) department.

Carnival did not have a centralized E&C department prior to August 2019. Historically, the compliance functions of the organization—from general compliance to environmental to health, safety, and security—worked independently within the corporation’s four operating companies. It wasn’t until Carnival hit troubled waters, both internally and publicly, that the company endeavored to build stronger lines of communication, consistency, and cohesion across its globally focused compliance program.

“I really believe that in the next two to three years, we will emerge as having created the premier ethics and compliance program, not just in the cruise space but in comparison with any global corporation more broadly. And our progress comes out of the cauldron of a crisis. Often, that is what drives the biggest change.”

Carnival’s checkered past of violating environmental laws was no secret. The company pled guilty in federal court both in 2002 and 2017 to illegally discharging oily waste into the seas and falsifying records of oil-contaminated bilge water to cover its tracks. The first time the transgressions were caught on several ships in the Carnival Cruise Line fleet; the second time it was an insidious issue in the Princess fleet. According to the Department of Justice, the commonalities in widespread, covert misconduct over a 25-year stretch suggested the company harbored a systemic problem of ethics and culture that was never properly rooted out.

It was an overhaul that would take time, teamwork, patience, commitment, and a good amount of ingenuity. The newly minted E&C department was tasked with uniting the operating companies’ compliance functions, developing trust and rapport with shipboard and shoreside personnel, reinventing the company’s ethical culture, and last but certainly not least, abiding by a court-mandated and supervised five-year environmental compliance plan (ECP) that included a court-appointed monitor (CAM).

The terms stipulated by the ECP were a tall order. Peter Anderson, the new chief ethics and compliance officer (CECO) and a former federal prosecutor, was confident he could turn Carnival’s compliance woes around.

“I really believe that in the next two to three years, we will emerge as having created the premier ethics and compliance program, not just in the cruise space but in comparison with any global corporation more broadly. And our progress comes out of the cauldron of a crisis. Often, that is what drives the biggest change,” Anderson told Compliance Week in December 2019.

Although Carnival’s dealings with the coronavirus were not the primary focus of Compliance Week’s visit, inevitably the subject came up. How could it not, when one of the company’s cruise ships was quickly becoming a mini epicenter—and alleged agent—of the virus’s spread? The media was following the Diamond Princess story closely. Dr. Anthony Fauci, director of the National Institute of Allergy and Infectious Diseases at the National Institute of Health, called attention to the ship on Feb. 18, saying, “you amplify [the virus’s high transmissibility] when you put it in a closed space.”

“You couldn’t ask for a better incubator for infection,” Fauci added, referring to Diamond Princess. 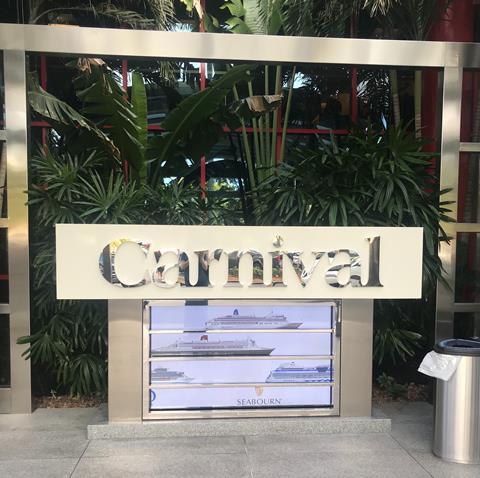 Carnival Corp’s front entrance, as it appeared on Compliance Week’s visit in February.

All eyes were on the cruise line operator, and the person on the E&C leadership team who could speak to the matter best was Gerry Ellis, vice president and health, safety, and security corporate compliance manager.

Did the coronavirus’s impact on Diamond Princess constitute a compliance issue?

“It’s not necessarily compliance on its own, but it is compliance with the regulatory aspect of health that we’re having to deal with, and that’s a shifting battlefield at the moment,” Ellis said. “There are lots of contradictory requirements depending on which country we’re talking to right now, being a global organization. … Knowing what regulatory requirements the company has to comply with and what we don’t is a bit of a quicksand.”

The more one struggles against quicksand, the more it sucks them in; the more Carnival abided by one country’s regulatory health requirements, the greater the chance the company was at odds with another’s.

And then there was the added consideration that, like the virus itself, knowledge about the coronavirus was shifting and growing every day.

Emerging information about its modalities of transmission would introduce new regulatory requirements as well. Everything was changing at such a breakneck pace, and the virus was moving with such aggression, that it would be conceivable for anyone in Ellis’ s position to throw up his hands and get sucked under the sand. Not that he did.

But the real question for E&C was: Would the company’s brand-new compliance program be forced to take a back seat to the coronavirus, or would it be called upon to take the wheel in this crisis?

Anderson, the department’s CECO, had succeeded at getting E&C a seat at the leadership table. The department was receiving the financial backing it needed from the organization as well as the attention of the C-suite and boards of directors to flourish under Anderson’s leadership. A corporate ethics and compliance charter had been drafted. A strategic plan had been meticulously calibrated and fine-combed by compliance leaders at both corporate headquarters and the operating companies. All E&C needed now was time to move the mountain. The terms of the environmental compliance plan (ECP) had their stresses—additional audits, unannounced visits from a court-appointed monitor, a $10 million per day penalty for any missed court deadlines—but they seemed manageable now, with the compliance functions harmonized and Anderson, with his prosecutorial acumen, at the helm.

But would the coronavirus throw a wrench in the plan and disrupt Carnival’s commitment to upholding the court-mandated ECP?

“Nothing has taken a back seat because of coronavirus,” Sandy Rowlett, former leader of Carnival’s Incident Analysis Group, said at the time. “That’s the bottom line, really.”

That was Feb. 20—before the whole world went on tilt. Only time would tell whether Rowlett’s statement would hold up.