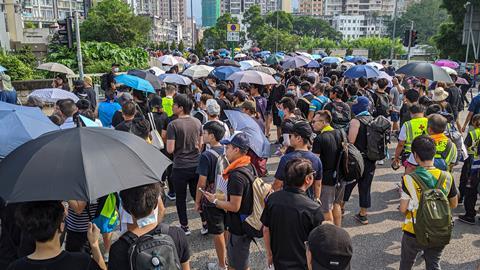 The head of Cathay Pacific has quit after the airline’s initial position that it would not penalize employees for taking part in the Hong Kong pro-democracy protests caused outrage in China and resulted in firms and customers boycotting the company.

Rupert Hogg, the company’s British chief executive, and Paul Loo, its chief customer and commercial officer, tendered their resignations to the board on Aug. 16, four days after Hogg threatened staff with dismissal for supporting or participating in “illegal protests” in an e-mail that has since been widely circulated in the press and on social media.

The airline, a long-term partner of British Airways and others in the One World alliance, initially refused to censure any of its 27,000 employees for taking part in the pro-democracy protests after one of its pilots was arrested in July. John Slosar, chairman of Cathay Pacific, went so far as to say that he “certainly wouldn’t dream of telling staff what to think.”

But that all changed as the political pressure from Chinese authorities mounted and the protests moved to the main terminal of Cathay’s home hub, Hong Kong international airport, which resulted in a halt to all passenger travel and the eventual cancellation of more than 200 flights for the airline.

Added to that, the company’s financial fortunes have been further dented in recent weeks by banks downgrading its investment rating, as well as by a boycott by several Chinese firms that have told their staff not to fly with Cathay for “safety reasons.”

More than a fifth of Cathay’s flights go to the Chinese mainland. Air China, one of the country’s main airlines and its flag carrier, owns a 30 percent stake of the company.

In an effort to take control that has since spectacularly backfired, on Aug. 12 Hogg changed tack and e-mailed staff to say the airline had “a zero-tolerance approach to illegal activities” and that they could be fired if they supported or participated in the “illegal” protests.

The company also acceded to the Chinese aviation regulator’s request to submit the names of its crews for checks before flying over the mainland and dismissed a number of its “overly radical” employees (two workers have been fired and one pilot has been suspended). It has also agreed to submit a report on planned measures to “strengthen internal control and improve flight safety and security.”

In his e-mail to staff, seen by the BBC and other media outlets, Hogg wrote: “We are legally required to follow Civil Aviation Administration of China (CAAC) regulations and, as is the case with any notices issued by any regulatory authority having jurisdiction over us, we must and will comply.”

Cathay Pacific cabin crew took to social media to communicate with each other about the Chinese authorities’ crackdown, using closed WhatsApp and Facebook groups to share information.

One message seen by the BBC said crews flying into China were now liable to have their phones checked and data read by “safety officers.” It advised crew members to leave their usual devices at home.

In his resignation statement, Hogg said that “these have been challenging weeks for the airline, and it is right that Paul and I take responsibility as leaders of the company.”

Commenting on the change of management, Loizos Heracleous, professor of strategy at Warwick Business School in the United Kingdom, called Hogg and Loo “sacrificial lambs” who resigned “in the service of bigger interests than any single individual—in this case the brand, market value, and the prosperity of Cathay Pacific.”

In a statement, Slosar said that “recent events have called into question Cathay Pacific’s commitment to flight safety and security and put our reputation and brand under pressure. This is regrettable as we have always made safety and security our highest priority … We therefore think it is time to put a new management team in place who can reset confidence and lead the airline to new heights. Cathay Pacific is fully committed to Hong Kong under the principle of ‘One Country Two Systems’ as enshrined in the Basic Law. We are confident that Hong Kong will have a great future.”

Augustus Tang has taken over as CEO, while Ronald Lam has been appointed as the new chief customer and commercial officer. Slosar and the rest of the board hope they will be “strong and effective leaders of Cathay Pacific at this sensitive time.”

The mass protests in Hong Kong began on June 9 in response to a proposed extradition bill between the territory and mainland China, but these demonstrations have since evolved into demands for greater freedoms generally.

Hong Kong is part of China, but its citizens have more autonomy than those on the mainland under the so-called “one country, two systems” approach. Activists fear these freedoms are being increasingly eroded.