Perhaps it was obvious from the very beginning that David Huntley is the kind of guy who has a passion for doing the right thing, and he’s not afraid to stand up for it.

“We have to be the ones who see the value proposition in what we do,” says Huntley, who is senior executive vice president and chief compliance officer at AT&T, Inc. “We can’t leave that to others to dictate. We must have this unshakable conviction to do what we do. We are the examples.”

As a sophomore at Southern Methodist University in the late 1970s, Huntley was elected student body president as a write-in candidate. He was the first African American student to hold that position, and he soon became the student voice for underserved student populations in the state of Texas. He spent some time in the workforce, then attended law school at Cardozo School of Law at Yeshiva University, where he became a standout in moot court.

After graduating in 1990, Huntley began his career at AT&T with aspirations of climbing the corporate ladder through the legal department. He practiced law there for about 10 years, he says, until someone suggested he broaden his horizons and consider additional business leadership opportunities. 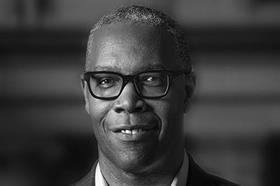 About AT&T:  AT&T is one of the world’s largest communications and digital entertainment services company.

Quote: “Why wait for something bad to happen to put an investment into a robust compliance program? Why not get ahead of it and put things in place on the front end?”

“That wasn’t really my game plan,” says Huntley. “I thought I wanted to rise and achieve within the legal department.” But he answered the call and switched to the operational side of the business in 2005, assuming responsibility for leading the company’s customer information services.

Additional assignments in e-commerce, sales, and mobility services would give Huntley a variety of operational experience that would eventually shape his views on legal and compliance matters. “It gave me a different perspective,” he says. “I had several different operational roles, a sales function at some point, and some P&L responsibility. All of that was very different. I had to reinvent myself to do those kinds of things.”

Eventually, Huntley would find his way back to the legal department as a senior officer of the company. He served nearly two years as senior vice president, general counsel, and secretary for AT&T’s Advertising Solutions, then a more than $3 billion business, leading a team of attorneys and managers across five locations.

Then in 2014, AT&T CEO Randall Stephenson tapped Huntley for his current position, a senior leadership role in the company positioning compliance to report directly to the CEO. “I really didn’t have compliance on my radar,” says Huntley. “This role found me, as opposed to me seeking it.”

The job was appealing in part because of the direct line to the CEO and the board. The trend is growing, but not every company puts its compliance officer in such a high-ranking, independent place in the organizational structure. “They saw a need to have compliance be independent from other organizations and have an independent seat at the table,” says Huntley. “It factored into the equation.”

With no prior direct experience in corporate compliance, Huntley drew on his legal and business background to determine how best to drive compliance in a massive, multinational operation. His operational experience in particular proved significant in shaping how he would go about compliance, he says.

“Knowing what pressures and challenges people who are in operational roles face probably gave me a greater appreciation for how I’d want to go about doing this business of compliance for the company,” says Huntley. “I have insights into those things. I know where people might be tempted to cut corners.”

He also did some research to understand what best practices were emerging in compliance. “When I took this job, I thought what do the best programs look like? And I went on a mission to find them,” says Huntley.

What he found among the most unique programs is that they generally arose to address a problem. Companies doing some of the most innovative things in compliance tend to be those that are trying to recover from some kind of mishap, he says. “We wanted to be sure we didn’t let ourselves fall along those lines,” he says. “Why wait for something bad to happen to put an investment into a robust compliance program? Why not get ahead of it and put things in place on the front end?”

Investment and innovation still must be efficient and effective, he says. As Huntley looked for ways to revamp the compliance effort, he and his team were able to identify opportunities to use technology, like bots, for example, to automate certain manual, repetitive tasks.

In his few short years in the position, Huntley has sought to make compliance a more dynamic, top-of-mind aspect of doing business at AT&T. He’s looking for ways to remake compliance training so that key messages about doing the right thing are continually refreshed among employees.

As an example, Huntley says, AT&T has retooled and rebranded its compliance training, calling it Ethics@Work. It consists of elements of traditional in-person and online training, but it has expanded to include more interactive elements, plus tools and mobile-enabled Websites that are meant to be accessed and used on a continual basis.

The company’s code of conduct, for example, was a document like many that explained what employees were expected to do and how they were expected to act as representatives or ambassadors of the company, but it was a relatively static document brought out for training and then tucked away. Huntley says he and his group wanted the document to be more dynamic, more front-and-center with employees on an ongoing basis.

So the code of conduct was made accessible to employees on desktop and mobile devices, and it sports an interactive feature in the form of a decision tree. When employees find themselves in a gray area of compliance, facing some kind of uncertainty about how to act or respond, they can access the code of conduct for immediate guidance.

Employees queried the code of conduct nearly 100,000 times in the first year, says Huntley. The most common questions surrounded areas like gifts and entertainment, conflicts of interest, and how to report misconduct.

“We felt good about putting something in the hands of employees that they could use on an ongoing basis, not just something they would see once a year,” he says. “It’s about making sure people have the tools and the license to figure it out and do the right thing.”

In another innovative program, AT&T came up with a tool that helps employees in the area of third-party management and vendor management. “We put it into the hands of vendor managers and it helps them better manage their relationships with third parties and vendors that are so vital to our business,” says Huntley. “We are trying to get ahead of problems instead of just reacting to them,” he says.

A fan of big screen entertainment, Huntley enjoys going to theaters to see movies, which inspired another compliance initiative—“At the Movies with David.” It uses movie clips to drive discussions on leadership, ethics, and integrity. In a user feedback survey, this idea received an unprecedented 99 percent approval rating.

A recent event revolved around scenes from “The Devil Wears Prada,” a 2006 film that starred Anne Hathaway and Meryl Streep. Hathaway portrays a promising young graduate who lands an opportunity as an assistant to Streep’s character, a demanding editor of a fashion magazine. To describe the fictional work environment portrayed in the film as dysfunctional is something of an understatement.

“It’s a movie that tells a lot about leadership and culture,” says Huntley. “You see the dynamic when someone puts high goals or requirements on employees—how, without saying it, it can cause people to do the wrong thing.”

The movie clips often prove to be great discussion starters, he says. “It isn’t about me getting up and talking about it,” he says. “It opens a dialogue on some of these issues, and the employees do most of the talking.”

When it comes to conveying ongoing compliance messages, they are often presented to employees almost like advertising taglines—catchy and easy to spot. “We want the messages we put out to resonate with employees,” says Huntley. “We wanted messages that were simple, yet effective, like ‘We don’t buy business and we can’t be bought.’ ” It’s posted in elevators and on banners placed in prominent locations.

“We had another campaign around: Just do the right thing,” he says. “It encapsulates everything we wanted employees to think about. We want people to feel it’s their responsibility to do this.”

For this year, his organization’s mission at AT&T is to demonstrate the power of integrity as a competitive advantage. “My organization’s role is to support the business units when it comes to integrity,” he says. “The power of what that brings to the table.”

The initiative begins with a focus on tone at the top, says Huntley — “making sure we demonstrate at the leadership level just how important this commitment to integrity and doing the right thing is.” The initiative provides business units with data and evidence to show a link between integrity and business success.

The idea is to impress upon employees that having an ethical culture and acting with integrity goes beyond checking a box on a list of compliance tasks or activities. “It’s about demonstrating the value proposition to the organization about ethical practices and how that helps move the needle in a positive way, not just preventing bad things from happening,” says Huntley.

It has taken some effort to cut through the common perception of compliance as the “police” within the organization, says Huntley, merely waving checklists of tasks that must be achieved in order to demonstrate a positive business environment.

“One of the things we want people to understand is yes, there’s enforcement and we’re verifying compliance,” he says. “That’s one of the most important aspects of our job.”

But for Huntley it goes well beyond setting the floor on a minimum expected standard of behavior or performance. “I wanted to make sure people understood how connected the compliance efforts were to the brand, the reputation, and the results,” he says.

That’s a big reason for presenting messages with data and evidence attached. “When you’re talking to business unit leaders, it helps them understand why doing things the right way is good for business, not just from a preventive standpoint but moving the needle in a positive way,” he says.

One of the reasons Huntley believes he’s been able to be successful in his role at AT&T thus far is his position within the organization reporting to the CEO and the board directly. “We’ve seen the prominence of the compliance profession growing,” he says. “It starts with having a seat at the table, making sure I add value at all times.”

When he’s not thinking about compliance at AT&T, Huntley enjoys spending time with his family—a wife and two grown sons—and he enjoys reading and watching movies. He likes keeping up with the legal profession and mentoring young professionals—and then he draws quickly back to thoughts of compliance.

“I get on the stump about compliance and ethics whenever I can,” he says. “You just have to pick up a newspaper and see some company is in the news to know how important this is. Your ethical culture is such a driver of what you do. We have to be the ones at the forefront.”