ESG at the vanguard of company objectives in 2020

According to the latest research, 2020 may be the year when companies finally embrace sustainability as an opportunity rather than a burden.

Saving the planet from climate change? Leave that for the protesters. How about satisfying your investors, your employees, and your customers?

“Companies really don’t have a choice anymore, and some are starting to see the benefits and potential profits” from pursuing sustainability, said Andrew Winston, corporate sustainability advisor and best-selling author of books like “Green to Gold” and “The Big Pivot.”

Companies are coming to recognize that reducing their carbon footprint can cut costs and wring out inefficiencies, he said. They are also finding that green energy sources like wind and solar have become competitively priced compared against traditional carbon-based sources.

Consumers and employee activists are succeeding in pushing companies into adopting ESG practices, as can investors, said Josh Zimmer, CEO of the Interfaith Center on Corporate Responsibility, a shareholder advocacy group.

“Smart companies understand that they are getting out ahead of risk, by focusing on the impact of their practices, especially on forward-facing brands,” he said. “The risks of using forced labor, or dumping pesticides in the river, are problematic on a number of fronts. It’s not only the legal risks, but the reputational risks.” 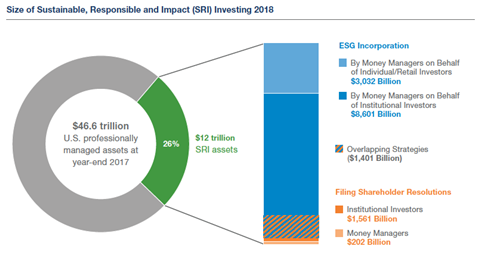 Large companies and investors are taking note. A few examples:

“There’s plenty of companies that are using sustainability to reduce risk or build their brand, building loyalty among employees and investors in the process,” Winston said. For many companies, the value of their brand, an intangible asset, is often more valuable than everything else put together. Pursuing sustainability in decision making makes good business sense if it also increases and protects the value of the brand, he said.

In fact, investments in ESG companies ballooned to nearly $12 trillion in 2018, according to the U.S. Forum for Sustainable and Responsible Investment.

And the reverse is happening with companies that can’t or won’t pursue an ESG initiative for a variety of reasons. Coal-related stocks have taken the biggest hit, with large European funds recently announcing the sale of their stakes in coal mining companies, according to a recent story in the Wall Street Journal. BlackRock indicated it will sell its shares in coal-producing companies by the end of the year. Indeed, the company has announced a number of climate change initiatives, according to a recent Compliance Week article.