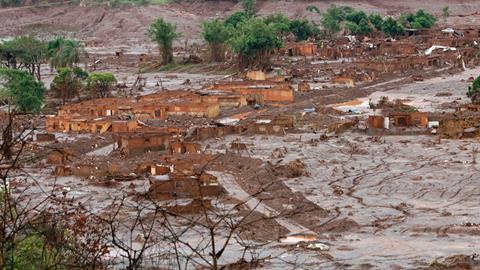 BHP, the world’s largest mining company, “knew of the risks” surrounding the deteriorating condition of a Brazilian dam years before its collapse in 2015 and was “woefully negligent” in its duty to prevent the catastrophe, say lawyers representing thousands of claimants in a $5 billion damages action.

The Fundão dam near Belo Horizonte in eastern Brazil collapsed on Nov. 5, 2015, causing a mudslide that killed 19 people, displaced at least 700 more, and destroyed the nearby villages of Bento Rodrigues, Paracatu de Baixo, and Gesteira. It also devastated the Rio Doce river basin, polluting the country’s second-largest river system.

The dam was used to store up to 55 million cubic metres of iron ore tailings—a toxic industrial waste product—from the mining operations of Samarco Mineração, a 50/50 joint venture between BHP and Brazilian miner, Vale.

The incident is regarded as the worst environmental disaster in Brazilian history.

U.S.-U.K. law firm SPG Law filed a group action lawsuit against the Anglo-Australian mining conglomerate at the High Court in Liverpool, England, last week on behalf of 235,000 Brazilian individuals and organisations, including 25 municipal governments, utility companies, members of the Krenak indigenous community, and the Roman Catholic Archdiocese of Mariana.

It is the largest group action in U.K. legal history, both in terms of number of claimants and damages sought.

As BHP’s holding company is registered in England, legal proceedings can be brought in an English court, where the case is likely to be handled speedier than in Brazil. However, the claim is being brought under Brazilian law, whose legislation regarding environmental liability has a “long reach” and provides for a number of different ways of strictly holding parent companies liable for the acts and omissions of their subsidiaries, including Samarco.

In a statement, Tom Goodhead, partner at SPG Law, said, “BHP was woefully negligent in its duty of care.”

“BHP knew of the risks surrounding the Fundão dam. The repeated warnings and recommendations of dam safety experts were acted upon too slowly or sidestepped entirely,” said Goodhead.

“Driven by concern for declining revenues amidst the falling market price of iron ore, the company took risks, increased production and turned a blind eye to dangers that ultimately claimed lives and destroyed communities,” he added.

In a statement, BHP says it intends to defend the legal action.

The group action suit describes in detail a series of failures and errors of judgment over several years leading to the disaster. It says BHP was aware of escalating safety concerns surrounding the dam’s integrity and was knowingly responsible for decision-making around its operation and maintenance but failed to act appropriately.

According to the lawsuit, in the years prior to the collapse, Samarco’s iron ore production was “repeatedly ramped up” by BHP and Vale “to maintain profits in the face of a falling price of iron ore on the world market,” which meant the capacity of the dam had to be repeatedly increased by raising its height. Furthermore, “warnings (including from the engineer responsible for the design of the dam) to BHP and Vale that this posed risks to safety, and that cracks which appeared in the dam were early signs of liquefaction and rupture, were disregarded,” says the court document.

Instead, the companies “continued to press ahead with raising the crest of the dam at the average rate of around a metre a month, and in the last month before the collapse it was raised by nearly three meters.”

This is not the only legal action that either BHP or Vale have faced over their operations and safety records.

Furthermore, the company is still in the process of settling civil claims in Brazil and is making payments to those affected by the tragedy through a foundation set up after the disaster.

Meanwhile, Vale is currently reeling from another disaster after more than 300 people died when a dam burst at its Córrego do Feijão iron ore mine, also in Brazil, on Jan. 25 this year.