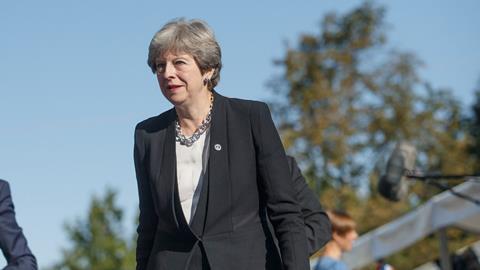 May: Approve my Brexit plan, and I’ll resign

With a bold—but likely inevitable political gambit—U.K. Prime Minister Theresa May has delivered a promise to Members of Parliament: Vote for her Brexit plan, and she will resign.

May made the vow during a meeting with roughly 300 MPs representing the conservative Tory party.

“I know there is a desire for a new approach—and new leadership—in the second phase of the Brexit negotiations, and I won’t stand in the way of that. I know some people are worried that if you vote for the Withdrawal Agreement, I will take that as a mandate to rush on into phase two without the debate we need to have. I won’t. I hear what you are saying,” May told the 1922 Committee, a weekly gathering of backbench Conservative MPs. “I am prepared to leave this job earlier than I intended in order to do what is right for our country and our party. I ask everyone in this room to back the deal, so we can complete our historic duty to deliver on the decision of the British people and leave the European Union with a smooth and orderly exit.”

As expected, May’s announcement was met with hostility from one of her most vocal foes, Labour Party leader Jeremy Corbyn.

He took to Twitter to write: “Theresa May’s pledge to Tory MPs to stand down if they vote for her deal shows once and for all that her chaotic Brexit negotiations have been about party management, not principles or the public interest. A change of government can’t be a Tory stitch-up. The people must decide.”

Theresa May’s pledge to Tory MPs to stand down if they vote for her deal shows once and for all that her chaotic Brexit negotiations have been about party management, not principles or the public interest.

A change of government can't be a Tory stitch-up, the people must decide.

A more agreeable post was crafted by David Mundell, a Conservative Party MP and Secretary of State for Scotland: [The] PM is driven by a sense of duty and public service. Her decision today reflects again her putting the national interest ahead of personal interest. She remains determined to secure our departure from the EU on an orderly basis and will have my full support in doing so.”

May, 62, has served as prime minister since the July 2016 resignation of David Cameron. Her successor will take the lead on future negotiations with the European Union.

When that successor is chosen and steps into the role of chief negotiator with the European Union remains anyone’s guess. Key dates to watch for setting potential timelines include: the original March 29 Brexit deadline; April 18 (the last session of European Parliament), May 22 (the “slow Brexit” separation date that would require the United Kingdom to take part in European Parliament elections on May 23-26); the June 28 G20 Summit in Japan; and July 2 (the first plenary session of the new European Parliament).