NBCUniversal has been fined €14.3 million (U.S. $15.9 million) by the European Commission for restricting traders from selling licensed merchandise within the European Economic Area to territories and customers beyond those allocated to them, marking the latest case in a wider enforcement trend.

Executive Vice President Margrethe Vestager, in charge of competition policy, said the decision makes clear that “brand owners cannot prohibit their non-exclusive licensees from selling in some member states or to certain customers, or from selling online.”

“The Commission will not tolerate restrictions, which undermine the EU single market.”

In June 2017, the European Commission opened an antitrust investigation into certain licensing and distribution practices of NBCUniversal to assess whether it illegally restricted traders from selling licensed merchandise—such as mugs, bags, clothes, shoes, stationery, toys—cross-border and online within the EU Single Market.

NBCUniversal further “obliged licensees to pass on these sales restrictions to their customers, by imposing its licensees not to supply their products to customers who could be selling those outside the licensees’ allocated territories or customer groups,” the Commission stated.

NBCUniversal also “implemented a series of measures as an indirect way to encourage compliance with the sales restrictions,” the EC added. “These measures included carrying out audits and the termination or non-renewal of contracts if licensees did not respect the sales restrictions.” NBCUniversal’s illegal practices lasted more than six years, from January 2013 until September 2019.

This resulted in the Commission granting NBCUniversal a 30 percent fine reduction. “This sort of cooperation is now a well-established process in antitrust cases,” Vestager said. “In the last two years, we’ve adopted 10 decisions involving companies that have cooperated with us.” 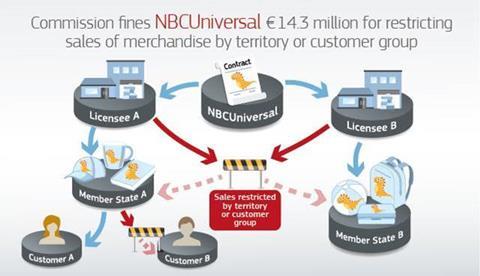 In March 2019, the Commission fined Nike €12.5 million (U.S. $11.3 million) for preventing traders from selling licensed merchandise to other countries within the EEA. In July 2019, the Commission fined Sanrio €6.2 million (U.S. $5.6 million) for restricting cross-border sales of merchandise products featuring Hello Kitty or other characters owned by Sanrio in the EEA.

“These three decisions send a clear message,” Vestager said. “The Commission will not tolerate restrictions, which undermine the EU single market.”

Vestager said the NBCUniversal decision is also important because of how vital the single market is for business, adding that “digitization has made it even easier for consumers to buy—and for businesses to sell—across borders in the European Union.”

“That ought to create opportunities for European businesses, including digital businesses, to grow,” Vestager added. In practice, however, obstacles to sell across borders persists, she said. “That’s why it has been a priority for us to tackle anti-competitive restrictions to online and offline cross-border sales.”

Including the fine against NBCUniversal, total fines imposed on companies for creating barriers to cross-border trade in the single market amount to €184 million ($204 million).