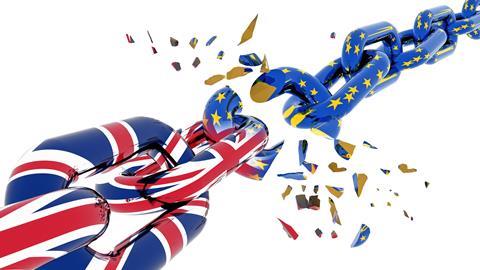 The U.K. government this week released details about the steps it will take to ensure business continues to operate smoothly if the country leaves the European Union on Oct. 31 without a deal.

Just as Germany’s Chancellor Angela Merkel once again told British Prime Minister Boris Johnson an alternative to the EU’s Withdrawal Agreement based on his latest proposals made a new deal “overwhelmingly unlikely,” the U.K. government unveiled a document that catalogs how existing trade arrangements and industries will be impacted by a “no-deal” Brexit.

The 155-page report talks about “grasping opportunities” and putting an end to the “corrosive impact” of 45 years of rule-taking. But in just over three weeks, on Halloween—aptly already a day to celebrate nightmares—hundreds of mutually recognized rules between the United Kingdom and European Union become defunct overnight if a no-deal scenario unfolds.

In the immediate aftermath, the United Kingdom and the European Union would instead trade with each other on World Trade Organization (WTO) terms and customs duties would apply on both imports and exports.

The U.K. government has already set out a Temporary Tariff Regime that would apply to all imports for which it does not have a preferential trading arrangement in place, including from the European Union, for up to 12 months.

To try to make a smooth transition, the U.K. government has decided not to impose new routine checks on goods at the border on Oct. 31, opting mainly to wave a large number of goods through without checks or need for certification (such as products of animal origin, for example). Instead, it would move to new border requirements “over time.”

And in an effort to keep companies operating as easily as possible, the United Kingdom has also said businesses can delay the submission of customs declarations, postpone the payment of customs duties, and postpone value-added tax accounting (though until when is not specified).

The government has also attempted in some circumstances to mirror the EU’s regulatory body or mechanism that is currently in place to ensure there is a simple changeover. For example, the government has developed a new Import of Products, Animals, Food and Feed System to replace the EU’s Trade Control and Export System. Meanwhile, EU airlines will also be able to operate to and from the United Kingdom, mirroring EU measures maintaining rights for U.K. airlines, and there will be similar reciprocal arrangements for road haulers to transport freight.

But despite Johnson’s push to be optimistic about the “exciting opportunity” Brexit affords, the document leaves no doubt a whole raft of regulations and procedures are set to change—and it is the responsibility of businesses across all industry sectors, both in the United Kingdom and the European Union, to know what to do.

Economic forecasters have warned every industry sector will be impacted by Brexit, many of them negatively, in the short term at least. But the services sector—one of the country’s chief cash cows—could be especially badly hit.

Following a no-deal Brexit, companies exporting services—including financial services firms—that have not established a legal entity elsewhere in the EU bloc will not be able to continue to export them into the single market.

And anyone trading or storing data in the European Union faces immediate consequences, too. While the government intends to bring the General Data Protection Regulation that governs data in the European Union into domestic law, the European Commission has made it clear an “adequacy decision” that says the United Kingdom is in sync with EU rules will not be made at the point of exit. As a result, “organizations receiving personal data from the EU/European Economic Area (EEA) need to make alternative legal arrangements,” reads the document, though the U.K. government is continuing to press for the European Union to change its mind and grant it an exemption.

The trading relationship between Ireland, Northern Ireland, and the United Kingdom—which is one of the key sticking points that has frustrated attempts at a deal so far—is another area where detailed plans are lacking.

According to the document, the U.K. government will operate a temporary “no new checks with limited exceptions” policy on the Irish border in the event of no deal. It adds that it will introduce “necessary changes in legislation” before Oct. 31 to apply the new approach—but does not provide details on what these limited exceptions could be. The document also says the United Kingdom will “look to engage with the Irish government and the EU as soon as possible following Brexit.”

Technically, it should be legally impossible for the United Kingdom to leave the European Union without either a deal or without seeking an extension on Oct. 31, but Johnson is adamant Brexit can happen, and then “come what may.”

Since Johnson was forced by Members of Parliament to take “no deal” off the table, it has been suggested the government would only pay “lip service” to the new legislation, and it would deliberately put forward untenable proposals in the full knowledge the European Union would never accept them.

As the Brexit deadline looms, such a strategy has not been lost on EU leaders. While Michel Barnier, the EU’s chief negotiator, has said hopes for a deal still continue, Norbert Röttgen, chair of Germany’s Bundestag Foreign Affairs Committee, tweeted a deal based on the U.K.’s latest proposals had “been unrealistic from the beginning and yet the EU has been willing to engage.”

Good meeting between friends with @simoncoveney and team 🇮🇪🇪🇺Efforts continue to find an agreement with the #UK. pic.twitter.com/LEQCVBzbvp

There is no new #German position on #Brexit. Frankly a #deal on the basis of #Johnson’s proposals until Oct 31 has been unrealistic from the beginning and yet the #EU has been willing to engage. Blaming others for the current situation is not fair play!

President of the European Council Donald Tusk, meanwhile, tweeted: “What’s at stake is not winning some stupid blame game. At stake is the future of Europe and the UK as well as the security and interests of our people. You don’t want a deal, you don’t want an extension, you don’t want to revoke, quo vadis?”