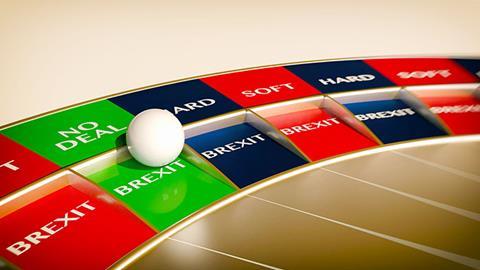 U.K. financial services regulator the Financial Conduct Authority (FCA) has said that it is trying to mitigate as many “cliff-edge risks” as it can as the United Kingdom and European Union stumble on toward a “no deal,” hard Brexit scenario. It admits, however, that “there are some areas that can only be solved by action from the EU.”

In a speech on Monday, 5 November, Nausicaa Delfas, FCA executive director of international, said that while there have been “constructive statements” from the European Securities and Markets Authority (ESMA) and key regulators in France and Germany, “there is more to do” to ensure that financial services operations between the European Union and United Kingdom are not disrupted once Brexit takes place.

Delfas described steps to avoid cliff-edge risks within the United Kingdom to ensure continuity as “unilateral.”

The United Kingdom hopes that an implementation period will be agreed with the European Union, which will ensure that the status quo is maintained after March 2019.

In the meantime, the FCA has put in place contingency plans to ensure there will be a regulatory framework that can kick in immediately, so that firms based in the European Economic Area (EEA) and funds currently passporting into the United Kingdom can continue to operate.

Last month, the FCA unveiled its proposed temporary permissions regime, which will allow EEA firms and investment funds to continue to carry on regulated businesses in the United Kingdom for up to three years while they seek full authorisation if a no-deal Brexit takes place. Firms need to register between January and March next year to be part of the scheme, which so far has seen 1,300 firms express an interest in joining.

And as a way to keep U.K.-EU business flowing in the event of a no-deal scenario, in June the Treasury also recommended giving the FCA the power to make regulatory changes—or waive rules altogether.

In an attempt to calm nerves, as well as assert London’s desire to retain its position as a major financial centre, the FCA insists that even in the event of a no-deal Brexit, firms should plan to maintain business as usual.

“We have made clear to CEOs of large international banks that for their non-EU clients, they should only consider moving activity away from the U.K. if it is demonstrably in the interests of the client to do so,” said Delfas.

The FCA wants to maintain an “orderly” transition and says that “many of the obligations that exist today under EU law will exist when we leave and so, for the most part, firms will not need to make many changes to be compliant.”

“In line with the wider government approach, we do not propose substantive policy changes,” said Delfas. “Our changes are consequential … but we are taking the baseline view that our rules must treat the EU as a third country,” she added.

Delfas, however, underlined the fact that the United Kingdom cannot make contingencies on its own—the European Union also has to contribute, echoing criticisms made by the Bank of England in June that preparations for Brexit (at least in terms of financial services) were one-sided.

“Although progress has been made, risks remain, particularly in areas where actions would be needed by both the U.K. and EU authorities, such as contractual continuity, data adequacy, and clearing. The time to resolve these issues and provide certainty to markets is now, and I hope our EU counterparts will work with us to prepare to manage these risks,” said Delfas.

U.K. Information Commissioner Elizabeth Denham has said that “it would be a hard task for the European Commission to find the U.K. inadequate in terms of data protection.”

Delfas also pressed for the United Kingdom and the European Union to conclude memorandums of understanding and commit to taking reciprocal equivalence decisions on each other’s regimes as early as possible.

She said that “on day one” of Brexit, “the U.K. will have the most equivalent framework to the EU of any country in the world.”

“We may be leaving the EU, but EU and U.K. financial markets will remain heavily interconnected and we need—and want—to continue to have close cooperation with our EU counterparts at ESMA and at the national competent authorities.”