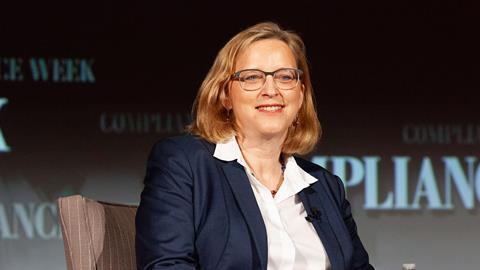 Creating culture from the ashes of scandal

A small, but telling detail: Prior to delivering a keynote speech at Compliance Week 2018 on Tuesday morning, Hiltrud Werner, head of integrity and legal affairs at Volkswagen Group, was up at 3 a.m. to field a phone call with her colleagues on the management board.

While many others in the world of compliance and ethics struggle to find the support of directors, Werner has convinced her corporate leaders that the only way to recover from scandal and reputational damage is transparency, openness, and being on the frontline of cultural change. “Transparency is the only thing that creates trust,” she said at the conference.

Werner’s philosophy and approach to compliance is a much-needed change of pace and breath of fresh air for a company where bad decisions of the past—specifically, a massive emissions-cheating scandal—are still affecting its future prospects.

In March 2017, Volkswagen pleaded guilty to criminal charges that it deceived U.S. regulatory agencies, including the Environmental Protection Agency and the California Air Resources Board, by installing “defeat devices” in diesel vehicles emissions control systems that were designed to cheat emissions tests.

The wrongdoing dated to 2008, when top managers, who spent several years developing a new diesel engine, realized they were not able to meet U.S. emissions standards. Not wanting to halt production and toss aside years of investment, the cabal of managers developed a strategy for evading emissions standards.

That plan included lying and misleading the government and customers about whether certain VW-, Audi-, and Porsche-branded diesel vehicles complied with U.S. emissions standards. The automaker also used special software it developed to circumvent the emissions testing process, and concealed material facts about its cheating from U.S. regulators.

VW was convicted of obstruction of justice for destroying documents related to the scheme and for importing those cars into the United States by means of false statements about the vehicles’ compliance with emissions limitations. As part of its plea agreement with the Department of Justice, Volkswagen paid a $2.8 billion criminal penalty and agreed to the imposition of an independent corporate compliance monitor for the duration of its probation, which is at least three years.

“Far more important than the tone at the top is the conduct from the top. Taking away the element of fear of speaking out is crucial … Trust will, at some point, improve performance.”

Earlier this month, former Volkswagen CEO Martin Winterkorn was indicted by a federal grand jury in the Eastern District of Michigan for conspiracy and wire fraud connected to the emissions-cheating scandal.

Werner’s task is not coordinating the PR offensive that companies typically rely upon to dull public reproach. She sees an internal culture change, as difficult as it may be, as vital to the company’s reclamation of its honor and global status.

“Culture is not something you can just define, and then there it is,” she said. “It is really something that people observe from the outside, and then say whether it is good or bad.”

Part of the change is convincing employees, from frontline workers on up, that the scandal is everybody’s problem—and responsibility to fix—whether or not they had any direct involvement.

“When you look at things from a bird’s eye view, we cheated. Yes. We lied to regulators. Yes. We covered it up,” she added. “We need to tell everyone that there is a red line that should never be stepped over. It is crucial for the company’s culture that everybody understands that even if this time the scandal was kicked off in technical engineering, and you may not have been affected, it is still important that you work toward having a scandal-free organization.”

As part of the Justice Department settlement, Volkswagen is working with a corporate monitor. Werner sees them as partners, in a sense, who are working in concentric circles.

“There is a tremendous effort to build a constructive relationship with the monitor,” she said. “Yes, we do have a lot to do. There are a lot of areas that [the corporate monitor] and his team have asked us to put more emphasis on. There is, however, also a general understanding within the company that we don’t want to wait for the corporate monitor. We need to find the right answers. There are projects we need to kick off ourselves. The impetus for change needs to come from within. It needs to extend beyond the term of the monitorship.”

Werner offered a simple recipe for having an ethical culture. “It is when you do the right thing, even when no one is looking,” she said. “To invest in compliance and ethics programs means that people do the right thing. Their common values are in sync with those of the company.”

Reaching that goal requires developing a culture where employees are comfortable speaking up, even if their message conflicts with managerial directives.

This approach has been successful so far for Volkswagen. Reports and tips have doubled in the past year. “We are making progress, but are still not where we want to be,” Werner said.

Like employees, the compliance program itself must have its voice heard and amplified by management.

Although personally tasked with “integrity” at Volkswagen, Werner sees that responsibility as one that rests board-wide.

“You cannot delegate ethics to one board member,” she says. “This is a joint effort for the whole team. I feel I am doing a good job if the other board members speak about these matters in their own areas of responsibility and it becomes a general topic, like how health and safety are discussed in every department.”

An admitted challenge Werner and other board members face is how much time they devote to reactive versus proactive measures—the past versus the future.

“It is important for us to understand that the diesel scandal will forever be a part of the history of this company,” she said. “We cannot ever have a day where we can check a box and say, ‘OK, we never need to talk about it any more.’ There will always be lessons we need to learn from it, even in the future. No one should ever forget.”

With this in mind, the board has a continued and crucial role in reshaping company culture, she says.

“The most important thing is to get a commitment from board members that they will attend compliance or risk management training at least once a quarter,” Werner says. “It sends the message that no one is excluded. You will have production personnel sitting next to board members. It sends a very strong signal, and I think we need more of that.”

“Far more important than the tone at the top is the conduct from the top,” she added. “Taking away the element of fear of speaking out is crucial … Trust will, at some point, improve performance.”