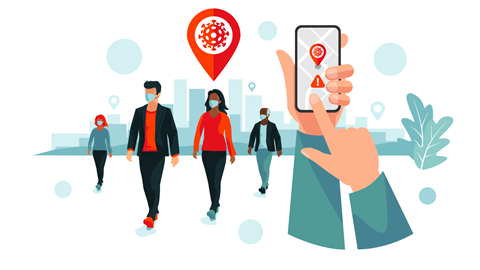 Do we have to give up our privacy to be safe from coronavirus?

How much of our privacy rights and civil liberties will we be willing to give up in the fight against the coronavirus pandemic? After the terrorist attacks of Sept. 11, 2001, Americans showed they were willing to allow these basic rights to erode—a little here, a little there—in exchange for safety.

The coronavirus is an even more insidious threat than terrorism. It has no agenda, respects no borders, and preys on the old and the sick. Successfully beating back this virus may require further erosion of these basic rights in a democracy. But this time, working hand-in-hand with government to monitor our behaviors and restrict our movements, could be some of America’s biggest companies.

How will it happen? Let’s examine the pandemic response playbook. The playbook’s first two responses to an infectious disease outbreak are identification (testing), then isolation. North America and Europe are still mostly still tackling these two responses.

Contact tracing, the third response, has been mostly forced to the sideline as hospitals overflow with desperately sick patients and healthcare workers struggle to obtain sufficient personal protective equipment. But contact tracing may come to dominate the response to the pandemic this summer.

What’s contact tracing? Once a person has tested positive for coronavirus and has been isolated, health officials attempt to establish every person the infected patient has come into close contact with in the past two weeks. Then health officials contact those people and advise them to watch for symptoms as they self-isolate.

Contact tracing has been used successfully in China and South Korea to limit the spread of coronavirus. Several U.S. states, including Massachusetts, are examining how to ramp up contact tracing this summer while hiring lots of people to conduct it, according to STAT, a healthcare industry reporting website.

We probably have to accept contact tracing as a necessary evil. It will help to slow coronavirus hotspots and to beat back a potential second wave of infections. For contact tracing to work, we in democratic, western societies will have to give up a little bit of our rights. Remember what it was like to travel before 9/11, then after? Remember our tolerance for government eavesdropping before, and after? For torturing terrorism suspects before, and after? Like that.

This time, though, we may be ceding our rights to Big Tech. Google and Apple recently announced a partnership that will call a truce between these fierce corporate rivals in the name of fighting coronavirus. The companies will allow their current Android and iOS devices to interface with each other “using apps from public health authorities” for the purpose of using their devices to trace who they’ve been in contact with.

While the tech giants expect to release their portion of the technology in May, it will likely be into the summer before public health authorities release a contact tracing app to the public.

Here’s how it would work. People would voluntarily download the app, and it would begin collecting information on their movements, stored only on their mobile devices. If the person tests positive for coronavirus, s/he would enter that information into the app.

The app would then notify all people whose smart phones (with the voluntary app) have been within six feet of the infected person in the past two weeks. Those people would be advised to self-isolate for two weeks.

Some privacy experts worry that the technology is ripe for misuse, either by government, Big Tech, or other bad actors.

“Contact tracing apps collect and combine two highly sensitive categories of information: location and health status,” wrote University of Washington Law Professor Ryan Calo, in April 9 testimony before the U.S. Senate Committee on Commerce, Science, and Transportation. “It seems fair to wonder whether these apps, developed by small teams, will be able to keep such sensitive information private and secure.”

He went on to list other concerns, like that the app would be inaccessible to the poor, that it could show an area as “safe” only because few users had downloaded the app, or how people could game the system by uploading fake positive tests to make an area look like a hotspot.

This entire argument also depends on the government ramping up coronavirus testing so that everyone—not just those showing symptoms, because health officials acknowledge that 25-50 percent of people infected may show only mild symptoms—can be tested. At least in the United States, we are far, far away from universally available coronavirus tests.

Back to the privacy and civil liberty concerns. Google and Apple have pledged to be as open and transparent as possible, while also protecting the privacy of people using the app.

“Privacy, transparency, and consent are of utmost importance in this effort, and we look forward to building this functionality in consultation with interested stakeholders,” the companies said in their statements. “We will openly publish information about our work for others to analyze.”

The Trump administration has not yet unveiled how much information it intends to reveal about the creation and use of this app, and that has some Democrats worried.

“I would hope that the Department of Health and Human Services—and the Trump Administration as a whole—follow similar steps to be more transparent and, for example, publish the full agreements they have signed with tech companies such as Apple,” U.S. Sen. Robert Menendez (D-N.J.) told The Verge.

We should demand to know the terms of the deal the government is making with these companies in order to create this app.

We should demand to know how it is protecting our rights under the Constitution.

And we should know how the government will ensure the data collected will not be used for purposes other than contact tracing.