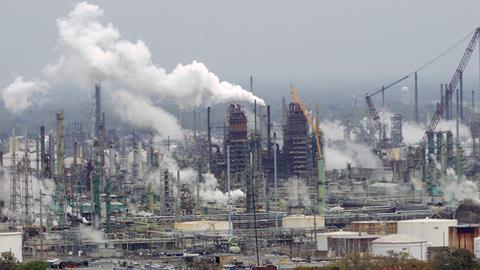 ExxonMobil’s governance is as toxic as its carbon footprint

In full disclosure, I believe ExxonMobil to be unabashedly one of the most evil, deceitful, greedy corporations on the planet.

As the 11th-largest public company in the world and the second-largest in the energy sector, with a catastrophically destructive carbon footprint, ExxonMobil very easily could be a leader in climate change efforts. Instead, the indifferent attitude of CEO Darren Woods and his senior management team have made it loud and clear that they take the exact opposite stance. A ringleader in the industry, ExxonMobil by far outspends its rivals on new oil and gas projects, particularly its controversial fracking activities in the U.S. Permian Basin.

Having funded multimillion-dollar propaganda campaigns for decades, ExxonMobil’s talking heads are practiced at telling anybody who will listen—employees, customers, regulators—exactly what they want to hear. They tout, for example, the many leading universities with whom they partner (fund) on lower-emissions research programs. And they’re proud of the measly $9 billion they’ve spent since 2000 developing and deploying lower-emissions energy solutions—in comparison, by the way, to the staggering $167 billion it will spend on capital expenditure investments in new oil and gas fields over the next 10 years.

By outright refusing to be more transparent and accountable for climate risk, ExxonMobil’s actions validate their longstanding, corporate greenwashing ways. We saw the latest demonstration of this when ExxonMobil’s board fought hard to keep off the ballot a proposal that would have allowed investors to vote on whether the company must set carbon emissions targets that align with the greenhouse gas reduction goals of the 2015 Paris climate accord. ExxonMobil ultimately won the support of the Securities and Exchange Commission, which sided with the company’s objection that the resolution would have amounted to “micromanaging.”

In retaliation, shareholders launched a proxy fight, which came to a disappointing end at ExxonMobil’s annual shareholders meeting on May 29, when shareholders ultimately shot down several climate change-related proposals. One of those measures would have split the chief executive and board chairman role, which did receive a vote of 40.8 percent in favor.

Another proposal calling for a special climate change board committee was shot down by 92.6 percent of voters. Shareholders also overwhelmingly rejected a proposal calling on the board to create a report on the risks of ExxonMobil’s U.S. Gulf Coast petrochemical investments.

While oil and gas companies as an industry have a long way to go on climate change efforts, it’s worthy to note that Shell last year became the first and only major energy company to commit to cutting emissions generated by both its activities and the products it sells, and the company further announced that it would link executive pay to these goals. In comparison, BP at its annual shareholders meeting on May 21 supported a shareholder resolution to set targets for cutting its greenhouse gas emissions for its operations, but not its products, a proposal that shareholders favored by a vote of 99.14 percent.

It’s no secret that climate change poses a material risk to companies and, thus, such shareholder resolutions will only grow in importance. Burying your head in the sand is not a sustainable option for anybody.

The fact that Exxon’s senior management continues to think only about its bottom line and is so indifferent toward the devasting global consequences of its actions demonstrates a corporate culture with no moral compass or sense of integrity, one whose governance is as toxic as its carbon footprint.

In case you’re wondering, no, I do not buy gas from Exxon or Mobil. I would run out of gas and walk through a desert, if that was my only option. ExxonMobil will never have my business.