Like many CCOs, I didn’t envision my career taking me toward compliance. I barely knew what the word meant before joining Compliance Week in 2018.

I’ve learned a lot in the last three years, and I’m still learning as I take on the Editor in Chief role at CW. Every day, I find myself fascinated at how much compliance, often behind the scenes, weaves its way into the outward-facing parts of the business world.

For example, leadership at Samsung changing tone to publicly own up to past mistakes. The fingerprints of ethics-minded individuals are apparent in many of the positive strides like this that corporations have made to address wrongdoing.

It is on this note, though, that I express concern for compliance as 2022 approaches. For the third straight year, respondents to our “Inside the Mind of the CCO” survey indicated lack of support and resources as the No. 1 part of their job that keeps them up at night, an increase to 25 percent this year out of more than 300 responses. 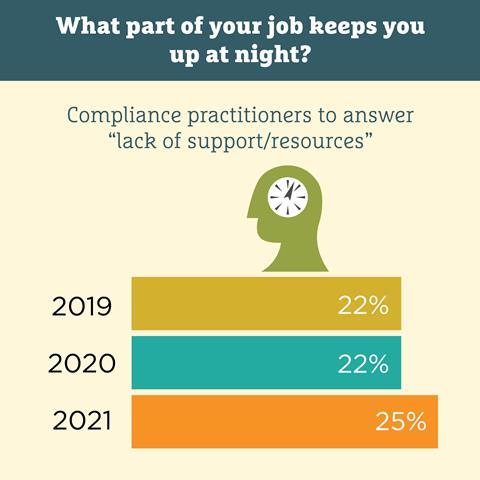 Add in significant regulatory developments in several key areas—namely environmental, social, and governance (ESG)—on the horizon that are falling under the purview of compliance officers, and there’s even more reason to worry the position might be becoming a catch-all.

Many see compliance as a natural fit to take the lead on these types of initiatives, but compliance officers themselves disagree, according to our survey. Asked what compliance’s role should be in specific areas, relatively few respondents thought it should have primary oversight on matters of ESG (23 percent) and diversity, equity, and inclusion (9 percent). Also examined in this lens was cybersecurity (16 percent), which often crosses over into the department at smaller organizations.

This isn’t to say compliance shouldn’t be involved—the majority response in each instance was it should be “part of a committee”—rather, businesses must be mindful of adding more to the already full plates of their compliance officers without additional resource support.

Still, despite these burdens, 95 percent of survey respondents said they like their job. That’s what I admire most about covering this profession—even if the deck is stacked against them, compliance officers keep their heads high and set a positive example for the rest of the business to follow.

What I am most looking forward to in my new role is continuing to build relationships within the industry—and continuing to learn from each interaction along the way.