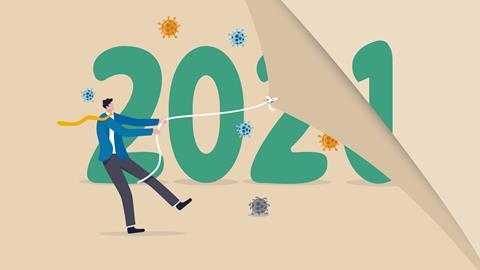 Before we get to my wish list for 2021, let’s get one thing out of the way: Yes, my No. 1 hope for the year ahead (like every other human on the planet) is that these COVID-19 vaccines are effective and speedily delivered and we can all return to normal as safely and quickly as possible.

I’m sending up my thoughts and prayers on that one, but since we’re in the business of ethics, risk, and compliance in this space, here are 10 other things I’d like to see in 2021:

A smooth presidential transition: If President Trump refuses to grant President-elect Joe Biden a clean transition in mid-January, Senate Republicans could make life difficult for the new administration before it has a chance to get off the ground. One of the first things any president must do is make cabinet appointments and select new heads for regulatory agencies, and those appointments need to be confirmed by the Senate. Should Republicans maintain their slim Senate majority, and if the reflexive partisanship that defined the Trump era carries into the new year, some key regulators could be left in leadership limbo well into 2021.

A postmortem on our reaction to COVID-19: In the wake of any crisis, organizations inevitably undergo a review of what went right, what went wrong, and—most importantly—what can be done better next time. You can be sure compliance departments will undergo this exercise. What most of them will find is that, by and large, their businesses pivoted to remote working, reassessed their risks, and instituted new policies and procedures on the fly with relative success given the extreme circumstances. Here’s hoping the federal government undergoes the same exercise.

Congress taking up the issue of data privacy: The United States desperately needs a modernized, harmonized approach to protecting data for the sake of both consumers and the businesses that serve them. The invalidation of the EU-U.S. Privacy Shield that previously protected trans-Atlantic data transfers and the blossoming (but inevitably incongruous) new privacy regulations at the state level make this a regulatory void begging to be filled. Alas, competing priorities and conflicting agendas in Congress make this a long shot in the short term.

Empathetic leadership: One of the silver linings of this pandemic has been the increased focus on employee wellness. Many companies have seen a cultural shift that places a larger emphasis on how workers are holding up during these tough times, a much-needed correction from the drumbeat of performance and profits above all else. CEOs (and CCOs for that matter) would be wise to continue this trend post-pandemic. Employees who feel supported and heard and know their leaders care for them as people are happier, more productive employees.

An SEC focused on Wall Street, not Main Street: Trump’s SEC under outgoing Chairman Jay Clayton was fixated on rooting out fraud involving Main Street investors, but under new leadership we should expect the focus to shift to Wall Street. Dodd-Frank rollbacks left the markets unchecked, which is part of the reason why we saw the Dow cross 30,000 in the middle of a pandemic, with CEOs’ bank accounts growing to sizes unseen while millions are unemployed and on the brink of financial disaster. A regulatory reckoning could be coming.

An ethical awakening: We’re living through what could be a hinge in history, and not just because of the once-in-a-lifetime pandemic. The racial equality movement sparked by the death of a Black man, George Floyd, in the hands of police in Minnesota combined with other galvanizing incidents across the country could lead to real change. Companies are creating not just PR statements but actual policies to drive more diversity and inclusion in the workforce. At the board level, some states have created laws requiring more diversity, and Nasdaq on Dec. 1 asked the SEC to approve a requirement that any listed company disclose the makeup of its board, and that if it doesn’t meet diversity requirements, to tell shareholders why not. Similar environmental disclosure requirements might not be far behind.

An empowered CFPB: Let’s not sugarcoat it: The Consumer Financial Protection Bureau was a shell of its former self under President Trump. The Biden administration surely has intentions to adjust the strategy of the agency created by Dodd-Frank. In fact, in a policy document on his Website, then-candidate Biden promised to “reinvigorate the Consumer Financial Protection Bureau to ensure that banks and lenders [could not] prey on consumers.” Somewhere, Elizabeth Warren is smiling.

A little grace in any COVID-related enforcement actions: Don’t take this the wrong way; we’re not talking about granting clemency to bad actors who took advantage of a pandemic to willfully commit fraud. Throw the book at those guys. We’re referring to people or companies that will be found to have violated rules during the pandemic for reasons related to a strain on resources, breakdowns in crisis management, or some other well-intentioned but poorly executed decision or action. These are the folks who deserve a little flexibility, perhaps guidance or a slap on the wrist instead of a business-crushing fine. Compassionate leaders know when the carrot is a better option than the stick.

Getting together in person!: Yes, we learned we can get by in a virtual environment when we’re forced to—but, if you’re like me, you’re itching to get back to interacting with colleagues and peers in person. I miss the daily coffee runs with co-workers, the serendipitous brainstorming that occurs in the office, and of course those times we come together as a community to share ideas and best practices at a Compliance Week event. With fingers crossed, I hope to see many of you sometime in the new year!