He is now known as Robert Baldasare, money launderer and president of an international trade finance company. He ends up in Colombia and Panama to travel, party with, and help wash millions of dollars for the Central American criminal elite. 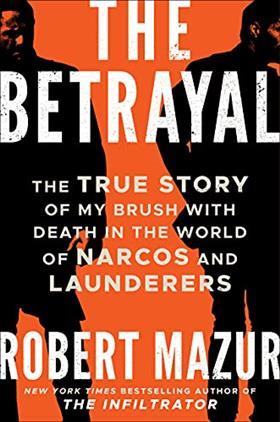 Mazur’s latest book about his undercover endeavors—the first one, “The Infiltrator,” was turned into a movie starring Bryan Cranston—is called “The Betrayal” and chronicles his infiltration of Colombia’s notorious Cali drug cartel.

The undercover operation in Colombia was working like clockwork—Mazur gleaned key names and details from secret recordings and convinced his targets he was one of them. But the operation started going dangerously sideways following the betrayal of a key comrade, exacerbating the threat to Mazur’s identity, mission, and life.

The book is engrossing, and Mazur’s specialty is dialogue; you feel like you’re in the room listening to the colorful figures he meets and hoodwinks, hearing them talk about their skills at disguising drug proceeds and supporting products that ruin lives and kill people, all while sleeping with one eye open.

For anyone working in the compliance space, the book is a true draw, given the descriptions of money laundering and how it is supported by an alliance of professionals as part of what Mazur calls “a sweeping, international marketing plan.”

I asked Mazur about those aspects of the book.

“There is a whole industry built around helping wealthy people seeking secrecy about beneficial ownership and their money investments,” he said. “They set up offshore entities, use safe deposit boxes to store assets for clients, employ bankers to act as couriers, use accountants and lawyers to disguise and bundle payments, and more.”

Mazur explained the U.S. government is unduly focusing on shipping documents in countries and less on the records of payments with these transactions. Little attention is being paid to the flow of export revenue through the correspondent banking process in the United States, a process that enables foreign institutions to process illicit funds for bad guys disguised as repatriated export revenue.

“We need to analyze which entities are receiving funds in abnormal methods, meaning receiving unjustified payments from multiple sources, including nondepository checks (cashier’s checks, money orders, MoneyGrams, etc.) in increments under $10,000,” Mazur explained. “Artificial intelligence is a valuable tool that can be used to effectively analyze the flow of repatriated export revenue.”

Mazur also observed how anti-money laundering charges are often added on in an enforcement action—something tacked onto a Foreign Corrupt Practices Act, economic sanctions, or other type of case.

This is not exactly sending a message of deterrence to money launderers.

“There should be a joint task force dedicated to its enforcement, just like there is for terrorism,” Mazur said, referring to the Federal Bureau of Investigation’s Joint Terrorism Task Force. “A coordinated response would help pool the skills and resources of a variety of professionals and groups and acknowledge the fact money laundering has direct ties to terrorism.”

At the end of “The Betrayal,” Mazur discusses how we can better protect youth from getting involved in drug use and trafficking, specifically touting the value of free education for disadvantaged young adults.

“If they could get 14 years of paid-for education, the latter two years at a trade school or college and maybe two more years if they perform significantly well, it would go a long way to getting people focused on other means of earning a living and feeling a sense of belonging,” he said.

Mazur, now a lecturer and author who travels around the globe to discuss these issues, said this about his future plans: “I want to get people to think a new way and inspire them.”

Julie DiMauroJulie DiMauro is CW's Director of Training & Data. She joined Compliance Week in 2020 after spending 10 years at Thomson Reuters as a subject matter expert in its risk and compliance department.