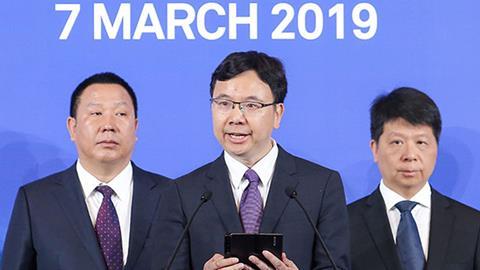 At a press conference in Shenzhen, China on March 7, Huawei announced that it has filed a complaint in a U.S. federal court that challenges the constitutionality of government restrictions on its products.

In August, following Congressional authorization, President Trump signed into law a prohibition on federal agencies conducting business with, or purchasing products from, the Chinese tech giant. Section 889 of the 2019 National Defense Authorization Act also bars all U.S. Government agencies from contracting with or awarding grants or loans to third parties who buy Huawei equipment or services.

Huawei, founded by a former Chinese military officer, has long been accused of suspect behavior by the United States and its allies. Supporters of the prohibition claim that the company’s smart phones are used as an espionage tool. Tensions between the United States and Huawei have been further inflamed by a still-ongoing extradition case. On Dec. 1, Chief Financial Officer Sabrina Meng Wanzhou was arrested by Canadian officials. She could be sentenced to up to 30 years in prison if convicted on allegations she, and her company, evaded Iran-targeted sanctions and committed bank fraud.

Huawei’s lawsuit, filed on March 6 in U.S. District Court in Plano, Texas, where the company’s U.S. headquarters is based. According to the complaint, the governments prohibitions violate the Bill of Attainder and the Due Process clauses of the U.S. Constitution. The prohibition also “violates the separation-of-powers principles enshrined in the Constitution, because Congress is both making the law, and attempting to adjudicate and execute it,” it says.

The lawsuit challenges the constitutionality of parts of the National Defense Authorization Act and seeks a permanent injunction against the federal restrictions.

“Section 889 is based on numerous false, unproven, and untested propositions,” says Song Liuping, Huawei’s chief legal officer. “Contrary to the statute’s premise, Huawei is not owned, controlled, or influenced by the Chinese government. Moreover, Huawei has an excellent security record and program. No contrary evidence has been offered.”

From Huawei’s perspective, the NDAA restrictions “prevent the company from providing more advanced 5G technologies to U.S. consumers, which will delay the commercial application of 5G, in turn, impeding efforts to improve the performance of 5G networks in the U.S.”

“Beyond this, network users in rural and remote regions of the U.S. will be forced to choose between government funding and high-quality, cost-effective products,” a statement released at the press conference says. “This will impede the network upgrade process, thus widening the digital divide. Even worse, the restrictions on Huawei will stifle competition, leaving U.S. consumers paying higher prices for inferior products.”

“The U.S. Congress has repeatedly failed to produce any evidence to support its restrictions on Huawei products. We are compelled to take this legal action as a proper and last resort,” Guo Ping, Huawei’s rotating chairman said. “This ban not only is unlawful, but also restricts Huawei from engaging in fair competition, ultimately harming U.S. consumers.”

“The U.S. Congress has repeatedly failed to produce any evidence to support its restrictions on Huawei products. After exhausting all other means to allay the doubts of some U.S. lawmakers, we are left with no choice but to challenge the law in court. This ban not only is unlawful, but also harms both Huawei and U.S. consumers,” he added. “For three decades, we have maintained a solid track record in cyber-security. Huawei has not and will never implant backdoors. We will never allow others to install any in our equipment.”

“The U.S. Government has long branded Huawei a threat,” Guo added. “It has hacked our servers and stolen our e-mails and source code. Despite this, the U.S. Government has never provided any evidence supporting their accusations that Huawei poses a cyber-security threat. Still, it is sparing no effort to smear the company and mislead the public about Huawei. Even worse, the U.S. Government is trying to block us from the 5G markets in other countries. Given that the United States has never presented any evidence to substantiate its security allegations, we question its intent of not wanting other countries to use Huawei: Is it afraid that other countries may catch up to and overtake it using our advanced 5G technologies?”

Glen Nager, a partner at law firm Jones Day, is representing Huawei. He broke down the key elements of the lawsuit.

The Bill of Attainder Clause prohibits legislation that is both selective and imposes punishment. “The Complaint argues that Section 889 violates this constitutional proscription, because among other things it selectively bars only Huawei (and one other entity) from providing certain products to the Federal Government, its contractors, and federal loan and grant recipients,” he said.

The Due Process Clause requires “due process of law” before anyone “is deprived of life, liberty, or property,” he added. “Our complaint argues that Section 889 violates this generality requirement by singling out Huawei and precluding it from selling covered equipment; indeed, it argues that Section 889 stigmatizes Huawei by selectively insinuating that Huawei is subject to Chinese Government influence and is a security risk.”

Under the Constitution’s Vesting Clauses, Congress has only the power to make rules, not the power to apply those rules to individuals, Nager said. “Instead, the power to apply rules to specific individuals belongs to the executive and the judiciary. The Complaint argues that Section 889 violates the Vesting Clauses and the separation of powers embodied in them by effectively adjudicating Huawei’s supposed connection to the Chinese government, instead of allowing the Executive and the courts to make that judgment—as the statute allows for other Chinese companies.”