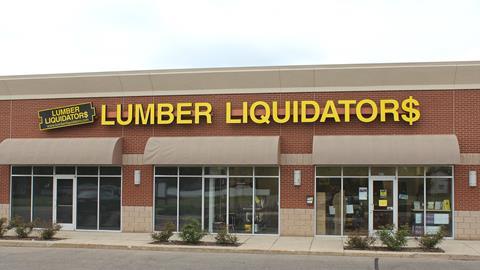 Lumber Liquidators Holdings, a discount retailer of hardwood flooring, will pay a total of $33 million in criminal and regulatory penalties for misleading investors concerning the sale of its laminate flooring from China to its customers in the United States.

The charges, brought separately by the Securities and Exchange Commission and the Department of Justice, are the result of materially false and misleading statements that Lumber Liquidators made to investors in March 2015 broadly denying allegations that aired on a “60 Minutes” news segment alleging the company was selling laminate flooring from China that contained high levels of formaldehyde that exceeded regulatory standards. The news program showed undercover video of three of Lumber Liquidators’ Chinese laminate suppliers stating they provided the company with products that did not comply with regulatory requirements.

In response, Lumber Liquidators fraudulently informed investors that third-party test results of its flooring products proved compliance with formaldehyde emissions standards, and that it had discontinued sourcing materials from suppliers that were unable to meet these standards. In truth, as stated in the SEC’s order, Lumber Liquidators knew its largest Chinese supplier had failed third-party formaldehyde emissions testing and was unable to produce documentation showing regulatory compliance. The SEC’s order further found that, despite having evidence confirming that the individuals in the “60 Minutes” undercover video were factory employees of its suppliers, Lumber Liquidators falsely stated its suppliers were not depicted in the video.

To settle the SEC action, Lumber Liquidators will pay $6 million in disgorgement and prejudgment interest. It also consented to the SEC’s order finding that it violated the anti-fraud provisions in Section 10(b) of the Securities Exchange Act of 1934 and Rule 10b-5 thereunder and Section 13(a) of the Exchange Act and related rules, which require periodic filings with the SEC to contain all material information. Additionally, Lumber Liquidators agreed to cease and desist from future violations of the charged provisions and cooperate fully with any further investigation, litigation, or other proceeding by the SEC staff relating to this matter.

“This penalty reflects the nature and seriousness of the conduct, as well as Lumber Liquidators’ ongoing cooperation with the United States and the company’s extensive efforts at remediation,” the Justice Department stated.

The company has agreed to implement rigorous internal controls and cooperate fully with the Department’s ongoing investigation, including its investigation of individuals. Among other remedial efforts, Lumber Liquidators suspended the sale of all laminate flooring from China in May 2015; offered consumers in-home testing for already installed flooring; and implemented new policies and procedures regarding compliance with CARB emission standards and other environmental regulations, sourcing of flooring products, financial reporting, and internal controls.

Additionally, the employees involved in wrongdoing either were terminated or resigned from Lumber Liquidators, and the company replaced its executive management team with experienced executives who have displayed a commitment to building an ethical corporate culture.

In a statement, Lumber Liquidators Chief Executive Officer Dennis Knowles said the company is “pleased to have reached a resolution,” and that it will continue to take steps with its new executive team to improve its ethics and compliance efforts. “Lumber Liquidators has undergone a significant transformation in recent years, and today is a new company led by an entirely new management team that is committed to our customers, compliance, transparency, and accountability across our organization,” Knowles said.

“In the lead-up to these agreements, Lumber Liquidators has incorporated extensive remedial measures that include the implementation and enforcement of a comprehensive compliance, ethics, and reporting program, as well as training and guidance on relevant policies and procedures,” Knowles added. “While we will continue to improve our compliance processes, having these matters behind us allows us more resources to focus on our customers, great product lines, and our strategic vision.”

Under the DPA, the Justice Department said it will defer prosecution of the company for securities fraud for an initial period of three years to allow Lumber Liquidators to demonstrate good conduct.