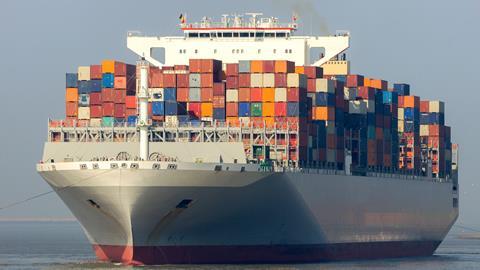 Companies wondering how to handle risks the worldwide coronavirus outbreak will have on global supply chains should look for clues to the Great Recession of 2008-09, the last time so much capacity stood idle.

For different reasons, the Great Recession and the coronavirus outbreak have affected global shipping in much the same way, said Lars Jensen, a container shipping analyst and CEO of SeaIntelligence Consulting in Denmark.

A slowdown in the first two months of 2020—caused by Chinese factories stopping production after the coronavirus outbreak—has led to a host of canceled cargo ship sailings. The result has been idled ships and empty shipping containers sitting in European and North American ports. In 2008-09, a similar slowdown was caused by a global downturn in consumer demand.

About 11.7 percent of the world’s shipping fleet was idled at the peak of the recession, according to a recent story in JOC.com, a news website for the maritime shipping industry. About 8.8 percent—the highest rate since 2009—of global fleet capacity was idled by the current coronavirus crisis as of the end of February, the story said.

“We’re looking at something that I have never seen in my professional life. I’m afraid it’s going to last a lot longer than we have been led to believe.”

When Chinese factories get back up and running—Jensen says he’s seeing an uptick in activity in the past week—the key to pushing Chinese goods out into the world will depend on how many empty shipping containers are on hand in Chinese ports.

“All these empty containers in North America and Europe need to get back to China,” he said. Some shipping companies are considering sending containers back—empty—so they can immediately be filled with Chinese goods and shipped back out. But most shippers are waiting for orders, Jensen said.

One of the largest shipping companies in the world, French shipping company CMA CGM, predicted in financial statements that its operations in China will return to normal later this month, according to a Reuters story.

But another global shipping expert is less optimistic that Chinese factories will be back to anything like normal production before April, or even May.

As a result, companies should explore shifting their supply chain to other parts of the world, like South America or closer to home, said Patrik Berglund, CEO of Xeneta, a Norwegian company that advises Fortune 500 companies on global shipping, logistics, and supply chain management.

“I’m telling people not to wait on this,” he said. “And even if they find a new supplier in South America, they may have the same issues.” Building redundancies into your supply chain is a wise long-term investment, he said, even if it doesn’t solve short-term disruptions in your company’s supply chain.

The most serious short-term issue facing manufacturers, and their customers, is a potential slowdown later this month, according to a story in JOC.com.

At the moment, North American and European companies are still producing at something near to full capacity as they use up their inventories.

But South Korean and Japanese manufacturers are already slowing down production due to a lack of key parts, the story said—a precursor to what is coming for North American and European companies.

“Our customers are running out of stock,” Berglund said. Manufacturers might be able to maintain current production levels for a few more weeks, but then will be forced to slow down.

Depending on whether that slowdown is only a few weeks long, or lasts well into 2020, will determine whether the coronavirus slowdown of global trade will mirror what happened in 2008-09.

Berglund said he is worried that companies won’t be able to get samples for seasonal items, and the current downturn in global shipping could be felt well into next year.

“We’re looking at something that I have never seen in my professional life,” he said. “I’m afraid it’s going to last a lot longer than we have been led to believe.”