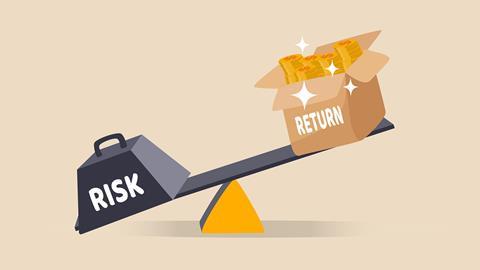 SPACs are big-risk, big-reward investments that can give compliance fits

Special purpose acquisition companies, known as SPACs, are all the rage in 2021.

Once a moribund and little-used method to bring a private company public, SPACs dominated the market in 2020 and the first three months of this year.

SPACs consist of little more than groups of investors who have joined together under a stock market listing. Once formed, the SPAC looks to buy private companies and turn them public, circumventing the more time-consuming, regulatory-laden, and traditional path of an initial public offering (IPO). SPACs have no business plan, no sales, no product. They exist only to buy other businesses—and to make a hefty profit for the service they provide.

Considered dicey investments, SPACs come with a unique set of risks that can tie compliance officers in knots, from conflicts of interest that are baked into fund documents to pronounced risks of insider trading.

SPACs are attractive because they are fast. While IPOs can take a year or two to complete, SPACs can consummate a deal in only a few months.

SPACs exploded in popularity last year, with 248 formed raising $83 billion in capital to launch new public companies. Compare that to 2019, when there were only 59 SPACs raising $13 billion, according to SPAC Analytics. 2020 was the biggest year for SPACs since at least 2003 by a lot—but 2021 is already bigger.

In the first three months of 2021, 275 SPACs raised $88 billion, comprising a stunning 84 percent of all public company launches and 73 percent of all funds raised, according to SPAC Analytics. 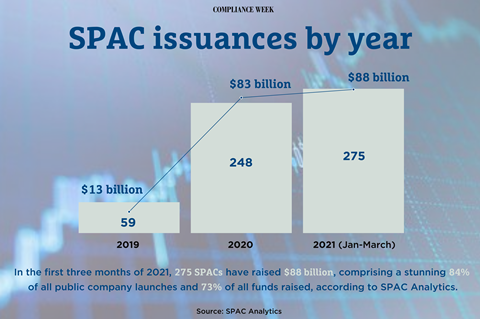 Successful SPACs over this period include fantasy sports company DraftKings, with investor returns of 812 percent, and lithium battery manufacturer QuantumScape (729 percent), according to SPAC Analytics. But there are many more that lose money for investors.

One financial expert warns the SPAC bubble is about to burst.

“What drove all this was the tremendous desire for sexy tech companies,” said Bradford Cornell, a senior advisor at Berkeley Research Group in Los Angeles. “People are willing to pay a lot to get into these companies right now. But I think the whole market has already ended. I don’t think it can go further. SPACs are not a good deal for the company being purchased or investors.”

On the regulatory radar

Due to the sudden popularity of SPACs, the Securities and Exchange Commission (SEC) has turned its regulatory attention to them.

In December, the SEC issued an investor alert that explained the differences between SPACs and IPOs. The SEC’s Division of Corporation Finance issued further guidance a couple weeks later, laying out the numerous disclosure issues related to SPACs. And then in March, the SEC warned investors through an alert not to invest in SPACs just because famous people sponsor them.

SPACs are “becoming so prevalent now; we’re a little concerned about that,” said Peter Driscoll, director of the SEC’s Division of Examinations at the Investment Company Institute’s virtual mutual funds conference earlier this month. “… Our broker-dealer team is going to be looking at SPACs in terms of how they’re listed and the process of going out.”

On the advisory side, particularly private funds, Driscoll said, “We’re looking at the investment side—the conflict associated with it.”

“Lately, we have seen more and more evidence on the risk side of the equation for SPACs as we see studies showing that their performance for most investors doesn’t match the hype,” Lee said during welcoming remarks of the Investor Advisory Committee this month, as reported by Business Insider. Lee added the agency will examine “the structural and the disclosure issues” of SPACs.

This week, the SEC sent letters to Wall Street banks requesting they voluntarily hand over information about their SPACs, according to multiple reports, including Reuters. Sources told Reuters the SEC’s Division of Examinations asked for information on SPAC deal fees, volumes, compliance, reporting, and internal controls.

The SEC has recently begun investigations into two companies that were launched with SPACs, both electric vehicle manufacturers. Nikola acknowledged in November that it received subpoenas from the SEC and Department of Justice regarding fraud allegations made by a short seller. Meanwhile, Lordstown Motors confirmed earlier this month the SEC had requested information in response to short-seller fraud allegations.

What compliance needs to know

Even with the renewed interest in SPACs, the number of publicly traded companies has been declining steadily over the past 20 years. SPACs, which have been around for decades, are another way to create more public companies, said Norm Champ, a senior partner in the Investment Funds Group at Kirkland & Ellis and former director of the SEC’s Division of Investment Management.

“It’s definitely shifted the channel by which companies can go public, but it is also increasing the number of public companies, which is a good thing,” Champ said.

If you’re a compliance officer at a firm that manages and launches SPACs, you can expect regulators and investors to begin digging through your policies, procedures, and disclosures to look for potential missteps and misalignments. Add conflicts of interest and insider-trading risks, and that’s a lot for compliance officers to watch out for—especially if the SPAC bubble is truly about to burst.

The trading rules around the SPAC need to be made clear, and then those rules should be monitored and enforced. Can employees of the firm that launched the SPAC buy into the SPAC? How will the firm or fund handle potential material nonpublic information as they negotiate with private firms looking to go public?

Lastly, compliance professionals should be aware of all the disclosures required for this type of investment vehicle, Champ said.

Dave Brown, partner in Alston & Bird’s Corporate Transactions & Securities Group, said SPACs give sponsors opportunities not afforded to other investors, like access to discounted stock purchases of the company being acquired. That needs to be clearly disclosed to potential investors in the SPAC.

Another area of potential conflict of interest arises when sponsors of the SPAC have a connection with the company being purchased, be it business or personal, Brown said.

“Lately, we have seen more and more evidence on the risk side of the equation for SPACs as we see studies showing that their performance for most investors doesn’t match the hype.”

“How is the sponsors’ interest different from the other investors in the SPAC?” he asked. “What is a sponsor’s motivation to get a deal done? The board (of the SPAC) has fiduciary responsibilities for all its shareholders. These conflicts need to be acknowledged and disclosed.”

SPACs typically have an 18-24 month time period in which to acquire a private company and turn it into a public one. Under that time crunch, sponsors of the SPAC may have an increased incentive to close a deal quickly or lose their investment—or at least their financial advantage.

“The rush to get a deal done in a two-year timeframe may cause people to make decisions that are less defensible later on,” said Julie Copeland, a partner at global advisory firm StoneTurn.

“There have to be adequate disclosures around certain relationships and all the potential conflicts that could arise,” he said.

Insider trading is an ongoing concern with SPACs, Brown said, particularly as the SPAC enters into negotiations to purchase a private company and take it public. And when negotiations enter the final phase, trading blackouts need to be enforced, he said.

“You want the blackout enforced until you announce the deal,” Brown said. “Look at this issue all along the way, knowing that they will be scrutinized in hindsight.”

Once the SPAC finds an acquisition target, due diligence should be thorough and complete, Copeland said. And with the ever-shrinking number of potentially suitable private companies in the United States, SPACs may increasingly look to foreign markets.

“As SPAC targets veer out of the U.S., be aware of the regulatory environment in the merger target country,” Copeland said. Finances of companies in other jurisdictions, for example, may be less transparent, she said.

Companies to be acquired by SPACs may not have robust cultures for compliance, Copeland said, something else to watch out for.

“The integration needs to be real: You need to see all the black holes, and you don’t want to be surprised by anything,” she said. “You want to act immediately to mitigate any risk.”