Natural disasters, droughts, port disruptions, cargo theft, and industrial fires are some of the top supply-chain risks that should keep executives and chief risk officers on their toes in 2019, according to a new risk report published by DHL Resilience360.

The report, based on risk and incident data collected by DHL’s cloud-based risk management provider Resilience360, presents a global overview of major events that disrupted supply chains in 2018 across five key regions: North America, Europe, Latin America and the Caribbean, Africa and the Middle East, and Asia Pacific.

1. Global trade wars and Brexit. Global trade wars between the United States and the rest of the world will continue to impact many manufacturing supply chains, due to the imposition of U.S. tariffs and the consequential retaliatory tariffs that many countries have placed on a wide range of consumer products and components, impacting nearly all industries.

Some companies, however, are turning this risk into opportunity. For example, U.S. motorcycle maker Harley Davidson announced last year that it would shift production of its motorcycles for EU destinations out of the United States to Thailand to avoid EU tariffs. “During the quarter, we saw proof in the wisdom of our Thailand manufacturing investment,” Harley-Davidson CEO Matt Levatich said April 23 on a first-quarter earnings call. “The tariff mitigation we realized allowed more competitive pricing and access to more customers.” Other companies may similarly want to consider how they can mitigate newly imposed tariffs.

2. Raw material shortages. Political instability and plant shutdowns are likely to result in shortages of critical raw materials. The Resilience360 risk report cited as one example the world’s supply of cobalt for lithium-ion batteries, which are used in a wide range of consumer products—from smartphones to electric vehicles.

According to the 2018 U.S. Geological Survey, 58 percent of worldwide production of cobalt in 2017 came from the Democratic Republic of Congo (DRC). The fact that so few mines produce this natural resource and that DRC has been linked to human rights abuses poses a high risk to supply chains that source this raw material.

Some companies are responding accordingly. Panasonic, for example, has announced plans to start developing cobalt-free automotive batteries. With certain raw materials being vulnerable to widespread disruption caused by demand spikes or production bottlenecks, other industries that depend on such resources may be forced to switch to other products.

3. Safety recalls. Quality issues in the pharmaceutical sector pose an especially high safety risk, as more drug companies source an increasing amount of active pharmaceutical ingredients from producers in developing economies, according to the Resilience360 report. Consider, for example, that several drug makers and sellers—including Teva Pharmaceuticals, Mylan, and CVS Health—are currently facing dozens of lawsuits after carcinogens were found in heart medications produced in a drug manufacturing facility in China.

“From a compliance point of view, what we see is a lot of focus on sourcing issues,” Mirko Woitzik, a senior risk intelligence analyst at DHL Resilience360, tells Compliance Week. Companies are increasingly aware that it’s not always enough to work with just their Tier 1 suppliers, but that they also need more transparency down the line concerning who their most critical suppliers are sourcing from, and how compliant they are with safety risk, he says.

As just one example, continued record-low water levels on Germany’s Rhine River, which serves as a main conduit for several manufacturers, will continue to delay shipments and increase operational costs by hundreds of millions of dollars as companies are forced to turn to more expensive road or rail transport alternatives. Some companies, however, are finding ways to safeguard against this risk. Steelmaker Thyssenkrupp, for example, told Reuters that it’s exploring alternative modes of transport and barge modernizations, and that it’s expanding storage and reception facilities. Other companies may want to consider similar alternatives. 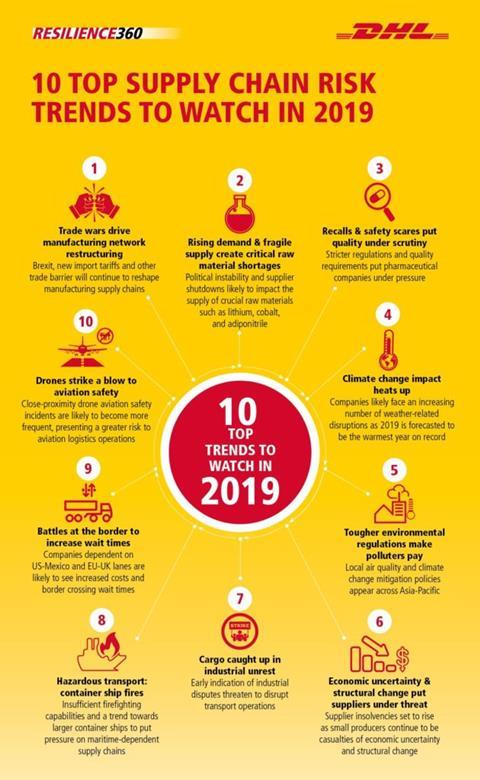 When it comes to natural disasters, certain regions of the world pose a significantly higher risk than other areas: Earthquakes, volcanic eruptions, and tropical storms are commonplace in Asia Pacific, where most countries sit along the Pacific Ring of Fire. Such natural disasters are also a common occurrence in Latin America, particularly in Chile, Peru, Ecuador, Nicaragua, and Guatemala, according to Resilience360. These high-impact events commonly wreak havoc on supply chain operations in these parts of the world, due to power outages, flight cancellations, port closures, and cargo ship groundings. So, companies should have risk mitigation plans already in place to plan in advance for such disasters.

5. Tougher environmental regulations. To counter the impact of climate change, authorities around the world have started to introduce stricter environmental regulations and step up their enforcement efforts, including new rules governing emissions and the imposition of new carbon taxes. “Some of the most significant effects of these policies are expected in China, where strict rules have been introduced to reduce emissions from the burning of coal, including enforced production shutdowns and plant closures,” Resilience360 said.

6. Economic uncertainty. The global trade war, uncertainty over Brexit, and tougher environmental regulations could all become driving factors in bringing insolvencies to the forefront of supply chain risk management in 2019. “Supplier insolvencies are set to rise as small producers continue to be casualties of economic uncertainty and structural change,” Resilience360 said in the report. This means many lower tier suppliers may be forced to adapt their business models, or companies may have to seek alternative suppliers in some situations.

Region-by-region, hotspots for cargo theft in Europe are in Germany, Belgium, and the Netherlands. In Latin America and the Caribbean, hotspots for cargo theft include major ports in Costa Rica; Trinidad and Tobago; Colombia; Venezuela; Piura, Lima and Callao in Peru; Chile; Argentina; and Brazil. And in South Africa, the hijacking of cargo trucks and the rail networks is an especially common occurrence in the large metropolises and port cities of Johannesburg, Port Elizabeth, Durban, and Cape Town. In Africa, piracy continues to be a very real threat, particularly in the Gulf of Guinea, with cargo ships and tankers being primary targets.

Port congestion also pose a major supply chain risk, causing significant shipping delays. In some parts of the world—like China, India, and the Philippines—port congestion is predominately caused by adverse weather conditions, while in South Africa and Nigeria, war and terrorism-related incidents can result in port or ground transportation disruptions, sometimes preventing entry into, or exit from, a city’s port, according to Resilience360. In other parts of the world, widespread strikes, protests, and riots are the cause of disruption, such as what’s happening in France with the “Yellow Vest” protesters.

8. Container ship fires. Several major container ship fires in 2018 and early 2019 highlight what continues to be a growing risk for maritime-dependent supply chains. Two high-profile examples include the Maersk Honam fire in March 2018 and the Yantian Express fire in January 2019. According to insurance company Allianz, numerous factors cause container ship fires, including “the adequacy of fire-fighting capabilities, ongoing problems with misdeclaration of cargo, salvage challenges and how long it can take to access ports of refuge.”

Industrial fires and explosions, which tend to cause ripple effects on downstream manufacturing industries, should also be on the risk radar of supply chain leaders. In the Asia Pacific region, for example, short circuit faults, machine overheating, and carelessness in working areas are the common causes of industrial fires, according to Resilience360. Such incidents highlight how important it is to know what safety precautions are being taken in the plants and facilities within the supply chains.

9. Border battles. In the United Kingdom, looming uncertainty over post-Brexit trade policies creates questions as to what new tariff and customs regimes might look like, and how those new regimes may affect and potentially reorient U.K.-affiliated supply chains. “Companies face the immediate risk of increased costs and border crossing wait times, especially in the period where customs agents are adapting to new processes,” Resilience360 said in the report.

Operationally, all supply chains dependent on U.K.-based suppliers or EU-U.K. lanes will be forced to develop contingency plans. “Companies are taking action already because they can’t just wait and see,” Woitzik says. Many companies are shifting not only their production but also their distribution facilities from the U.K. to mainland Europe, especially to the Netherlands, he says.

“We’ve also seen efforts in using alternate routes because of fears around port congestion,” Woitzik adds. For critical goods, especially, companies may want to think about shifting to air and freight transportation between the U.K. and EU in case of port congestion, he says.

10. Drone risk in the aviation industry. “Airport disruptions related to air traffic safety are likely to become more frequent in 2019, and thus present a greater risk of disruption to aviation logistics operations,” Resilience360 said. One of the hardest hitting incidents occurred in December 2018, when multiple drone sightings resulted in the closure of London Gatwick Airport, wreaked havoc on over 1,000 flights for over 33 hours. Airports all around the world, however, have also reported cases of near-misses with drones, including in the United States, Canada, China, France, New Zealand, and Poland. Air traﬃc controllers are the first line of defense and can play a risk-mitigation role by immediately reporting drone sightings over radio air traffic communication frequencies.

When thinking about the top 10 risks for 2019, how prepared are companies when it comes to mitigating supply chain risk? “Overall, companies are not very prepared,” says Resilience 360 Chief Executive Officer Tobias Larsson. They don’t often have an enterprise-wide view of their supply-chain risks.

Companies with a truly best-in-class supply chain risk management strategy are those that proactively plan for disruptions by using advanced predictive analytics to assess what disruptions could occur down the road. That way, when disruptions occur in the supply chain that demand an immediate response, the company and its customers will have thought about its strategy well beforehand so that they won’t be caught off-guard.

“The main thing you can do is get information out on time,” Larsson says. Giving your customers time to respond accordingly to supply chain disruptions helps develop customer relationships. “If you do it better than your competition, you can gain market share,” he says. “Even if you’re in tough situations, that’s when the strongest companies thrive.”