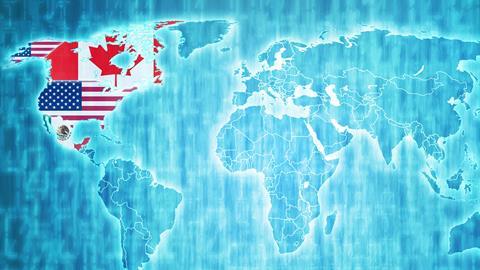 A compliance readiness plan for ‘NAFTA 2.0’

Some refer to it as NAFTA 2.0, the 21st century version of the now-antiquated North American Free Trade Agreement. But the new United States-Mexico-Canada Agreement (USMCA) is in many ways different than its predecessor and portends big changes in the global trade compliance space.

Although the USMCA requires ratification by all three countries before it becomes fully effective, and although many provisions won’t take effect until 2020, companies should start preparing now. “It takes time to understand where the impact will be and to implement measures to manage that time,” Gisele Belotto, senior manager in KPMG’s U.S. Trade and Customs practice, said during a recent KPMG Webinar discussing the USMCA. “Don’t wait to look at how this is going to impact your company. Start looking at that right now.”

The new agreement retains much of the language in NAFTA, with some important changes highlighted below:

Rules of origin. In the United States, some of the most significant changes concern the rules of origin—in particular, in the auto, textile, and apparel sectors. Under the USMCA, automakers can now qualify for zero tariffs on cars and trucks if 75 percent of their vehicles’ components (up from the 62.5 percent requirement in NAFTA) are made in the United States, Canada, or Mexico. “What this is going to do is probably force companies to look at more local parts, as opposed to buying them from China,” said Andrew Siciliano, KPMG’s U.S. Trade and Customs National Practice leader.

The Auto Alliance, an advocacy group for the auto industry, called the agreement an “encouraging development,” adding that “we have said all along that it is key that the United States, Mexico, and Canada maintain this agreement as a trilateral pact.”

Additionally, 40-45 percent of all North American vehicle production must be produced by workers making at least $16 an hour, a provision that is “mainly targeted at Mexico to bring wages up to U.S. and Canadian levels,” Siciliano said.

The textile and apparel sectors will also be impacted. The stated goal of the new provisions is to “promote greater use of Made-in-the-USA fibers, yarns, and fabrics” by limiting rules that allow for some use of non-NAFTA inputs in textile and apparel trade and requiring that sewing thread, pocketing fabric, narrow elastic bands, and coated fabric, when incorporated in most apparel and other finished products, be made in the region for those finished products to qualify for trade benefits.

The USMCA also devotes an entire chapter solely to the newly created provisions governing textile trade, specifically the widespread changes to rules of origin. The National Council of Textile Organizations (NCTO), a trade group that represents domestic textile manufacturers, said in a statement that it welcomes the agreement: “This outcome is a tangible recognition by all three parties of the importance of textile manufacturing to the regional economy,” said NCTO President and CEO Auggie Tantillo.

What has changed is that the certification can be completed by the exporter, producer, or importer, whereas under NAFTA the exporter was the one that had to complete the certificate. if the claim is based on an importer-completed certification, importers must maintain all records necessary to demonstrate that the products qualify for preferential tariff treatment, keeping in mind that customs authorities may conduct a certification audit.

“It takes time to understand where the impact will be and to implement measures to manage that time. Don’t wait to look at how this is going to impact your company. Start looking at that right now.”

The USMCA also states that each country can assist each other by sharing information during origin verifications. “This could mean—we’ll have to see—that there is going to be more collaboration between the three customs authorities as these certifications take place,” Belotto said.

De minimus thresholds. Under the USMCA, Mexico and Canada will increase their de minimis shipment value levels (the minimum value an imported shipment is subject to duty collection and customs documentation). Mexico’s de minimis threshold will double from $50 to $100, whereas Canada will double its threshold from C$20 to C$40 (U.S. $15 to $31).

Although not directly addressed in the USMCA, steel and aluminum tariffs were the subject of a “side letter,” acknowledging that the United States may impose future measures under Section 232 of the Trade Expansion Act of 1962. The letter states that the United States “shall exclude” from any such measure 2.6 million passenger vehicles imported from Canada on an annual basis; light trucks imported from Canada; and such quantity of auto parts amounting to U.S. $32.4 billion in declared customs value in any calendar year.

The American Iron and Steel Institute (AISI), the voice of the steel industry, did not directly say whether it approved or disapproved of the agreement. “We are pleased that the agreement is trilateral, as the relationship between our three countries has been extremely beneficial for the steel industry and resulted in robust trade and investment in the region over the past 25 years. This new agreement is significant, as it will keep our manufacturing supply chains strong throughout North America,” AISI President and CEO Thomas Gibson said in a statement.

The Aluminum Association, however, said it was “disappointed” that Section 232 aluminum tariffs were not addressed in the USMCA. “The current Section 232 tariffs are hurting U.S. aluminum companies, making them less competitive on the world stage,” Aluminum Association President and CEO Heidi Brock said in a statement. “By artificially raising input prices and constraining metal supply, tariffs and quotas risk harming demand, growth, and investment in the United States.”

KPMG recommends numerous measures companies should take as they prepare for the USMCA, discussed in more detail below:

Conduct an impact assessment. Look at what goods are eligible to receive reduced or eliminated duty as currently specified by NAFTA and check those against the new rule of origin in the USMCA to see whether that changes the qualification of preferential tariff treatment. “Don’t look only at the impact on what you’re doing currently, but also what’s possible under the new agreement,” Belotto said. Also, conduct a cost estimate in terms of duties paid or duties avoided under the new provisions.

To get the data necessary to conduct the impact analysis, resources include the Automated Commercial Environment (ACE) system in the United States (or equivalent “FIRM reports” issued by the Canada Border Services Agency); product masters to see what type of qualifications you have; and your bill of materials, for example.

Take a holistic approach. The changes around the new agreement are not happening in a vacuum, and thus, “you need to look at these new inputs in the context of everything that is happening, including additional tariffs from China,” Belotto said. “Take all of this into account when conducting an analysis.”

Also, these measures cannot be done by the compliance trade function alone. A cross-functional team—for example, procurement, supply chain, risk, legal, compliance—should be working together on this readiness assessment framework.

Make the business case. Once an assessment has been done and everything documented, be prepared to make the business case for whatever changes are necessary to maintain compliance with the new agreement. Resources needed could take the form of internal resources, partners, and new systems. “All of these steps are things that you should be thinking about right now,” Belotto said.