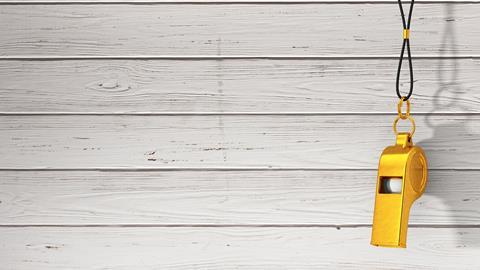 Sweeping, open allegations of fraud against major public companies in the past week raise fresh questions about the effectiveness of regulatory whistleblower programs.

Harry Markopolos, best known for having his allegations against Ponzi operator Bernie Madoff ignored for years, took his new claims of accounting fraud at General Electric directly to the open market. In a 175-page report that is more graphic slide deck than narrative, Markopolos says GE, already under investigation for other accounting issues, is using accounting games to hide $38 billion in unrecognized losses, mostly in a consolidated business unit and in the company’s long-term care insurance business. Company officials vehemently denied allegations of wrongdoing.

Markopolos disclosed early and prominently in the report that he prepared it for the benefit of an unnamed third-party with short positions in GE. That meant he and his client would enjoy an immediate payday if the stock price dropped, which it did—to a six-month low the day the report was published. He also says he filed reports with whistleblower offices at the Securities and Exchange Commission and the Department of Justice.

Soon after, another whistleblower took to the open air with allegations of inflated revenue at Walt Disney Co. In that case, which drew far less media attention, former Disney Accountant Sandra Kuba went to the media after numerous attempts to get the attention of whistleblowers, including the Department of Labor after she was fired for what Disney said was a pattern of excessive workplace complaints. Disney has also denied the allegations.

The two whistleblowers have very different stories to tell. Kuba is a former employee of the company whose allegations are based on information she accessed in her work. Markopolos is a career whistleblower relying on original analysis of publicly available information. His mishandled tips, although they eventually led to an admission by Madoff, also gave birth to the SEC’s whistleblower program under Dodd-Frank.

Their common thread, however, is frustration with whistleblower programs as executed by regulatory authorities. Disney whistleblower Kuba turned to the media when she believed her information was being ignored. Markopolos has said he’s taken eight separate cases to the SEC before GE and has never been paid a bounty.

The SEC declined to discuss or comment on the effectiveness of its whistleblowing program or the time it takes for cases to be addressed. The program awards between 10 percent and 30 percent of funds collected to whistleblowers who provide original information that leads to an enforcement action netting more than $1 million in sanctions.

Some experts believe the backlog is too much, that the SEC is too slow to investigate and process cases, giving whistleblowers like Markopolos reason to take their cases to the open market and get their compensation there. “If the SEC’s claim processing doesn’t improve, more whistleblowers may choose to follow in Mr. Markopolos’ footsteps,” says Jordan Thomas, a partner at law firm Labaton Sucharow who represents whistleblowers.

As a general rule of thumb, public disclosure of allegations ahead of authoritative investigation undermines the law enforcement and prosecutorial processes, says Thomas, in part because it eliminates the opportunity for surprise. “When you put out a 175-page report, there aren’t many surprises,” he says.

A public disclosure of allegations also often elicits a public denial, as it did in the case of GE, says Thomas. “Then it becomes much harder for the SEC and the target entity to later settle on the same grounds,” he says. “Even if they can reach a settlement, the process is far more protracted.”

On the other hand, going public with allegations can sometimes put pressure on authorities to investigate, says Thomas. That was Kuba’s presumed objective with her recent pursuit of media attention. It can also prompt others who have information about wrongdoing to come forward, he says.

Some have criticized the Markopolos report not only for its content but also for the apparent motivation for issuing it. Larry Culp, chairman and CEO of GE, called it “market manipulation—pure and simple.” That might be a difficult case to make, says Lawrence West, a former SEC enforcement official who now counsels whistleblowers.

“Illegal market manipulation in an area like this requires material false statements at least negligently,” says West. “It would be surprising if a market manipulator submitted statements to the SEC under penalty of perjury and went public about being involved in short selling.”

Anne Hayes Hartman, a partner at law firm Constantine Cannon who also represents whistleblowers, says the SEC’s whistleblower program has been very effective. While Markopolos’ approach is not common, it’s also not wrong, she says.

While some have said Markopolos’ compensation when the GE stock fell raises questions about the credibility of his claims, Hartman does not share that view. “There are short position folks out there all the time trying to spread negative information about companies,” she says. “He was very public about it, and the readers can evaluate it on their own.”