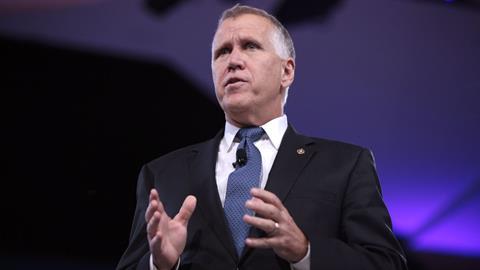 A new bill intended to block CECL is awaiting action in the Senate Banking Committee, much to the delight of big banks.

Sen. Thom Tillis (R-N.C.) introduced a bill to require the Securities and Exchange Commission and other federal agencies to study the economic effects of a pending new accounting standard on credit losses before it would be allowed to go into effect. Written and codified by the Financial Accounting Standards Board, the new standard is scheduled to take effect for calendar-year public companies beginning Jan. 1, 2020. FASB declined to comment on the new legislation.

Banks began appealing to FASB, the SEC, and even the U.S. Treasury to take a closer look at how the new standard would affect lending patterns, especially during economic downturns. They believe the accounting, which requires lenders to book losses on loans even before they happen, would curtail lending, especially for riskier borrowers during riskier economic periods.

While FASB and its overseer, the SEC, have so far taken no action to the CECL adoption time line, the concerns about reduced lending got the attention of several members of Congress, who have joined in the call for delay and further study. A bill introduced in late 2018 by Rep. Blaine Luetkemeyer (D-Mo.) failed to gain any traction.

Tillis’ new bill in the Senate appears to focuses on the concerns over lending levels rather than any compliance complexity banks may be facing. It is sitting on the agenda of the Senate Committee on Banking, Housing, and Urban Affairs awaiting action. The full text of the bill has not yet been published.

The American Bankers Association issued a statement applauding the new bill. “This important legislation would require FASB to delay the implementation of CECL until a quantitative impact study can be completed that can assess the new accounting standard’s true economic impact,” said Rob Nichols, ABA president and CEO.

A handful of large banks have indicated they will make significant increases to their loan loss reserves as a result of the new accounting, including Citigroup, which says its reserves will rise by 20 percent. “Only a rigorous quantitative impact study conducted by regulators can properly assess the effect this new standard will have on financial institutions, their customers and the broader economy,” said Nichols.