Financial statement restatements by public companies declined in 2020 to their lowest level in 20 years, according to a recent study.

Only 4.9 percent of public companies restated their previous financial statements in 2020, compared to 6.8 percent in 2019 and 17 percent at the highest point in 2006. The results continued the decline in restatements observed by Audit Analytics in each of the past six years. 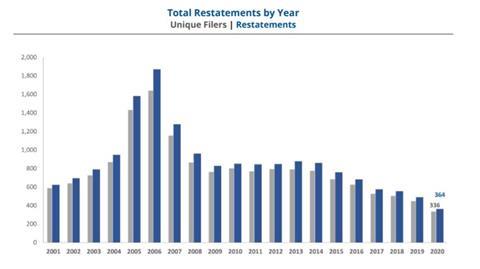 Some explanations for the decrease in overall restatements include improvement in the quality of financial reporting because of the implementation of internal control assessments and attestations, improvements in audit quality, and the higher level of restatements in the mid-2000s following the introduction of Sarbanes-Oxley reforms. There is also the potential more companies are determining errors are not material for restatement.

The report does not include the significant impact of special purpose acquisition company (SPAC) restatements in 2021, which Audit Analytics anticipates will result in a record number of restatements in the near future.

The study found the largest negative restatements of the past 10 years are relatively small in dollar amount compared with the largest ones in 2002-06.

Severity: The report looked at several statistics to evaluate the complexity of the restatements, with higher numbers suggesting greater severity. It noted the timing of companies issuing additional restated financial reports in the future would change the results.

Representatives from the Securities and Exchange Commission (SEC) commented on restatements and materiality at the AICPA & CIMA Conference on Current SEC and PCAOB developments in December.

In the conference keynote, Acting Chief Accountant Paul Munter of the SEC’s Office of the Chief Accountant discussed management’s process for determining whether an identified error in previously issued financial statements is material. The materiality assessment considers not just the quantitative but also the qualitative impacts on investors, but it becomes more difficult to use qualitative analysis to avoid restatements when an error is quantitatively significant.

According to Munter, although the total number of restatements by U.S.-based public companies has declined each year for the past six years, “little r restatements” as a percentage of total restatements rose to nearly 76 percent last year, up from about 35 percent in 2005.

Munter also noted the SEC’s rulemaking agenda includes recovery of erroneously awarded incentive-based compensation to current or former executive officers based on financial information that was restated. In October, the SEC issued a release that reopened the comment period for 2015 proposed rules that would require issuers on national securities exchanges to have policies for “clawing back” excess compensation in the three fiscal years before a restatement correcting a material accounting error and to disclose the policies.

Lindsay McCord, chief accountant at the SEC’s Division of Corporation Finance, reminded participants of the need to apply Staff Accounting Bulletin No. 99 on materiality to evaluate the need for “little r” versus “capital R” restatements. “Capital R” restatements can require amended disclosures in SEC filings about disclosure controls and procedures.